Powered by the Dead: Gein and the Graverobbers 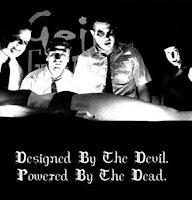 Gein and the Graverobbers

Gein and the Graverobbers found me through MySpace a few years back, right around their ‘Passion of the Anti-Christ’ release. The few songs on their page led me to an easy purchase. I hadn’t gotten that involved in either spooky or surf music. I had seen Los Straitjackets a few months earlier when they played in Albany, where I was living at the time. But that was about it – the Ghastly Ones were still on hiatus and I hadn’t really bothered with finding anyone else. Gein and the Graverobbers rekindled what The Ghastly Ones started.

Gein and the Graverobbers were seriously frightening when I first saw them play. They were the reason why I hit up Drop Dead, which led me to The Crimson Ghosts and a couple other good bands. But I was there for them and man, they did not disappoint.

There’s something intimidating about the group when they get into it, like that deep-fear I felt when I saw ‘The Texas Chainsaw Massacre’ for the first time. There was fear tempered with adrenaline and a sense of respect for the natural order of things. Those kids had to die, and this band had to play. The music of Gein and the Graverobbers are, in a way, as natural as death and that’s what made that first impression so powerful. Ever since then, they keep getting better.

Gein, when he gets in his mood, will walk right up to you and stare you down. Back then, they had a bassist named Kemper who seemed to hate breathing and all those who did it. Sloth, the drummer, comes off as the opposite, as a man who is happy that everything dies. And Myra, the only word that pops to mind is ‘vicious.’

Outside of the characters that they play, the band comes off as really nice and friendly. Times that I’ve said ‘hi’ to them, they’ve been extremely grateful for any and everyone who has shown up to see them play.

Currently, The Rev plays bass for them. He’s also in the band Mongrel, which makes him a great fit for the Graverobbers. Gein plays in The Crimson Ghosts but also in Black Pyramid. Myra has her band Ghoul’s Night Out, which I’ll cover in this month since they’re awesome, but she also does all the layouts for each Necro-Tone release.

Funny thing about the entire Necro-Tone family: they kind of introduced a sense of reality to my ignorant ass. When the Crimson Ghosts played 4th Street in Troy, I went up to talk to Gein for the first time. I told him that I was a fan of his work and that I thought both ‘The Haunted House’ and ‘Transylvania’ were some of the best sounding songs I have ever heard. Both cuts were from their ‘Songs in the Key of Evil’ album, but I didn’t know that one was an Iron Maiden cover.

It was that at that same show I was surprised to find out that these guys still had jobs. The reality that these guys were doing this as what they loved but still spent forty hours a week at a straight job smacked me right in the face. I don’t know if that’s still true today, and I would hope that one day, everyone in the band can rely on their art to pay the mortgage.

The early Gein and the Graverobbers releases have been out of print for a while. Necro-Tone records recently produced ‘The Gruesome Twosome,’ which is more of a ‘Terrible Three-Way’ since you get ‘Humanoids from the Deep,’ ‘Songs in the Key of Evil,’ and ‘Passion of the Anti-Christ.’ Bargain Deal on Evil. Hit them up and buy a CD. See them if you can.