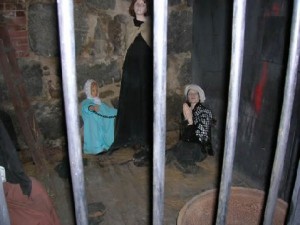 No, this isn’t the similarly-named horror movie museum in Connecticut. Instead, it’s a Salem, MA-based museum devoted to the Salem Witch Trials. I visited the Witch Dungeon museum as part of a school field trip back in the early 2000’s, probably since my English class had studied The Scarlet Letter and The Crucible. All I knew about the museum at the time was that it had a reenactment of one of the infamous Salem witch trials, using an actual transcript from 1692. Little did I know was that it would be one of the oddest museums I would ever go to.

The Witch Dungeon Museum is the only museum I know of which doesn’t have any “artifacts” on display (or placards, for that matter). Even the now-defunct “Terror on the Wharf” haunted house in Salem tried to live up to its “Museum of Myth and Monsters” subtitle by having some horror movie memorabilia in the waiting area and some placards placed in the first few areas of the haunt itself.

I remember being surprised both by this and how my classmates and I were immediately herded into a small theater. I expected that the reenactment would be the last part of the of the museum, not the first. After all, it would be a natural climax to an hour or so of looking at old historical items about the trials. But there were no such items, just a small theater with a courtroom set up onstage (and some static supporting cast dummies). Soon the costumed cast came out and performed their little five minute reenactment. It wasn’t destined for rave reviews, but it wasn’t terrible either.

After the trial ended, we were ushered into the “dungeon” located in the basement of the museum by our factoid-dispensing tour guide. The winding dungeon contained displays showing things like Giles Corey being pressed to death, the incredibly small cells the accused witches were kept in (complete with dummy captives) and innocent people being tortured and hung. There was much surprised muttering amongst the group upon passing a display where some people in Spanish Inquisition-style pointed hoods were uncomfortably close to the hanging victims. This brought uncomfortable thoughts of racial prejudice and the Klan to mind. All of the previously-mentioned displays were rendered using the same type of (as far as I could tell) papier-mâché dummies from the play. Thankfully, the dark lighting and moody atmosphere made them slightly less laughable than they would have been in regular lighting.

While a friend and I were debating whether or not a figure in a dark cell was a live person waiting to jump out at us, we heard a piercing scream from a girl in the group ahead of us. Word quickly spread that she had seen some kind of ghostly figure; the consensus being that it was just part of the museum and not a “real” ghost. This would be eclipsed later in the day during our trip to the House of Seven Gables, where someone caused a screamfest by making a joke about a bat attack when a long line kept us stuck in a dark hidden staircase.

Later in the tour, not long before the exit, I (barely) noticed another ghostly effect going on beside me. Or perhaps it was a repetition of the same effect from before, I’m not 100% sure since I never got to ask the girl what she saw. Due to the limited nature of those scares, I am not going to spoil anything for potential visitors by telling what I saw. If you walk slowly and keep your eyes peeled, you should have no trouble seeing the dungeon’s ghosts. Although those effects would not make the basement tour “hack it” as a standalone haunt, it was a neat little surprise for a haunted house junkie like myself. After the tour ended, we were cleverly dumped into the gift shop. I remember a lot of knick-knacks, postcards and books, along with some hilariously named “Witch Balls” (hanging glass ornaments). Although I originally thought they were just regular ornaments with a new name slapped on to cash in on Salem’s history, I have since learned they were a real folk tradition!

Not having been to any other witch museums, I can’t say where the Witch Dungeon ranks among them. I’d definitely like to check them out before seriously vouching for visiting the Witch Dungeon Museum. That said, I imagine that while other museum might have more artifacts and historical information, the Witch Dungeon Museum is probably much more fun. If you’re a teacher looking to give your students a little surprise while you’re all in Salem, a trip to the Witch Dungeon Museum isn’t a bad way of going about it. As for non-academic trips, I can’t recommend going there solely for the dungeon tour. There are much better (in my opinion) haunted houses in Salem to spend your money on (Hint hint).

It’s nothing personal against the museum itself, as it’s not like they’re in business as a haunted house. In fact, I greatly appreciate their throwing some haunt-style touches into the mix. It’s just that the museum doesn’t really impress me enough to recommend it highly. If the museum was longer, the effects/dummies were upgraded and/or the prices were lower, I would feel differently on the matter. Being a fair man, I won’t rate it using the system I use for haunted attractions. Having said that, it is worth visiting if you get an off-season urge to visit a haunt or if you purchase the special combination ticket. Said ticket is good for the Witch History Museum, the New England Pirate Museum and The Witch Dungeon Museum and the savings works out to a discount of about $5 per person. You can find more information about the ticket here.

UPDATE: It turns out the dummies I had thought were papier-mâché are actually wax figures! Although considering how amazing papier-mâché figures can look, maybe I would have been more impressed by the museum’s figures if they actually had been made of papier-mâché.

Special thanks to the Witch Dungeon Museum for use of the image!

Bad Behavior has blocked 1147 access attempts in the last 7 days.