It comes down to this.

Tales From The Crypt 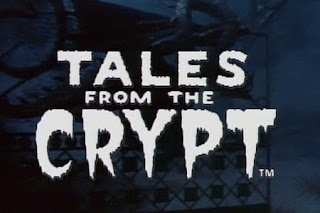 Though its initial run on HBO ran from 89-96, I didn’t catch ‘Tales from the Crypt’ until syndication since I didn’t afford the premium cable. But when it finally was distributed among the networks, I lived far up north that I caught it on a Canadian station that played in hour-long chunks every weekday at midnight.

I didn’t make the connection then, but I had come across, not Tales specifically, but the Tales format through those old comic books once given to me by a family friend. In between the superheroes and mutants, there was a plethora of ‘House of Mystery,’ ‘Grimm’s Ghost Stories’ and ‘The Witching Hour’ issues.

Much like horror hosts, the segments before and after the feature presentation took the edge off. Groan inducing punnery will take the sting out of any scare. Though most of the episodes weren’t terribly frightening; in fact, some very hackneyed, with the twist being either straight out of nowhere or seen from a mile away.

Though stripped of its nudity and profane language, the whole attitude of the show remained intact when I watched it for the first time. Lately, I’ve been going over the old episodes, seeing the ones I’ve missed and revisiting the ones I saw before. On a whole, I would say that it’s a series that has aged well. I’ll have to do some digging to see the history behind the show before I put up any episode reviews. Personally, my favorite episodes aren’t those that deal with the supernatural. I like the ones that deal more with the monstrosity of the human condition. Though the ends are gruesome, they’re not that far removed from the realm of possibility. They’re usually the episodes that are written better (and much easier to watch.)

You can get all seven seasons for under two hundred bucks (less if you purchase used) on Amazon. Definitely worth the rental.

Also, if any of you readers out there can do me a favor – when it didn’t run in an hour’s chunk, there was a sorta-news program that ran before/after Tales From The Crypt on CBC 6. It dealt with a lot of paranormal activity, weird shit ’round the board. Trying to remember what the name of that program was and track down some episodes of it. Any clues can be sent over to me or the Front Office. Thank you kindly.