My town of New Haven holds a Grove Street Cemetery, which I wrote about before. The gates beckon that THE DEAD SHALL BE RAISED. While walking there recently, I decided to snap a few pictures. You’ll find that there are a couple plaques on the welcoming lodge up front.

New Haven isn’t the most spooky of New England Towns, though it’s getting pretty scary due to the rising random-death-by-murder rate. Fuckers be dying around here for no real reason. I keep asking “what the fuck is happening to New Haven?” but I guess it’s always been like this. Dei Gratia.

At the Grove Street Cemetery, you’ll find some plaques. The first one isn’t all that special, more or less establishing that this graveyard is important to the town. There are some other gravesites out on the edge, more towards Westville, East and West Haven. If you want your body buried right in New Haven, Grove Street is where you want to go. 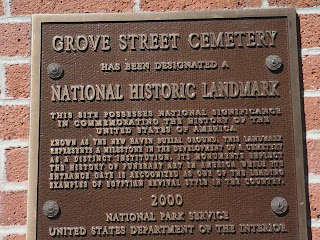 *
By the grace of god, or ‘Dei Gratia.’ When I have some free time and the weather isn’t miserable, I’ll have to snap some pictures of the actual graves. It’s a nice site that’s well kept. 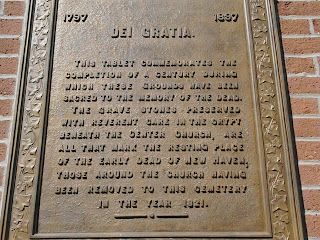 *
Here’s the real reason I took some pictures. New Haven is home to Yale, which in itself has enough freemasonry/Skull and Bones/Secret Society cultism to keep any person busy. Walking by, I happened to spot some chalkings that seemed interesting enough. 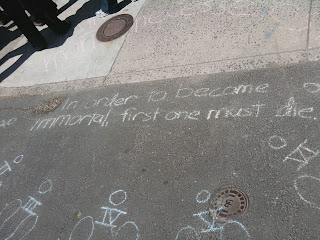 *
I didn’t bother to take any pictures of the Latin above it, since it said the same thing.

IN ORDER TO BE COME IMMORTAL,

FIRST ONE MUST DIE.
Eh. I wouldn’t really lose my shit over that. Yeah, the coupling of opposites – yeah, big fucking deal. If you want to be spooky, but out some fucked up opposite-coupling, like so:
That is not dead which can eternal lie. And with strange aeons even death may die. 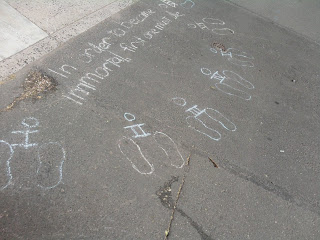 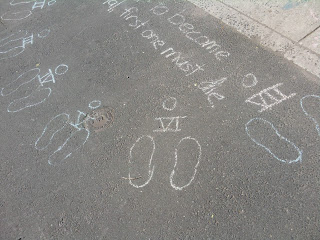 So what we have here is seven size-10 footprints outlined in chalk in a half-circle with some vague crypto-cultish bullshit in front of a cemetery that has THE DEAD WILL BE RAISED welcoming you. Either I smell some drama-club level initiation bullshit or some kids decided to be some level of deeeeeeeep which in our world, deep is only measured on how far down you want the body.
My home town. Spooky and fucked up but I love it.

Bad Behavior has blocked 707 access attempts in the last 7 days.