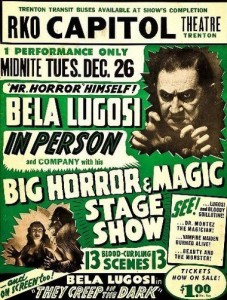 While looking through the online preview of Gary Don Rhodes’ excellent Lugosi: his life in films, on stage, and in the hearts of horror lovers, I came across a reference (#57) to a never-realized 1948 spook show featuring Bela Lugosi. The idea of him doing a spook show did make sense. After all, he did have his own coffin and theatrical producers would cast him in plays in order to cash in on his name. These would tie in perfectly with the world of the spook show.

What is a spook show? Spook shows grew out the phantasmagorias of the 18th century, where “magic lanterns” (an early form of slide projector) were used to create images of specters and skeletons on screens (or smoke) in darkened theaters as the show’s host would pretend to summon the dead in fake magical ceremonies. Multiple projectors, often on moving platforms and using glass slides with moving parts, were used along with sound effects to heighten the effect. Fully describing the history of phantasmagoria could easily take up this entire entry, so I instead invite readers to look at the two part “The Lantern of Fear” article at Grand Illusions.

According to writer Sid Fleischman, the spook show arose from the Great Depression as a way for movie theaters to “sell seats” at a time when movies usually weren’t played, usually after midnight. Spook shows usually consisted of someone performing spooky magic tricks, followed by a showing of a horror movie. After the film ended, the theater would “black out.” Scary sounds were heard while glowing bats and ghosts would fly around in the area, monsters would roam the aisles grabbing at people and various items would be thrown at the audience. In reality, the bats and ghosts were either projections, painted on fabric in luminous paint (held aloft on a wooden beam by hidden assistants) or glowing pictures painted onto balloons that were inflated and then released. Thrown items like string or puffed rice(!) were used to simulate spider webs and glowing ping pong balls were used to create glowing eyes. Do I even need to explain how the sound effects and monsters were created? Besides offering some Halloween-style fun, the black outs were also popular since they presented a socially acceptable way for teen couples to grab at each other in the dark.

Spook shows became so popular that sometimes a promoter would book two shows at the same time and have someone transport the film from one theater to the other via bicycle. This led to the practice being called “bicycling.” Sometimes even the people playing the monsters were even “bicycled” between theaters! Although some spook shows played (and advertised) the film they used under its real name, it was not unheard of for films to be retitled or merely billed on the posters as a “horror movie.” This was done for several reasons: to build interest in the show by implying that a new movie would be shown (or to hide the use of an awful film) or to allow the promoter to use whatever films they could get ahold of during the tour without having to change the movie listed in the advertising.

Bela Lugosi made his spook show debut in 1941, as part of a “One Night of Horror” publicity stunt for the premiere of Invisible Ghost (which also starred Lugosi). Despite the name, the show actually continued for the rest of the week (#18). Although he seemed to look down on the concept in an interview with a reporter, he had definitely warmed up to the idea six years later. In the February of 1947, he appeared in the “A Nightmare of Horror” spook show (as noted in items #25-26). Advertised as “Dracula the Batman,” he shared the stage with someone dressed as Frankenstein’s monster and “turned into a bat.” Presumably he was able to sneak offstage and get replaced by either an animation of a flying bat projected onscreen or by the classic fake bat on a string trick. Later that same year, he toured with Bill Neff’s “Madhouse of Mystery” show. His appearance during the 1948 premiere of Abbott and Costello Meet Frankenstein was similar to his act with Frankenstein’s monster in the “A Nightmare of Horror” show. 1951 brought the biggest one yet: “Bela Lugosi’s Horror and Magic Stage Show.” Having showtimes at both 8:30 and 12:00, the show played throughout New York and New Jersey (although most theaters opted to only do the 8:30 show). The show had loads of publicity, from announcements in Variety the previous year to ads with a “vampire’s eye” that could give a person free admission (if it turned red when they breathed on it). After a screening of They Creep in the Dark (really just The Ape Man with a new name), Bela would rise from a coffin and start the show. Said show included plenty of eerie illusions and monsters, including a “gorilla” named Ygor. In spite of this, show wasn’t well received and Lugosi ended the show in order to play Dracula in a British stage show. His final (documented) spook show appearance was a tour with Kim Yen Soo in 1952 (#38).

So what happened to the once popular spook show? A variety of factors led to its demise. What started out as some shows switching around the order of when the movie and magic acts began eventually led to some spook shows consisting of merely a magic act (as noted in the excellent Ghostmasters: A Look Back at America’s Midnight Spook Shows by Mark Walker). How wants to go to the movies at midnight to see a magic show? The general public eventually became accustomed to higher quality special effects onscreen than spook shows could offer. Glow-in-the-dark paint and rubber masks just couldn’t compare to Industrial Light & Magic level effects. As megaplexes became the law of the land, individual movie theaters (and screens) became smaller. This left little to no room for a spook show. If you ever want to see the way things used to be, go to the Coolidge Corner Theatre in Cambridge, MA (or this image of a theater in Florence, Italy) and compare it to what you’d find at a general theater chain. The difference is astounding. It’s also possible that fears of lawsuits over the “monsters” manhandling or injuring people in the dark (or vice versa) might have made spook shows less attractive to theater owners.

However, a select few have created modern day spook shows. Vermont horror host Davey Horror used to have a “Spookarama” show every October, although this sadly ended after he retired. Thankfully, the Silver Screen Spook Show is still active. Although the spook shows of old often didn’t allow children in, the Silver Screen Spook Show does offer special children’s shows. Presumably these shows exclude the burlesque act that’s included in the regular show. Although not traditionally part of spook shows, I doubt that Bela would mind. After all, he had been known to appear in such shows on occasion!

Bad Behavior has blocked 3309 access attempts in the last 7 days.