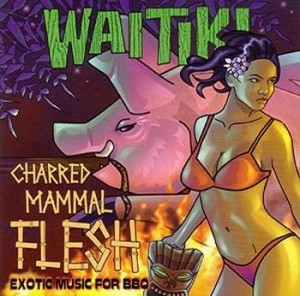 In our last exotica installment, I shared a story about the origin of the song “Bwana” (and about the use of animal calls in exotica) that had been told to me by an exotica musician. Since he went unnamed in that in order to help build interest for this particular installment, it’s time to give the man his much-earned credit: Randy Wong, the founder of the band Waitiki (and Waitiki International LLC).

Waitiki was formed in 2005 with the goal of introducing (and reinventing) classic exotica music for the listeners of today. Their debut album, Charred Mammal Flesh (subtitled “Exotic Music for BBQ”) shows the band’s method of going about this: a mixture of covers and original music.

And what exotic music it is! The liner notes instruments including (but not limited to): upright bass, vibraphone, marimba, melodica, and reeds. Given that I have no idea what some of those instruments sound like, some of my music descriptions are based on my best (careful) guesses. But while I don’t always know what I’m hearing, I do know what I like!

The album opens with Waitiki’s take on “Bwana,” which they call “Bwana, Bwana A” here. Not only does its use act as a tribute to Arthur Lyman’s music, but I was also informed that it was also a reference to how Lyman used it to open his shows. After the mysterious-sounding flute introduction, we get the drums and cry of “Bwana.” Due to the band’s numbers being smaller than Lyman’s the returning cry lacks the “oomph” of the original. This has the unintentional effect of making it sound like a tribe in a B movie, where a handful of actors and actresses have to seem like an entire village.

However, this does fit in with the humorous tone of other material on the album and what comes afterward provides a great sense of power. Gone are the happy melodies, native chatter and bird calls of the original. In their place are heavy-sounding, warlike drums. This ties in with the loose storyline connecting the songs that’s given in the CD’s liner notes, where it is explained that a tribe is getting ready for battle.

Also according to the previously mentioned storyline, tribesmen are investigating the “Cave of Uldo” due to the sinister sounds they hear coming from it. Although there are occasional creepy notes at beginning, the rest of “Cave of Uldo” has a somewhat symphonic feel to it and makes great use of a Cajón drum and vibraphone. Next comes Waitiki’s version of “Manila,” Martin Denny’s tribute to the capital of the Philippines. Both bird calls and monkey cries come into play here, along with a flute, vibraphone and some light drum work. The complete effect is very smooth and soothing. Denny’s “Primativa” is a little more energetic and faster paced than “Manila.” The percussion and vibraphone beats mix in with bird calls, monkey calls and primal cries.

“Satyritar” makes great use of guest violinist Helen Liu’s talent, along with the chanting and “magic” sounding chimes interspersed through it. A violin might seem like an odd choice for an exotica instrument at first, but let’s not forget that one was used in Arthur Lyman’s performance of “Beyond the Reef” Despite being inspired the lusty Greek goat-men of myth, it can have a “Middle Eastern” feel at times.

“Fuzzy Mammoth Breath” is an intentionally funny song that starts with the singing/chanting of the title (and noting the eating of charred mammal flesh) with similar chanting about watermelon sacrifice overlapping. We then get an instrumental break featuring percussion and reed work followed by the “Mayor of Exotica” doing sacrificial ritual with natives hooting and hollering. Drums come in and it later returns to style of the beginning, only with some of the lyrics mixed around. Some might complain about the silly tone but let’s face it, you simply can’t do a serious song about sacrificing watermelons.

“Dew Drop Inn, If You Please, My Humming Flower” starts with a quick performance of “Chopsticks” and several gong strikes, which then leads to drums and jolly, jazzy feel. “Plamingo Flagoda” has somber opening featuring percussive beats enhanced by occasional vibraphone use. The mood then gets peppy for a little bit and goes back to original tone then gets happy again with its use of a vibraphone and reeds. Lather, rinse and repeat until we reach the reed-heavy ending.

“Flower Humming” by Don Tiki songwriter Kit Ebersbach starts with some drums and the dreamy mix of vibraphone and reeds does sound very similar to humming at times. In fact, it has a jazz feel to it. There’s also minor use of maracas or guiros and it really revs up toward the ending phase. “Merry Adventures of the Sleepy Space Kadet” is a light and pleasant tune made up of drums, vibes, an upright bass and a ukulele. Nothing in the song itself sounds spacey, but it is like a sweet dream. Apparently, it was inspired by Auntie Alice Namakelua’s “Fourteen Figures.” “March for Chief MauMau” is an honest-to-goodness exotica funeral march, complete with the sounds of marching feet! The mournful clarinet appropriately expresses the sadness over his loss, while militaristic drum beats celebrate the status and power of the deceased chief.

“Mr. Ho’s Yummy Hut Yee-Haw” is a super goofy tip of the hat to the “Yummy Hut” restaurant in Somerville, MA. The opening drums and light use of gongs or cymbals soon give way to chanting of “Yummy Hut” followed by a high pitched “Yee-haw!” This is followed with cartoony sound effects, silly lyrics and puns about menu items at Chinese restaurants mixed in with some minor vibe work. “Pan-Xotik-Da” is a very, very catchy song whose refrain is a reference to a classic pun about a panda’s diet. Drums mix with overlapping singers, and a vibraphone break brings us to an instrumental section. Guiros and reeds mix with the occasional “Bam-boooooooo” chant up until the big closing.

“China Fan” is a tune that’s just as relaxing as a fan on a hot day. Percussion leads in to reeds and vibes, along with dreamlike chimes and the sounds of waves that lead in to the final track. Said track, “Sweet Pikake Serenade,” is a very Lyman-style work where the sounds of waves and seagulls vibes both lead into and are mixed in with the sounds of a vibraphone. According to the liner notes, a “pikake” is a “Hawaiian flower whose scent is a nostalgic reminder of old Hawai’i.”

When you think about it, the titular phrase “Charred Mammal Flesh” is an accurate and yet somewhat spooky way of stripping down a barbecue to its basic elements (along with the huge pig skeleton on the back over). It also signifies a musical way to add a little extra fun to your next cook-out. That way, you and your guests can both enjoy fine music and chant along with the Mayor of Exotica while you sacrifice a watermelon of your own!

Stay tuned, because there’s still more to this story…