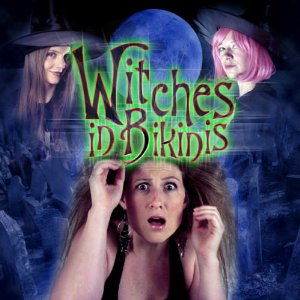 Taking their name from the first song they ever recorded, Witches in Bikinis burst onto the scene in 2005 with their songs that mix serious and silly. The combination of bikini-clad female singers/dancers in colored wigs and a trio of musicians makes for a unique musical experience, be it listening to one of their CDs or catching a live performance. Why the bikinis? Well, besides surf music being one of their influences (along with rock and pop music), let’s look at this quote by Michael Dale (from a Broadwayworld.com review of the group) that sums it up quite nicely:

For this entry, I’ll be reviewing the previously mentioned discs in a somewhat order different than what I have written above. I’m doing this in order to recreate my original listening order and because the samplers foreshadow several things about WiB’s full albums (as effortlessly switch from one musical genre to another).

The sampler All Hallows Eve contains a single song of the same name. It begins with a slow fade-in to spooky sound effects, which are soon joined by a mournful piano (probably a keyboard set to sound like a piano). A creepy knocking-type sound is added, which eventually becomes part of an almost techno-like beat when the music gets more dance-like. After the refrain, wherein “All Hallows Eve” is said, a lone witch describes a tale of seeing a ghostly parade one Halloween night. This is the perfect song to start off a Halloween party, as it’s creepy and you can dance to it.

Let’s move on to the Special Edition Sampler CD, which demonstrates that most WiB either have only one witch singing or have a witch backed up by the other members. “Kissy Kissy Love Spell” is an example of the latter, which features a rousing opening. It’s very catchy, although the fun is kinda diminished when you realize that the song is someone openly flaunting their plan to use magical equivalent of roofies on someone. Despite the name, “Freak Show Safari” has nothing to do with sideshows. Instead, it focuses on people who choose to modify their bodies and dress outside the norm. It has a heavier feel to it than “Kissy Kissy Love Spell” and the lone singer’s intensity gives it a vaguely punk feel. The band’s surf influence is on full display in “Alien Surfer Babes,” from the “Wipe Out” style intro to its other classic surf touches (You’ll know what I mean when you hear it). The witches providing back-up are used to great effect, especially when providing the “oooo” sounds emphasizing the song’s sci-fi nature. The final two songs on the disc, “Vegan Lover” and “Movie Star,” prove that Witches in Bikinis aren’t limited to scary stuff and can do material about being in love (this will come up again later).

Something that particularly strikes me about their debut album, Witches in Bikinis, is the heavy use of a keyboard. This is merely an observation and not a slam at its use, as its sound is changed from song to song. Sometimes it sounds like what you would expect a keyboard to sound like and at other times it sounds just like a real piano or organ. In contrast, the use of the guitar is rather subdued and often subtly mixed in with the drums.

The first song, “Hold Me, My Little Ghostie,” makes great use of a comical faux Russian accent (and faux Russian music). The cutesy horror-themed references to kissing and cuddling are bound to be adopted by many who listen to the song and are undoubtedly inspired by the amorous female rabbit in Bugs Bunny’s Rabbit Romeo. “Horror Flick Chicks” humorously pokes fun at the poor decision-making skills of many women in horror movies by detailing several movie-style scenarios where female characters’ actions get them killed. There’s even a segment where, after a scenario is given, the singer quizzes on the listener as to what the character did. Several life-saving course of action are given, but the question as to whether or not she did those is always “No.” It is only when the bad course of action is given that the answer “Yes” is given and the song returns to normal.

“Witches in Bikinis” is the song that started it all. The serious-sounding tale of being lost in the woods and seeing something strange suddenly turning light hearted and silly sets the the tone for many a WiB song after this. “Spooks On the Loose” takes its name from a combination of two “East Side Kids” film titles, Ghosts on the Loose and Spooks Run Wild (which some sources claim was also shown as Spooks on the Loose in some areas). Despite what the title might make you think, the “spooks” of the song are actually a metaphor for the creeps and perverts harassing the song’s protagonist.

“Haunted Mansion” tells the musical tale of a haunted house’s history (and many victims). “Goblin Gaboom” is a very cute song about a little girl trying to deal with the various monsters she sees in her bedroom. Her methods range from threats to outright denial they exist, each time answered by the deep-voiced Goblin Gaboom. The singer does an adorable little kid voice although hearing that voice come out of an attractive women in a bikini must make for an odd experience at the live shows. “Cemetery Boogie” is an insanely catchy (like many WiB songs) boogie woogie song about what the dead do after dark. Following this (of course) is “Monster Woogie.” Said song is loaded with sound effects, from the use of “castle thunder” at the beginning to the effects overload towards the end. Like many a WiB song, it’s serious at first (being home alone and hearing strange things) then the goofy stuff starts in. As soon as I heard the term “gramophone,” I know it was going to get old school and the song did not disappoint. The song was very 40’s style, right down to the Betty Boop-esque scat singing.

“Subway Spooks” is a mostly serious tale of underground ghouls that bring to mind C.H.U.D. and It. There are, however, a few humorous touches. “Zombie March,” which involves a witch preparing a group of zombies for a flesh-eating rampage, is similar in tone, only with less humor content. Abandoning humor altogether, “Cave Fire” is a very spooky instrumental number in the vein of the Midnight Syndicate. It’s perfect for any home haunt or to use to creep out trick-or-treaters. Similarly, “Graveyard Tango” is an instrumental piece, although it’s more humorous due to its tango sound. There is also a hidden surprise after “Graveyard Tango” ends: After a long wait (and on some players, the track time going in reverse) you can hear a reading of the “All Hallows Eve” done in the style of “A Visit from St. Nicholas.” 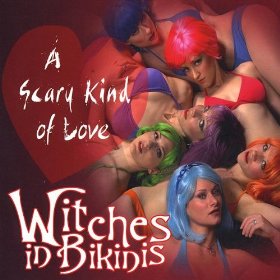 In sharp contrast to the first album, A Scary Kind of Love cranks up the guitar and lessens the keyboard use. It also allows the Witches to show their surf influences. Despite the name, “Mermaids in Outer Space” is not a surf song (although there is an “Alien Surfer Babes” shout-out). Instead, this tale of mermaids leaving the Earth is rather new wavey. “Dear Dr. Frankenstein” is a hilarious twist on the old “dead teenager song” genre, with the resourceful girlfriend of a dead drag racer seeking out the good doctor. “Video Vixen Vampire” is a rocking tribute to/parody of Elvira, wherein a vampiric horror hostess called “Vira” uses her fame and looks to lure unsuspecting victims into her clutches.

Although not an exotica song, “Calling King Kong” does share the genre’s focus on pagan passion. The singer states that although she generally prefers a man who his charming and witty, sometimes she yearns for something more primal. She doesn’t want the actual King Kong, it’s just a metaphor for the wild lovin’ she wants from her man. “O.O.B.E” stands for “out of body experience” and the song has a suitable otherworldly feel to reflect the singer’s recollection of her astral adventure. “Jennifer of the Jungle” is a non-spooky song about a young woman’s secret yearning to escape from the pressures of modern society. “Party Like a Chimpanzee” is a fun surf song about carefree partying like, well, a chimpanzee (minus the poo-flinging). “A Scary Kind of Love” is about woman’s relationship with her creepy (in a good way) boyfriend. Although her friends want her to break up with the guy, who she met at a graveyard, she’s only scared by how serious the relationship is getting rather than by his unusual interests.

“W.I.B. Reprise” is a quick, less than a minute reprise of the refrain from the song “Witches in Bikinis.” However, the minor changes in the song’s notes and slightly altered lyrics (now it’s “We are..” rather than “They were…”) make it clear that this is not a lazy cut and paste from the first album. This album’s version of “All Hallows Eve” is somewhat shorter than the sampler CD version, which seems to be missing part of that version’s long intro and outro. “Witches Theme” is the first of two closing instrumental tracks (echoing the first album) that mixes spooky and silly. Finally, the album closes with an excellent surf instrumental piece entitled “Rhumbazoid.”

So whether it’s a spooky beach shindig or a Halloween party, make sure to include Witches in Bikinis as part of your playlist!

Special thanks to Witches in Bikinis for the review copies!