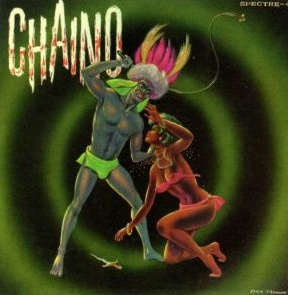 One of the most striking things about this CD is the cover, the artwork on which looks like something from a horror comic by Eerie Publications. It features an African tribesman strangling and preparing to whip a native woman in practically see-through clothing, who is in turn struggling to reach a dagger. Pretty bold stuff for a 1957 release and it is nothing short of amazing that Dionysus Records (under their Bacchus Archives imprint) was willing to use it in our modern times.

But don’t let your feelings about the cover affect your opinion of the artist or the music. If anything, let it provoke your curiosity…who or what is Chaino? According to the liner notes, producer Kirby Allan had recorded the sounds of tribal wedding ceremonies in Africa and attempted to build interest in his “new sound.” After receiving numerous complaints that the music was too repetitive, Allan decided to rework the music a bit to make it more palatable for American listeners. To this end, he teamed up with a musician whose real name is lost in time and is known only as CHAINO…

Eye of the Spectre is the first of six Chaino albums and its odd name is (according to the back cover) a reference to the “unbridled passion of love’s eerie spectre.” But that, along with the scary Tiki figure art on back cover aren’t Chaino’s only horror connections. The liner notes reveal that Chaino songs were used in low budget chillers like Night Tide and The Devil’s Hand.

Now that I think about it, those films have been released through many “public domain” DVD labels. As Atomic Mystery Monster often points out, even if we assume the films themselves are truly PD, those companies could get sued if the Chaino songs on their soundtracks weren’t created especially for the film as works for hire. If the Chaino material was created before those films, it would copyrighted separately. You see, you have to replace or license music that’s still under copyright even if it appears in a public domain work. That aside, the use of Chaino’s music in those films is still not the final horror connection…

As the title implies, “Bongos Whistling” opens with slow bongos backed by whistling. It’s eerie at first, but becomes somewhat birdlike at times. The bongos then pick up pace, with the occasional hard strike punctuating things. There’s brief harsh, angry male chant-yell before fading out…then we get a whistling solo and a big bongo finish.

“Woo Din Ese” features two bongos: one soft and steady while the other is wild and loud. Quick finger pats are mixed in with thew usual pounding slaps that fade out for the end. “Bongo Semba” has a more energetic opening than the last track, although both make use of two bongos. However, the dominant one is rather peppy in tone. It’s amazing how varied and musically pleasing the use of one type of instrument can be.

“Temba Lero” combines bongos and maracas for a pleasing beat. The bongos start out steady, but gets a bit varied in play. A few quick slaps close things out. “Sumac” offers faster, medium volume bongos and whistling followed by an angry yell, laugh and chanting. The secondary bongos get slower and more whistling appears. Not long after, more chanting and striking of bongos appears to form a very catchy beat. In fact, it sounds like the player is hitting the side of his bongos at times. The familiar angry chant returns and turns into singing…with some suggestive moaning.

“Don’t Do It To Me” has less angry chanting in small, sparse bursts while bongos build and the maracas return. We also get more moans, chanting and more bongos. It gets uncomfortably suggestive at times, but that soon turns into chanting. The bongo use more steady by that time and is soon followed by chanting and singing. A few strikes signal for the chanting to get softer while the bongos rises up and down. Things get back to normal and a chant seemingly takes us out…only for the listener to be surprised by faster bongos and singing. Things get silent, but then we get a repeat of the past events before the real ending.

“Bim-Boo” starts with an ominous gong. Maracas are combined with bamboo poles being hit to create unique sound (hence name). Mere words cannot do this justice. “Zombie Bamboos” opens with native chanting, but it’s not done by angry guy. The bongos are striking and softish, kind of like heartbeat at first, but then it gets a little louder and has more variations. You just might find yourself air bongoing at times. After a final bamboo strike, we get an eerie silence followed by a chant and a scream.

“Mating Calypso” offers a variety of percussion: steel drums, bongos, maracas and even claves. The angry guy’s chanting is fairly calm this time around. The drums soon become the focus, with clave strikes and light maraca use helping out. The chanting builds toward end with the final pounding of the drums. “Seis Nueve” features insect-like guiro use, claves and bongos. In fact, the bongo use is more varied than you’d think. There’s chanting by you-know-who at times, complete with suggestive moans.

“Afri Cuban” has a classic bongo opening. The two bongos changes up once the chanting starts. There’s also a neat echo effect on the chanting towards the end. Trust me, the song is better and more complicated than this review makes it sound. “Secret Jungle Path” begins with bongos and claves, whose strikes bring the sound of fire crackling to mind. A brief bird call or man chanting is heard, followed by bongo beats that sound like footsteps down a path. The beats are soft at times, presumably to imply secrecy. The track (and album) closes with bongos coupled with a shriek and groaning.

After finishing the album, the back cover’s reference to the “unbridled passion of love’s eerie spectre” makes much more sense. Thanks to its basis in African wedding ceremonies, Chaino’s music is alleged to have aphrodisiac-esque properties. Some might suggest that’s why Chaino tracks were used in modern TV shows and movies like Forces of Nature and Sex and the City, but I like to think that it’s because good music is timeless (even if I didn’t like what it appeared in). Sure, it might take a little getting used to, but it’s worth it.

UPDATE: Chaino has since been identified as Leon Johnson.