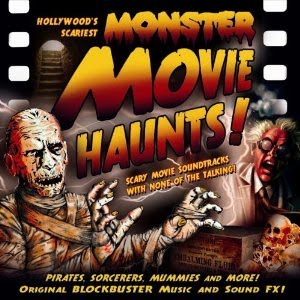 Those who browse through Halloween CDs each year may have noticed a mysterious newcomer to the field: Introsound. Initially debuting with the “Dr.Goodsound’s” line consisting of Twisted Circus of Horror Sounds, Creep Show and Halloween Haunt-O-Tron, Introsound’s newest line is Hollywood Haunts. Said line consists of albums designed to provide spooky dance music for parties (like the Halloween Chiller Dance Party! CD) and spooky music and sound effects, like the subject of today’s review. Why the name “Hollywood Haunts?” That’s because the company was started by Gary Gelfand, who has worked as both a sound editor and sound effects editor on numerous movies. Although the 2008 release Monster Movie Haunts! credits Jonathan Cooper and Ryan Teixeira with the composing duties, the reference to that work also being done by Introsound leads to believe that Mr. Gelfand also played a role in this.

The name Monster Movie Haunts! seems to stem from the concept of doing music based around general horror movie archetypes rather than covers of themes from such films. Not only does this format provide for more originality, but it also frees the composers from being constrained by the running time of a particular scene and lets them dwell on the subject for as long as their imaginations desire.

The opening track “Pirates!” might seem like an odd choice for such an album at first, but it actually makes sense. After all, several horror films have involved pirates, such as Night Creatures and The Lost Continent. Don’t forget the use of ghosts and sea monsters in the Pirates of the Caribbean franchise! The creaking of a wooden ship leads us into rousing, but things take a turn for the creepy when said music eventually gets distorted upon the arrival of the first of many ghostly “Yarrs.” Pirates shouting leads to organ comes, along with thunder more creaking effects. Drums and the initial appearance of the “Yo Ho” chorus usher in more of a sense of menace to the affair. The ending fadeout includes organ work, tolling bell, moans, an accordion shanty and bubbling effects. I’m baffled by said bubbling. Perhaps it’s a reference a pirates cooking or maybe it’s supposed to represent something sinking? It’s a shame how its rather confusing appearance takes one out of the otherwise great atmosphere that the track provides.

An evil laugh and loud, scary music kick off the eerie chanting of “Mad Mummy’s Tomb!” The tone and style later shift to a general “Egyptian” feel using flutes, gongs and the like. Although this particular section is not scary, it goes a great job of. But a moving stone lid and the screaming of a crowd signals the music to get moving lid crowd, music gets heavier and is joined by angrier chanting. A cobra’s hiss temporary takes us back back to the regular Egypt music, but chanting and more lid movements put a stop to that. The ever-building scariness is joined by a faraway yell and dripping before the roaring mummy appears. Naturally, the frightened crowd we heard earlier panics. As drums and a new “Egyptian” tone take over, we hear more of the mummy’s roars and growls as he attacks a man with a rather goofy scream. The closing of the and sounds of wind make for a very effective end. Like the one before it, I have a few issues with the effects here. Although a somewhat unusual choice, I can accept the roaring mummy due to seeing a few movies using such a vocalization. Although the large screaming crowd seemed odd at first, it actually makes sense if you assume that it’s a large expedition. Still, it would be more ideal if effects that didn’t require the listener to stop and think about how they fit in (and to have not used that ridiculous male scream). Also, the fact that the expedition sees the lid move and screams (but doesn’t flee) makes much more sense when you remember that these tracks are supposed to be looped. In other words, people will only hear some parts of the track as they pass through the scene it’s used in.

“Dragon Slayer: The Sorcerer’s Realm!” begins with tiptoe synth notes and then the sound of a clashing sword. Thing get heavier and rockin’ as we hear the roars and howls of the strange creatures the titular slayer has to battle. As thunder roars, we can also hear the breathing and slashing sword of the heroic knight, which leads to a funky beat and keyboard work. The fact that the pounding percussion sounds like a blacksmith hammering a sword is a neat touch.

“Black Forest Vampires!” is an excellent soundscape that’s easily the scariest track on the CD. Amidst the ever-howling wind, we hear flapping wings and the echoing, screaming yell-like bird calls…or are they really some type of vampire? They even sound like they’re coming closer and closer to you at times. There’s also the constant sound of creaking, perhaps from a coffin or door of an abandoned house. Speaking of which, this track could be used with any haunted house setup and not just for vampires in a forest.

The beeping music that opens “Fright Night Sci-Fi: Planet X!” initially reminded me of an old school 8-bit video game. The numerous appearances of an evil-sounding robotic voice speaking in an unknown language and spooky space effects. Although it later switches to organ-like music and a spooky theremin-like “woo” noise for awhile, it eventually fades back to the original beeping style (but with more creepy musical accompaniments). This is perfect for just about any scene involving aliens, especially if the scene involves walking through a dark and malfunctioning crashed spaceship.

“Dr. Frankenstein’s Lab: Midnight Madness!” is the longest track of the album, clocking in at a little over ten minutes. Sadly, I feel that it’s the weakest track of the album. It opens with LOUD organ music that dominates the entire track. It immediately piles on effects like bubbling, thunder, female screams, an evil scientist laughing and faint sparking. Sadly the laughing feels forced at times and when the scientist mumbles, he ends up sounding like the “Yip Yip” Martians from Sesame Street. Although Introsound wisely mixed in new sound effects to offset the repetition of older effects, choices like a witch-like woman laughing and yowling cat seem out of place despite being lumped in with zapping noises, oddball echoing monster yells, rats and a heartbeat. I think this would have worked a lot better as a soundscape. It could ope with thunder and some lab sounds, then we’d hear maniacal laughter, other lab sounds, a beating heart and a different monster groan.

Thankfully, “Bait’s Motel!” not only makes up somewhat for that disappointment, but wisely opts not to mimic the Psycho theme song. Creaking doors, footsteps, wind, soft snarling, a heartbeat and light bubbling pave the way for soft, scary music. As the synth work builds in volume, it becomes very effective and reminds me of 80’s horror movie music. The music temporarily stops for thunder, moans and yells but soon returns. There’s a steady pace to it, as the killer seems to go from room to room in a murder spree. First we hear pounding knocks on a door, then choking, a heartbeat, screams and growls followed by a deep, evil laugh. Later, a ringing guest bell, ghoulish laughter, soft chortling, whispering and bubbles (my best guess is that it’s a shower or bathtub reference) come into play for the effective ending.

“Theater of Horrors!” is the second of the album’s unofficial 80’s horror duo, whose moody, mysterious music follows knocking and a creaking door. As we hear drips, creaking doors, wind, squeaking rats and screams, the soft synth music hints at glory days long past. Despite the name, this track could work in any haunt setup or scene devoted to an old place that has seen better days.

Despite the name, “Child’s Play!” has nothing to do with Chucky. After the tinkling, music box-like intro, the sounds of a bird cawing and distant children saying “Nah Nah Nah” are heard. Suddenly, evil growls brings in louder, scarier music (which reminds me of an evil version of “Ring around the Rosie”). The use of evil laughter and circus-like drums make this track suitable for both clowns-themed scenes or an intense haunted nursery.

The overall feel of Monster Movie Haunts! is what would happen if a relative of a Midnight Syndicate or Nox Arcana-type group married one of those “spooky sound effects” CDs that pop up everywhere come October. All of the tracks have lengths suitable for use in individual looping, which is probably the most effective way to use this. Playing this entire album on a loop while handing out candy might confuse people, especially if your decor doesn’t match most of the themes suggested by the tracks. It’s a shame that the occasional use of a less-than-ideal sound effect or two in some tracks dampens some otherwise great tracks (and music). Sometimes I wonder if some of the sillier-sounding stuff was purposefully intended in order to appeal to small children who would otherwise be terrified by certain tracks. Whatever the case is, there are several excellent tracks where this is not an issue. The heavy use of sound effects might be a turn-off for some, but may please others. I recommend listening to samples on Amazon before deciding whether or not any of the tracks will be suitable for your intended use.

Special thanks to Introsound for the review copy!