Burn: Out and Up.

The haunted attraction/Halloween community is just as prone to fads and crazes as everyone else. Asylums, pirates and rednecks are only a few of the theme ideas (be it for a room or the entire haunt) that took the community by storm, both professional and home haunters. Sometimes it’s due to the success of a particular movie that sparks it (as was the case with the pirate and wizard crazes), but it’s hard to pin down what sparks the others. My personal theory is that the internet’s ability to share prop tutorials and theme ideas allows ideas to spread much faster than they could in the old days. So if one person’s setup is popular enough, then numerous people will set out to do their own version.

In the late 90’s, clowns were the big thing in haunt setups. The only problem was, there wasn’t any spooky circus music available. Countless numbers of people would post at haunt forums asking for where they could find such music, only to be told there really wasn’t any and they’d have to either snag a copy of the out-of-print Killer Klowns From Outer Space soundtrack or play scary sound effects over regular circus music. Thankfully, one home haunter took it upon himself to fill the void: Michael Hedstrom. 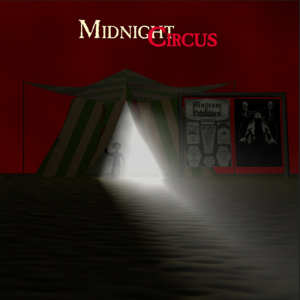 Although both Michael and his wife Tamara (best known as “Keeba” to fans of their excellent Halloween website) have been haunting their home for years, it wasn’t until 1999 that Mr. Hedstrom combined his love of Halloween and music in his debut effort, Midnight Circus.

“Clown Alley” definitely shows that Michael Hedstrom is a big fan of Danny Elfman’s work, given that it’s strongly influenced by the theme to Beetlejuice. But in addition to being different enough to not sound like a mere cover version of that song, several wacky sound effects have been layered over it. These laughs, honks and sproinging noises pop up in many other tracks (including one that uses a bouncy version of a funeral dirge). But a circus is more than just clowns, as tracks like the vaguely Middle Eastern “Temple of Temptation,” the coughing and hacking of “The Dancing Firebeasts” and the spooky “Museum of Oddities” reflect. I suspect that the Amazon reviewer who claims to use Midnight Circus in sideshow performances (like fire-eating and sword swallowing) goes to these particular tracks a lot.

“The Tunnel of Fun” takes things back to the clowns for awhile, although “Temple of Temptation II” and the snarling, growling of “Wild Animal Cages” do take the listener back to other aspects of the circus. “Midnight Midway” provides an eerie circus feel suitable for both haunted circus/carnival scenes with and without clowns. The same goes for the calliope-sounding (but likely computer-generated) “The Carousel Phonograph,” a quick along with plenty of crackles and pops to hint of being played from an oft-used phonograph record. “The Tunnel of Fun” is an effects track that compiles all of the effects previously used in other tracks. The layered nature of the screams, footsteps, heartbeats, clown effects and the like don’t lend themselves well to individual use. However, this track is great for livening up a darkened hallway or dark maze (especially if you put icky-feeling things on the walls, like pieces of hose to simulate snakes). As a special bonus preview of the next album, we get “Clive Manor.” use of march-like drums and cymbals give this a decidedly light feel, which also allows its use in a circus setting. 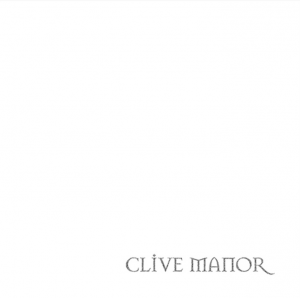 The album Clive Manor came two years later in 2001, offering listeners a musical trip through a haunted house. We start with a moody trip through the “Forest” (guess which type of scene this works best with) that leads us to an equally effective “Hidden Passage” (good for any scene needing a spooky atmosphere). “Dungeon” mixes music and the sounds of dripping and chains, making it perfect for any dank, dark location in your haunt. Although good for a variety of scary settings, “The Lost Steps” is a great way to spice up one of the few aspects of haunted attractions that don’t have music especially tailored for them: stairs. Even if you don’t do haunted houses, it’s a neat way to add a little atmosphere to your front steps. Seeing as how I already covered “Clive Manor” in my Midnight Circus review, let’s move along to “Big Game Trophies.” First I first read the track listing, I imagined spooky music with a few soft growling and roaring effects tossed in. Instead, I got amazing tribal drumming that whisked me off to a distant jungle. If you don’t have a haunted trophy room, this track also works for scenes involving shrunken heads.

“From the Mist” uses an interesting computer or synthesizer effect at times that makes me think of spectral orbs floating about. It’s not a bad track to bust out if you’re using Phantasm spheres and don’t have any music from said franchise to use. “Nursery” gives vocalist Tamara Hedstrom a chance she’s talented in both scaring and singing. As the plinking music that brings children and music boxes to mind, she occasionally urges the listener to stay and play in several haunting whispers. I wonder if this was used in their own haunted nursery scene? “Hall of Portraits” is my favorite track, as it’s really creepy and perfect to use to introduce people to Hedstrom’s work. In fact, that’s why I chose to use it in the Myspace Halloween countdown that eventually mutated into Gravedigger’s Local 16 (previously noted in my reviews of the music of Daikaiju and The Ghastly Ones). It’s perfect for use with just about any creepy scene, not just the classic “hallway full of spooky paintings.” The title of “Widow’s Walk” refers to an architectural feature alleged to be used by the wives of sailors, ever on the lookout for their long-absent husbands. The name alone adds a lot to the implied back story of the manor. But, given that most haunts probably don’t use one, this mournful tune will have to be used elsewhere. Perhaps the walk is where we spy the “Storm,” an effects track filled with thunder, rain and howling wind. I would have preferred a little more variety in the thunder effects, along with a little more space between each use of said effect, but it’s an otherwise serviceable track. Finally, a sense of urgency kicks in as the “Fleeing the Grounds” begins. It’s a great way to end the album, along with the added bonus of being useful in a scene where visitors have to run from something. 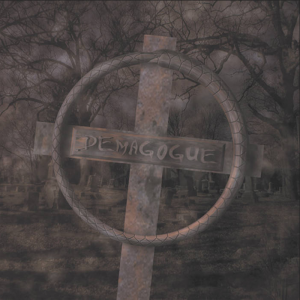 2007 brought the release of the most recent (and unique) album, Demagogue. What’s a demagogue, you ask? Well, it’s a term for a ruler who leads and controls people by exploiting the emotions (especially fear) and views of their subjects. The official website describes the album as “A dark musical journey from the birth of the universe to the death of a madman, from mysterious and hypnotic to angry and violent.”

Things kick off, appropriately enough, with “In the Beginning.” It’s a mysterious instrumental number, good for a wide variety of scenes. Both “Awakenings” and “Basic Instinct” are very moody, while “Sanctuary” and “Isolation” are both great for dungeon scenes, basements and the like due to their lonely feel and dripping sounds. You can even use them back to back if you wish. “Epiphany” is the shortest track, running just under a minute in length. It musically recreates the sensation of thinking something over until a realization suddenly occurs. If the preceding tracks represent the early life of a theological scholar, then “Demagogue Emergent” marks their rise to power using religion. The use of chanting in many (but not all) of the tracks that follow make them perfect for scenes involving cults or altars. These tracks are “The Word,” “The Order,” “Sister Mary Katherine,” “Idol Worshipers” and “Victory Prayer.” “Holy War” gets the blood pumping, with musical notes simulating the clashing of armies. Naturally, “Mourning” follows such a battle. As expected, it’s great for a funeral setting or any scene involving death. “Afterlife” makes for a fitting close to the album, given the theme.

All tracks from the above three CDs, save for “Epiphany” from Demagogue, are perfect for looping and each album could be played on a loop for any house decorated with the appropriate theme. Clive Manor has the broadest appeal due to the general nature of its theme, although “Big Game Trophies” might not work for some setups.

Michael Hedstrom’s spooky use of synthesizers and instruments should definitely appeal to fans of music from groups like Nox Arcana and the Midnight Syndicate. Those in the industry have taken note of his talent as well. Midnight Circus was used in the “Carnival of Carnivorous Clowns” maze at Knott’s Scary Farm’s award-winning annual event and on Music Choice’s “Sounds of the Seasons” channel, while Clive Manor was nominated for a JPF award. Hopefully we can expect more great things from Mr. Hedstrom (and hope they happen to him as well).

Special thanks to Hedstorm Productions for the review copies!