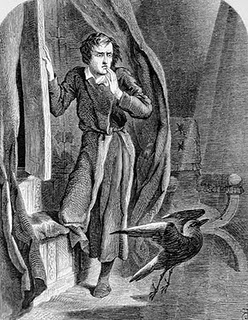 Whenever the phrase “horror fiction” is brought up, the mind invariable turns to stories. But what about poetry? It too is a form of fiction and a poem could just as easily have a horror theme instead of the expected ode to nature or romance. After all, one of the greatest literary works in the world of horror is Edgar Allan Poe’s poem “The Raven.” With that in mind, let’s look at some spooky poems by both well-known horror authors and lesser-known writers.

Although best known for his weird tales, Clark Ashton Smith has written numerous horror-themed poems including “Medusa,” “The Eldritch Dark,” “Nightmare” and many more.

Similarly, while Robert E. Howard is famous for being the creator of Conan the Barbarian, he also wrote a poem called “A Song of the Werewolf Folk.”

Michael Fantina’s “Night Terrors” is a must-read, as is Edith Wharton’s “A Grave.”

Although his wife is famous for writing Frankenstein, Percy Bysshe Shelley has written some macabre works of his own. If “The Devil’s Walk” isn’t to your liking, perhaps one of his two poems about death will?

Shelley’s friend Lord Byron also dabbled in poetry with ghastly themes, such as the apocalyptic “Darkness” “Lines Inscribed Upon a Cup Formed From a Skull.”

In addition to “The Raven,” Edgar Allan Poe composed “The Conqueror Worm,” “The Haunted Palace,” “Spirits of the Dead” and “Lenore.”

H.P. Lovecraft was very fond of Poe’s work, writing both “The Poe-ets Nightmare” and “Where Once Poe Walked” in tribute to him. He also wrote eldritch poems including (but not limited to) “Fungi from Yuggoth,” “Nemesis,” and “Astrophobos.”

You might remember Nick Mamatas from this entry about free online Cthulhu stories, which included his novel Move Under Ground. Mamatas took the various mythos-themed senryu sprinkled throughout the novel to form the chapbook Cthulhu Senryu. The Google Books preview of it offers several of these humorous, occasionally NSFW Japanese-style poems for you to enjoy.

It’s probably safe to say that most of the people reading this are more familiar with Japanese haiku than they are with senryu. The Wikipedia entry for Scifaiku both defines and provides examples of this special form of haiku. Also, Ryan Mecum has written vampire, zombie and werewolf-themed haiku that you can read thanks to the free previews at Amazon.

Bad Behavior has blocked 740 access attempts in the last 7 days.