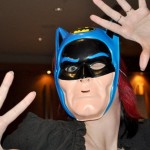 Chandra “Spooky Chan” Free is currently working on the second volume of her graphic novel series, THE GOD MACHINE. In addition, she’s also working with writer/boyfriend, Andrew E.C. Gaska, on two personal graphic novel projects: less than three, a historical-fiction of forbidden love; and Boys + Girls, regarding failed relationships from the view points of the opposite sex.

You can find her current work, THE GOD MACHINE volume 1 for sale now on Amazon or in most major chains and comic shops. If they don’t have it, ask your shop to order it! Find Spooky Chan at her official site, her Facebook page and on Twitter (both @spookychan and @TheGodMachine.)

What element of your most recent creative project was a surprise to even to you (e.g. plot twist, character decision, design), so much that reminded you how exciting and fun it is to create?

I was working on plotting out THE GOD MACHINE not to long ago and found myself surprised at the random dialog I threw in. Typically you don’t do that in plotting, but this character demanded it. It was this weird vulgar dialog too. It begged me to question, “Did I just write that?” It’s those weird surprises that give you that weird sense that you have a full blown sailor living in your brain. Not to say that’s all, but it’s these weird moments that take you into the world you’re building, which makes it more exciting. I find I’m constantly surprising myself. Even just having THE GOD MACHINE in print and then coming to terms with the fact I wrote and drew it all astounds me. It shouldn’t, but there it is.

Having developed time travel technology, which album would you send back to yourself during grade/highschool?

Violator by Depeche Mode. Young 10 year old Chan would appreciate that album immensely to no end and it would start her earlier on her DM obsession. She had no idea who did “Enjoy the Silence” when she was young until her teens. This was a travesty.

You have a choice of gouging your eyes out or reading a specific book. What’s a book that would make you choose the first option?

The Twilight series. The biggest complaint (we all have) is that vampires do not sparkle or have immaculate lives. –AND lets not forget the bad writing (and i only know this through a sample of the “joyous” paragraphs posted online). It’s especially bad when she (the author) uses a lot of words and sentences to describe something basic to have the appearance of good writing and poetry. Example, she used several sentences to describe ‘a woman who is a waiter.’ The correct answer would have been one sentence with the word “waitress,” and perhaps describe what this waitress looked like, or something that indicated what this person was like to bring them alive instead of dwelling on how to explain her occupation.

Twilight has to be one of the worst ‘Mary Sue’ fan fiction-esque to ever make it.

After being selected out of a contest, which piece of American currency do you redesign and how do you change it? (include color, value amount, whose face is on it, etc.)

The 2 dollar bill. I’d put the Futurama Nixon in his bell jar on the front, mouthing “Arooo.” On the back of the bill would be Zap Brannigan signing Brannigan’s Law on the back of an irritated Kif.

If you were turned a Megaman Villain, what would your villain name be? (Naming convention: _____-man e.g. Magnet Man, Heat Man, Shadow Man) (bonus question: what would you name your weapon?)

CHAN MAN! With ART MAKER arm! I won’t be able to duck and I’d fall down holes due to my ART MAKER arm! So, really, I’d be a level 1 villain, that you could probably defeat instantly.

Bad Behavior has blocked 1173 access attempts in the last 7 days.