It’s official: Full Moon Features is releasing a third installment of their Evil Bong series. Not only that, but it’s going to be in 3D and Sniff-o-Rama! To promote the film’s upcoming release, Full Moon was kind enough to send me a preview disc containing the first 22 minutes of the movie in 2D (along with other goodies I’ll discuss later). As this is a DVD-R screener, please keep in mind that I have no idea if the finished product will turn out exactly the way I describe it here.

Although having not seen Evil Bong or Evil Bong 2: King Bong, I was looking forward to seeing what Evil Bong 3D: The Wrath of Bong had to offer. After all, director Charles Band is the guy who brought the world 3D cult favorites like Parasite and Metalstorm: The Destruction of Jared-Syn. Things start out promisingly enough with a cool-looking shot of a CGI pot meteor flying through space. It’s set up in a way that you can tell it will look impressive in 3D without blatantly telegraphing that the effect was intended to be 3D, as is the case with most 2D versions of a 3D movie. Come to think of it, some Dr. Tongue injokes and a cameo by Count Floyd would have been a great touch. The meteor crashes and is found by a man who was previously engaged in burying his murdered wife in a shallow grave (and a pretty shoddy one at that). Upon finding the meteor and witnessing it opening to reveal some kind of space bong, the man does what anyone in his position would do…dab his finger in the glowing moss on the meteor’s surface in order to have a taste and then run off with the bong in hopes of making some quick cash! His name is never given in the preview, but I’ve nicknamed him “Jordy” due to what happens later. After the titles (accompanied by a very appropriate reggae song) and a brief interlude with “Space Institute” employee investigating the crash site, “Jordy” makes his way to a head shop in order to haggle with its two clerks. As you’ve guessed by the title, the space bong eventually comes to life and has global domination on its mind…

Although seeing the previous two movies probably would have helped me understand and enjoy Evil Bong 3D: The Wrath of Bong more, the preview didn’t exactly make me want to rush out and see the rest of the movie. Why? The short version is that I’m afraid I’m just not the sort of person this movie is aimed at. Look at this promotional poster and decide for yourself if you’re the target audience: 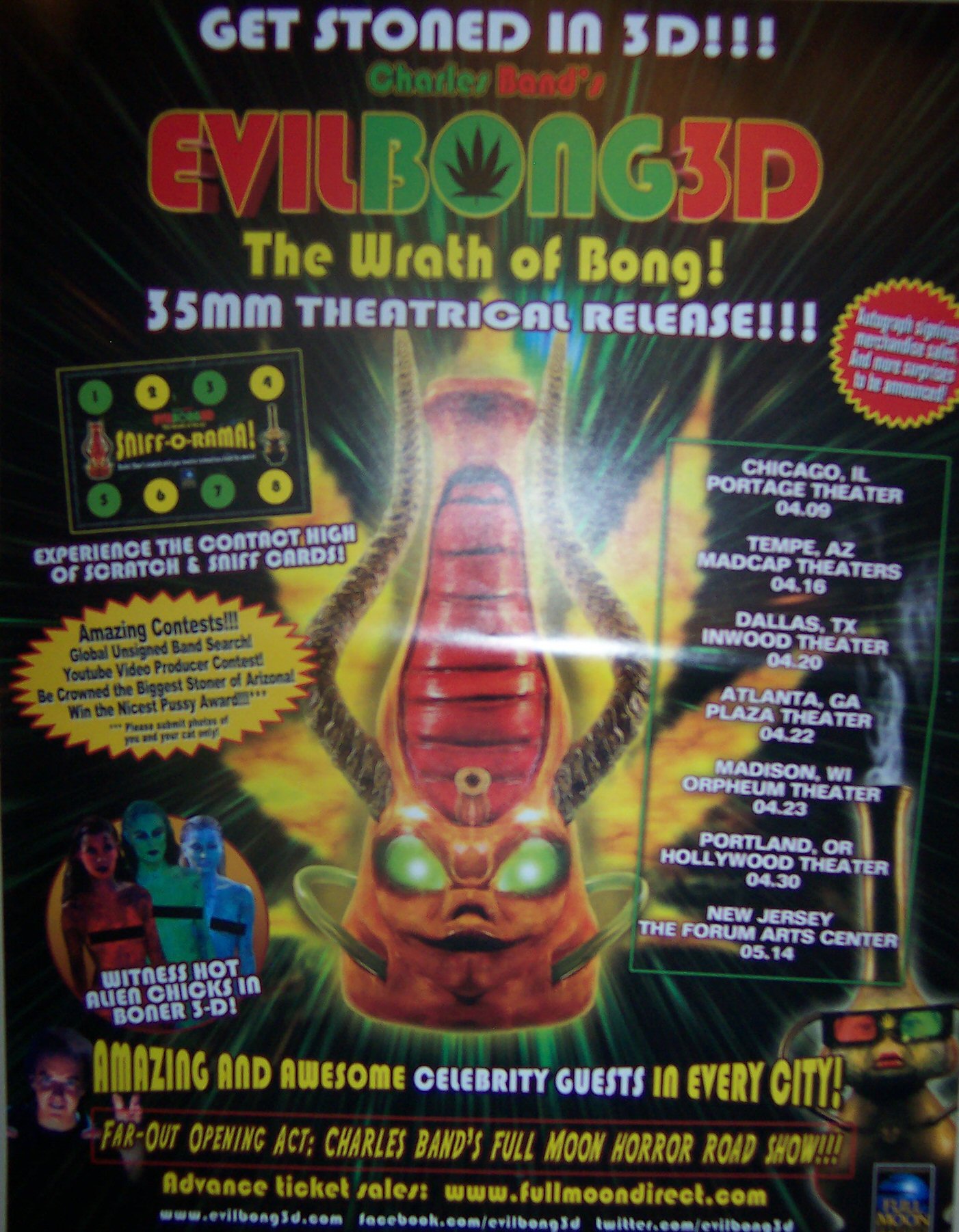 If that seems like your type of film, then by all means, please feel free to see it. Given that this is the second sequel to Evil Bong, it’s clear that there are plenty of people who go for this sort of thing. But I’m of the opinion that when a company known for low budget movies makes a comedy filled with the sorts of mistakes and bad acting you see in such films, it’s hard to tell how much is intentionally bad and how much isn’t. For example, it’s clearly nighttime when the meteor crashes, but the scenes involving its discoverer are in the daytime. If not for the faint tint applied to the “daytime” scene (which is only noticeable when compared to the Space Institute employee scenes), I’d assume that this was an intentional “error” thrown in as a joke. It seems to me that a lot of the budget went into making the 35mm prints and 3D processing, as the sets seen in the preview were very cheap. I’ll give the head shop an “A” for effort, but the “bong world” was just disappointing. A dark room and a few candles? Considering the two topless Na’vi/Mystique parodies inhabiting it, I’m surprised Full Moon didn’t film the Huangshan mountains that inspired the floating mountains of Pandora while they were in China to use as a background. What we do get certainly is a comedown from the sets seen in The Haunted Casino.

On the plus side, the A/V quality was absolutely perfect, which bodes well for its theatrical appearance. That’s right, it’s getting a limited theatrical release, which started on the 9th in Chicago. However, the TV spot on the disc plays up the 4/20/11 showing something fierce. The disc also provides a promo video for the Full Moon Horror Road Show, which is the opening act for each showing. Truth be told, I’d show up for a Evil Bong 3D: The Wrath of Bong screening just to attend the show if there were any screenings in my area. The entertaining promo starts with footage of TV news coverage of the event, then segues into a combination of clips from the show and clips from various Full Moon films. There’s also appearances by William Shatner and Phil Fondacaro, press and fan quotes and even a mouth-watering selection of merchandise. The disc also features an updated version of the video discussed in this classic article.

Although it’s too late to see the Chicago, IL screening at the Portage Theater, you can still attend these showings: