[As you may recall, we once got in touch with one Mr. Bertram Bertram, soliciting his expert opinion and analysis for our readers. As one of the foremost Haunt Experts around , we remain incredibly pleased to host his words here. He continues to educate us with his Alexandrian fascinating dive into the world of Haunts. We are once again honored to present his writing here at GdL16.]

I awoke this morning in an enthusiastic mood to continue my series of writings on the haunt industry. Walter, my manservant, presented me with an excellent breakfast in bed. The fine repast, accompanied by his superior coffee–black, no sugar of course–bolstered my resolve to venture to my writing desk and take up my pen.

While donning my Indian silk writing jacket though, I heard a deep groan echo throughout the corridors of the manor. Normally such an event would barely pique my interest, but the intonation was not issuing from the sub-basement as usual. Instead, it was clearly coming from above and had a distinctly architectural quality about it. I feared that the groaning was the result of pressure on the roof timbers from the massive amount of snow collected on the manor roof from various storms that have blown through the region lately.

I immediately sent Walter to the roof with a rope to secure himself, a shovel and instructions to not come down until he had cleared away all of the snow or until it was time to prepare brunch, whichever came first.  Hearing Walter scraping away at the shingles, I sat down again at my desk intending to apply all my faculties to the second installment of this article. Unfortunately, it seemed that fate was against me. Just as I was dipping my pen, I heard Walter cry out and saw his wizened figure swing past the study window.

Annoyed at the interruption, I threw open the sash to confront my manservant who was hanging just outside the study by the rope secured around his waist.  I instructed Walter, in no uncertain terms, to return directly to his task. I was not about to let my manservant’s poor equilibrium interfere with my work for you, my dear reader. Walter, however, claimed that he had not slipped off the roof, but had, in fact, been thrown.

He stated that after fastening the loose end of the rope around a chimney, he had shoveled his way down the pitch of the roof just to the edge. As he turned to climb back up, he felt a hand on his shoulder and was instantly propelled over the gutter. Only the rope prevented him from landing in the Japanese yews below.

I found his story preposterous of course. Suspecting it to be a childish attempt to avoid shoveling, I ventured downstairs and out onto the snow-covered south lawn to get a look at the roof and prove that Walter was, indeed, alone.

I could see my manservant still slightly swinging in front of the second floor windows. Following his anchor rope upward with my eyes, I found the narrow path he had cleared from the roof peak to the gutter.  By tracing the proximity of his working path to certain architectural elements of the roof, I deduced what had occurred.

Walter had shoveled his way down the slate in a straight line, but at the very edge, he had bumped one of the stone gargoyles that line the roof. Thus perturbed, the statue had ejected the interloper from the roof in the most expedient way possible, with a light push. All in all, Walter was quite lucky. I know that the manor gargoyles can become rather violent when disturbed.

Cupping my hands over my mouth I yelled up to the statue that I suspected was responsible for my manservant’s pendential predicament. The grotesque was unable to answer me verbally, of course, but utilizing a series of gestures, it indicated that my assumptions were accurate. I apologized on behalf of my attendant and explained that his labor was vitally important to the continued well being of the manor–as well as the fact that the brunch hour was quickly approaching.

The gargoyle expressed its understanding of my entreaty by hauling Walter back up to the roof. I was able to toss Walter’s dropped shovel just high enough for the statue to catch and return to him.

With my manservant clearing the roof under the watchful gaze of several of the stone guardians, I could finally return to the warm confines of my study and apply myself to this article which is the second of three on the subject of guest behavior at haunted attractions.

The first article in this series presented the basic rules of behavior common to all haunted attractions. In it, I discussed the first rule, “Do not touch anything”. Now, I will continue reviewing theses common guidelines with the second restriction, “Do not touch anyone.”

Do Not Touch Anyone

The next rule, to not touch anyone, is usually phrased as “Do Not Touch the Actors”. This directive matches closely with the first rule of “Do Not Touch Anything”. “Touch”, is best interpreted as euphemistic; the request to avoid physically engaging the actors has more to do with ill intentioned knuckles than wandering fingers. The real meaning of this rule is “Do Not Attack the Actors”.

One may think that such a rule should simply go without saying. Sadly, despite how many times it may be said or posted, haunt actors are routinely touched, poked, prodded, pushed, punched, jabbed, shoved and otherwise assaulted by patrons on a nightly basis. The gentle wording of the rule has less to do with etiquette, than it does to avoid inspiring violent notions in those minds best left in their pristine state–tabula rasa.

I recall an occasion when a particularly dedicated actor performed close to a group of teenage guests. The actor was delivering his lines in a rapid-fire manner when one of the young men spit directly into the actor’s open mouth then shoved quickly past him. The actor was livid, but the antagonistic guest made good his escape and was unable to be collared by security staff.

I could go on at length sharing story after story of actors who have been beset upon in sundry ways while performing at haunts, but for now I will constrain myself to just one more anecdote. This novel incident happened to a young performer of my acquaintance named Johnny. 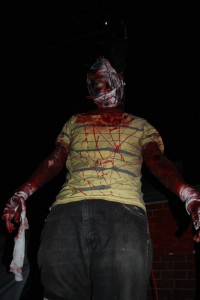 Johnny was portraying an original character seen here in the photo in a cage maze scene. As he explained to me, he climbed up the inside of the cage and, placing one foot on each of the facing walls, straddled the pathway thereby forcing patrons to crouch slightly as they walked beneath him. He periodically bent down to eye guests menacingly as they passed.

A young lady at the end of one group stopped just in front of Johnny and stared up for a moment, baring her teeth. She then lept upwards and bit into his inseam region. She dropped back down to the pathway and ran off. Johnny lost his footing in the shock of what had transpired. Barely retaining his grip on the wall he saved himself from a possibly injurious drop to the ground. Johnny finished this story in his youthful jargon saying, “She Pac-Manned my junk.”

If you are bewildered by what could account for such outrageous acts, please be patient. I will address the motivations behind such incivility momentarily. For now, let us finish with the final common rule of guest behavior.

Do Not Do Anything Dangerous

Haunted Attractions can have any number of unique scenes and means of transport for guests that require various oddly specific rules that I have gathered under the catch-all of “Do Nothing Dangerous”. These rules range from the mundane–“Remain Seated During the Hayride”–to the exotic–“Do Not Rile the Alligator”. Also included under this rule is the usual host of warnings to guests about the presence of strobe lights, fog machines, uneven floors, low ceilings and other such hazards endemic to haunts. A person who has any sort of sensitivity to such effects is expected to not place themselves in danger by entering the attraction.

Of course visitors routinely disregard these rules in all sorts of creatively irresponsible ways, but I am sure that you, my good reader, have already surmised that by now.

One may be forgiven for assuming, after studying these rules and the reasons for them, that patrons of haunts are a dim lot given to stupefyingly negligent acts of the most foolhardy nature. Of course there are a minority of particularly rowdy, often inebriated guests that are removed each night from haunts. But perfectly average, sober citizens are also prone to committing these behavioral lapses. The reason for this lies in the very nature of a haunted attraction, namely the immersive fantasy world that haunts create for their patrons.

The clock in the hall indicates that it is time for brunch so I will end my discourse here. I shall return soon with the third and final installment of this series in which I explore how haunted attractions inadvertently encourage patrons to act out against performers.