A Handful of Dirt: Nels Truesdell of Kava Kon

“That’s all still a fantasy now, of course, but where d’ya think all the great revolutions begin if not in fantasies?” 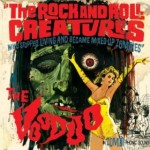 The inside photo of Neidi Night and Eerie Powers, posing in black leather beside a Yamaha 350, is the clear evidence that these two are throwbacks to a different time of outlaw attitudes and aesthetics. They’re made in the image of roadhouse rebels, the monsters of grindhouses during the period when the atomic threat of the fifties proved too goofy and the serial slashers of the eighties had yet to be king. Night and Powers, known as The Vooduo, are the creatures of an American period where mutation was too dangerous to be hip, when the derelicts and diseased were on the winning side.

Neidi plays drums while Eerie jams on his guitar and vocals. For their latest, they had a Dave Klien guesting on theremin and organ, noted on the opening song, “Zombie Baby.” Compared to their first album, The Vooduo have developed a depth and greater understanding of who they are. There’s no pretense or bullshit. THE ROCK AND ROLL CREATURES… is straight-up honest rock and roll.

Songs like “Groovy Ghoul,” “Shrunken Head” and “Hell on Wheels” hark back to the dirty and grimy times where there wasn’t a term for ‘grindhouse’ cinema, back before classification was beyond plausible so the blanket of ‘horror’ fell upon it all. The song “Blood Breast and Beast” celebrates this period, where you could find one (or in the case of breast, two) of each in every movie. The attitude of “Bone thru The Nose” shows that there are freaks and finks that will find that life is groovy when it’s dark and dirty.

Consider this: The Vooduo’s new album takes its name from a movie that, like many, we first and only know from its showing on Mystery Science Theater 3000. It’s hard to think there some people went to see ‘The Rock and Roll Creatures That Stopped Living and Became Mixed-Up Zombies’ in earnest, but they exist. We have documented proof, since one piece of concrete evidence of sincere watching is the recorded testimony from the wild mind of a venerable rabid rock critic, Lester Bangs. A good line from the running commentary goes:

“What about all the truly great movies comprised of unreconstituted trash, which are important not only because nothing else is deranged in quite the way they are, but also because they demonstrate that occasionally intersecting tastes don’t in any way prove the sharing of Good Taste cross twenty or thirty years?”

Like the movie, nothing else is deranged in quite the way The Vooduo are; other bands might bring in more members or bloat their sound with the day’s fashion. The two of them run a tight operation. These two aren’t of bad taste or trash, but of the Bad Taste back when it wasn’t hip or fashionable.  Not everyone is going to get them. That’s fine. There’s room for all in this world.

If you’re a fiend, a demon, a monster kid or just some Screamin’ Jay, you will already have this album. If you don’t, you know what you need to do.

“….Realize that the whole concept of Good Taste is concocted to keep people from having a good time, from reveling in a crassness that passeth all understanding.”

Bad Behavior has blocked 1660 access attempts in the last 7 days.