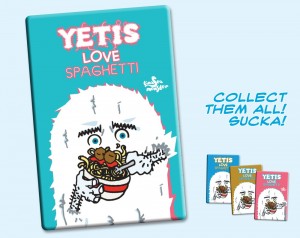 Of course, we here at the Local knew that the ‘rapture’ wasn’t going to come around. There’s too much work left to be done.

It might have meant a reprieve to those who are waterlogged and saturated by the flooded banks and the constant rain.

While we might be grateful for the rain when the threats of drought and water restrictions loom around the corners of the next few months, we’re ready for a break in the weather.

We’re also tired of Young Gus blasting that Creedence song whenever he drives up to the offices. At least the workers enjoy it.

We’re coming to a close to Zombie Awareness Month for 2011. Nemi has been around to distribute the invitations to her formal dinner/fundraiser. A few charitable doctors and humanitarians will attend but we’ll pass on that and attend the informal dinner/drinks at the end. We think that’s what the GdL16 members prefer. 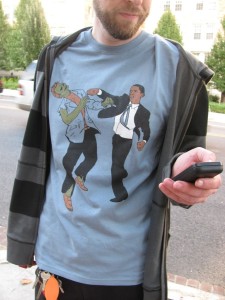 We have (probably) one last Tueday uEtsy with products to honor our undead compatriots. This week, we have Tina Seamonster. One of her more noted products features the current Commander in Chief straight up cold-clocking a zombie. Not one that the local office of Rights and Equality for Animated Persons, Nemi Lem, enjoys but if you want to have the current president of the USA not take any guff from a greenskinned flesh-eater on your body, this is the shirt for you. 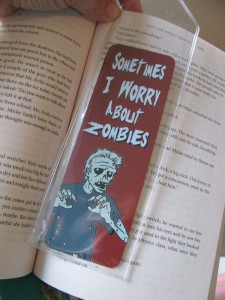 Sometimes I worry About Zombies Book mark with Sleeve

We’ve tried to keep it straight down the middle, not being too pro or anti zombie. We’ve got friends on both sides of the arguments. And both sides worry about zombies, sometimes. Sometimes, Nemi is worried they’re being mistreated and sometimes, Young Gus is worried that a zombie might be coming to ruin some of his work. So which position you take, this bookmark can represent you. 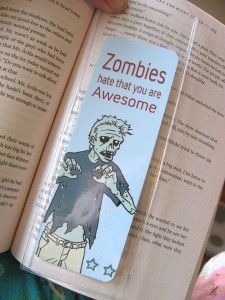 This isn’t really anti-zombie, per say. It might just be an accurate statement, that zombies are haters. Of course, as haters, haters gonna hate. So Zombies pretty much hate on you for being awesome, fast and smart. Zombies hate food that can out-think them. It’s very frustrating. 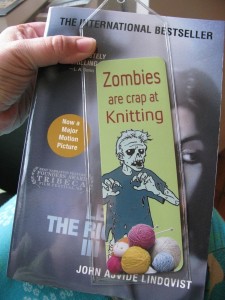 Zombies are Crap at Knitting Book mark in Sleeve

This is just a bit of a statement of truth than a dig at the undead. It’s not a coordination issue. We’ve seen many undead work on some machinery and rock a decent six-string. It’s just that Zombies don’t have that much patience to knit something of quality. They usually end half-way through so you either have one mitten or half-a-hat. Sorry, Zombies. 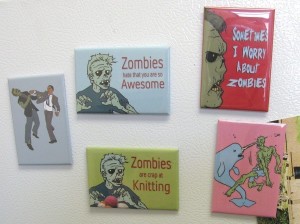 All Five Zombie Fridge Magnet Designs COLLECT THEM ALL

Of course,  you don’t need a book marker. Some people don’t use them, which is fine. But a nice magnet to hold a bill, a photograph or just to break up the monotony of your Whirlpool is always welcomed. You can get all five designs from Tina Seamonster’s collection, showcasing the President, Zombies and what looks to be a Narwhal. God bless you, Narwhal.

Find Tina Seamonster’s store here on Etsy. Purchase, play and come back next week for another Tuesday uEtsy.