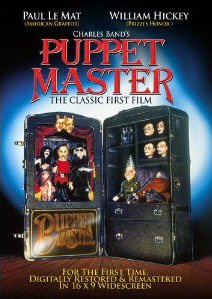 It’s very appropriate that I’m reviewing this movie now, as summer and Full Moon movies (especially the Puppet Master franchise) are very closely linked for me. Many days of the summer vacations of my youth were spent browsing the aisles at the (now-defunct) local West Coast Video with my younger brother and happily watching our selections while munching on pizza. At that particular store, Full Moon was king. Although they rarely put up promotional materials for major studio releases, posters for stuff like Subspecies and Robot Wars were displayed with pride. As you may have guessed, Full Moon titles did very well for them and as a result, they carried just about every Full Moon release. The amazing cover art depicting the killer puppets naturally caught our eyes and, after convincing our reluctant adult supervision that it would be okay for us to see Puppet Master 3 since the puppets were killing Nazis, our first official visit to the world of Full Moon had begun. Naturally, we wanted to see the first movie after having a blast watching the third and, despite the various continuity issues and change in Toulon actors, we still enjoyed it. So when I heard that Full Moon was reissuing a remastered version of the first film, I knew I just had to review it.

The year is 1939. Andre Toulon is putting the final touches on his latest creation in his room at the Bodega Bay Inn. Sadly, despite his best efforts to hide his living puppets from Nazi forces, his hiding place has been discovered. Trapped, Toulon hides his puppets in a hidden chamber in his room and takes his own life. Flash forward to the present day (well, 1989 or 1990), where a select group of psychics receive odd visions. After comparing notes, they realize they’re being called to visit an old acquaintance. But when they arrive where he’s staying (the Bodega Bay Inn), they’re surprised to find that their friend is married…and dead. But as the psychics try to piece together what’s going on, the previously walled-up puppets reappear to select their victims…

While this is the “first draft” of the Puppet Master franchise, it’s still very well done and is a great way to spend 84 minutes. There’s plenty of the sort of little touches I love which add to the characterization, such as the psychic who travels with her taxidermied dog or jabbing a corpse with a huge needle in order to see if it’s really dead. The psychic visions are handled in a way you can accept that people who can see the future would go to a place where they’ll be slaughtered. Speaking of which, I liked how each psychic has a different variant of power, such as psychometry, dream-based prophecies, etc. During my viewing of this, I was struck how Tunneler, Blade, Pinhead, Jester, Leech Woman (plus the later additions to the gang) would never work as a gang of human-sized killers. Killer puppets are the only way this script (and by extension, the entire series) could work. Besides, using a full-sized killer would eliminate the excellent scene involving Pinhead’s emergence from his hiding place in a coffin!

Being that this is the first Full Moon movie, they really gave the film the treatment it deserves. In addition to finally presenting the film in its originally intended widescreen aspect radio (it was supposed to get released in theaters, but became a direct-to-video release), Full Moon went back to the original negatives and made an all-new transfer. Said transfer is beautiful and, aside from a brief “blink and you’ll miss it” spot of print damage in beginning, the picture is as perfect as the sound quality. However, the film does not seem to include the expanded material shown in the 2007 3D DualDisc release of the film. This is presumably due to using the original (cut) negatives to ensure a high quality transfer, but it’s still rather disappointing. It’s a shame said material wasn’t included among the disc’s numerous special features.

Despite the lack of a chapter menu in the last two Full Moon discs I reviewed, I’m pleased to say that Puppet Master does not suffer from that issue. Our first “true” special feature is the “Charles Band Intro,” a trivia-filled introduction by Band that clocks in a little over five minutes. In it, we learn that the film was shot in 1989 and wasn’t released until 1990, how the film was influenced by Dolls and The Dungeonmaster, how Six Shooter was originally supposed to be in the film (as a ninja!) and how this DVD differs from the previous releases (among other cool details). Next is the original “No Strings Attached” making of featurette from the VHS release. This predecessor to “VideoZone” is not restored, but it’s still of good video quality. Clocking in at a little over seven minutes, this mix of interviews, film clips and behind-the-scenes footage gives a lot of insight as to how the puppets were brought to life (and why Band is so fascinated by little killers). I was actually surprised how much of this I had failed to remember. While I remembered that some scenes involving Pinhead used a real person’s hands acting as the puppet’s, I had completely forgotten that the person was a female “little person.” In addition to the the widescreen Puppet Master: Axis of Evil trailer, we also get a “Classic Full Moon Trailers” gallery, complete with a “Play All” option!The selection consists of Crash and Burn, Laserblast, Demonic Toys, Dollman, Meridian, Netherworld, Trancers 2, The Pit and the Pendulum, Shadowzone, Subspecies, Puppet Master, Puppet Master 2 and Puppet Master 3. The trailers are, as usual, a mixed bag. While most of them are the same as the ones used on the Oblivion DVD, the one for Trancers 2 is good, as is the trailer for The Pit and the Pendulum (aside for a brief video line). Although the terrible quality of the spoiler-filled Puppet Master trailer had me worried, I was relieved to see that the previews for the other two installments of the series were of decent quality. I was also amused how Leech Woman is referred to as “Ms. Leech” in the first preview, but her usual name is used in the other two.

So whether you want to relive some old memories from when you first became a fan of the Puppet Master series or even if you’re just starting out, you definitely need to pick up this DVD. Just make sure to grab some pizza before you pop it in. Trust me, it’s a great way to experience the film…

Bad Behavior has blocked 839 access attempts in the last 7 days.