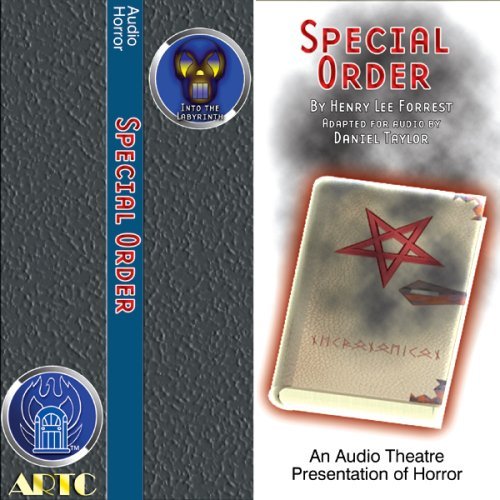 Those of you who read “Fear For Your Ears” will no doubt recognize the Atlanta Radio Theatre Company. Founded in 1984 by William L. Brown and Patrick Stansbury, they initially sponsored a one hour radio program on WGST 640. Thomas E. Fuller was soon recruited as a writer due to his background as a playwright and under his direction, the company eventually grew into a larger, more independent entity. Sadly, Mr. Fuller passed away in 2002, leaving behind a legacy of hard work, writing and directing. However, both his legacy and the Atlanta Radio Theatre Company still continue to this day. In honor of Mr. Fuller, I’ll be reviewing a 2006 review of a production that he directed called Special Order. According to the liner notes, the decision to adapt Henry Lee Forrest’s short story of the same name came in 1993, when Mr. Fuller was visiting an antique store and casually wondered what would happen if someone came in looking for the fabled Necronomicon.

Danielle can’t help but look back on the events that have so dramatically shaken her life. It all started when a strange-voiced man (who only identified himself as “Wilbur…Smith”) called the book store she works at to request a copy of the Necronomicon. Despite her best efforts to satisfy him by offering the many books using that title, the caller insists that he’s not looking for any of those ones…he wants the real Necronomicon. After failing to convince him that it’s a work of fiction, she begrudgingly agrees to put out a special order for it. Naturally, she’s shocked when a rare book dealer actually has a copy! But when the crate containing it arrives, strange things start occurring at the once-peaceful mall the book store is located. Her boss becomes obsessed with reading it and develops a strange rash, while mall visitors keep passing out with strange bite marks covering their bodies. Perhaps it has something to do with the ever-increasing amount of rats appearance on the mall grounds. In any case, Danielle knows that something bad is going on and it’s only going to get worse now that Wilbur is threatening to come to claim his book in person…

Being only about 33 minutes long, Special Order is joined on the disc by the short audio drama, A Case of Abuse, in order to bring the total running time to 45 minutes. This original tale, written by ARTC regular Ron. N. Butler, deals with a woman who has taken her son out of school and has locked them in their apartment. But why is she so emotionally unstable? And why does she forbid her son from watching a certain purple video tape? Okay, that last one might have given the game away, but there’s still a surprise in this. As for why someone would create a parody of the mauve moron in 2006, please keep in mind that the script was written in 1995. Aside from a few minor quibbles, the performances were all very good. Although I was initially amused by how Wilbur sounded like a pirate, a quick look at Lovecraft’s works revealed that this take on his accent wasn’t that far off the mark. Similarly, I originally felt that another character’s description of the Lovecraftian horrors unfolding in front of her seemed too calm and unnatural. However, I soon concluded that she was in a state of shock and the “unnatural” aspects of her description were just due to the author trying to replicate Lovecraft’s trademark purple prose. Only those who hate “adult pretending to be a child” voices will have any sort of problem with A Case of Abuse.

However, I doubt that any of the above will both most listeners. Instead, I imagine the story’s Christian take on the Mythos will be more of an issue for Lovecraft fans. Not because of any hatred of Christianity, mind you. Instead, it’s due to the fact that the horror of Lovecraft’s Cthulhu Mythos stories comes from how there isn’t a loving deity and that humanity is at the mercy of cosmic beings of unimaginable power whose motivations are utterly unfathomable to human minds. They aren’t evil per se, it’s just that they tend to hold humans in the same regard that we hold ants. While Forrest’s comment about “ultimate evil impli[ng] ultimate good” is thought-provoking, it doesn’t fall into the standard take on Lovecraft’s writings. But, in fairness, there have been some occasions where Lovecraft’s cosmic horrors have either been evil or willing to help humanity, so there is some wiggle room to shoehorn in a “good vs. evil” take on the Mythos. I regard the story (and its way of fitting the Judeo-Christian concept of God and angels into a Lovecraftian mold) in the same way I regard Brian Lumley’s The Burrowers Beneath: interesting, but not my preferred take on the Mythos. Hardcore Lovecraft fans might also take issue with the unique depiction of the Necronomicon (bound in human flesh, makes certain readers have allergic reactions and drains heat from the room its stored in) and its use of the old “Lovecraft was writing the truth” cliché. While this might not be an issue for casual fans, it’s extremely hilarious for those who know how much of his tales were due to his being inspired by other writers’ works. It should be noted that the cliché originally started with misperceptions about his idol Edgar Allen Poe’s works and eventually spun out of control. However, it seems to have jumped over to Lovecraft when interest in his stories grew. Don’t be surprised if we start hearing similar things about the work of Stephen King at some point in the future.

But don’t let the above comments fool you; I enjoyed listening to both audio dramas. I was amazed how the 45 minutes seemed to fly by, thanks to my being engrossed by the stories. I only brought up the points I did in order to to steer away those who might take issue with those aspects of the productions. Although this (and many other titles by the Atlanta Radio Theatre Company) are released on glass-mastered CDs, there is a chance that future issuings of it will be via digital download or on CD-R due to both high demand and changes in the organization’s inventory strategy. The liner notes are quite informative (and often amusing), so resist any temptation to skip reading them in order to get straight to the audio goodness.

The Atlanta Radio Theatre Company has more Lovecraftian audio goodness in the works. In addition to having recently completed the original tale The Dancer in the Dark, they are in the process of both wrapping up The Call of Cthulhu and starting The Colour Out of Space. Their other Lovecraft-related titles include:

Special thanks to the Atlanta Radio Theatre Company for the review copy!