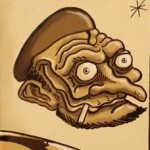 The artwork of Sam Gambino has appeared on multiple album covers and at event posters. His artwork captures the wild imagination of the golden age of horror, sci-fi and kustom kulture. Looking at his gallery is like listening to a bad-ass garage rock album with your eyes. Find his main site here.

Which wild animal would you want to have as a domesticated pet?
Julie Newmar, circa 1966.  That Catwoman suit fit her like a glove.

As an adult, what is your favorite Halloween costume that you saw someone else wear?
Phil Spector’s courtroom hair.

Was there ever a project that consumed your waking hours, almost possessing you until it was finished?
This happens quite often.  It’s called a Three Stooges marathon.

If you were to join the Coney Island Sideshow as a featured performer, what would you want as your talent?
I would be the bearded, tattoo-less man who is able to eat two coney dogs in one sitting while standing.

What is the strangest thing that ever happened to you at a Convention or specifically themed gathering?
I can’t recall anything happening at a Convention, but I was kicked out of a Sears and Roebuck once.

Bad Behavior has blocked 2133 access attempts in the last 7 days.