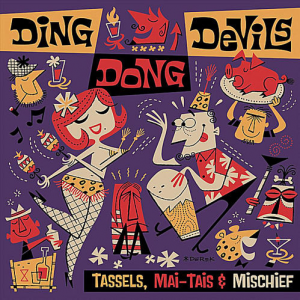 Based out of Los Angeles, the Ding Dong Devils are not your average exotica band. In addition to the obvious exotica and surf influences, the band also draws inspiration from “fuzzy 60’s garage rock, amped-up rockabilly, tremolo-laden surf, and even the greasy bump and grind music that was used to accompany burlesque performers.” Their seamless changing from style to style in each song seem just as playful as the band itself. Speaking of which, the Ding Dong Devils feature:

While Tassels, Mai-Tais & Mischief is their debut album, that’s not the only reason why it’s special. Guest musician Dave Klein was brought in to lend his expertise on keyboards, bongos and percussion while noted artist (and Tiki mug maestro) Derek Yaniger was tapped to provide the cover art. But what of the music itself? Let’s find out!

Things kick off with the jaunty steel guitar and bongos of “Ding Dong Devils Theme I.” It’s a short, humorous piece used to start up their shows. “Jungle Doctor” has a heavier sound with plenty of rockin’ guitars. Despite what the title might have you think, the song’s subject matter is not a witch doctor. Instead, it’s who you see out if you had two many Mai Tais or headhunters have you in a stew. I enjoyed the punchline at the end. “Rob Roy” opens with the sounds of bar chatter and we soon hear a man trying (but failing) to get the bartender to make the titular drink. The overall feel of the song is that you’re overhearing conversations in a bar as a band plays in the background. In “Ballad of a Taboo Image,” a wooden idol sings of being transplanted from an island tribe to Polynesian restaurant. As the catchy tune continues, we hear of the further trials and tribulations of the transplanted Tiki. If it wasn’t for the ending, I would swear this song was based on the story of a Tiki restaurant turned seafood joint in my neck of the woods. The instrumental (save for the spoken refrain) “Tassel Hassle” wonderfully uses a steel guitar to musically conjure up exactly the sort of thing the title implies. Although the name “Theme from ‘Belly Dancers of Bali Bali'” might make you think of a movie theme, this is a completely original composition by the band. That said, it would definitely make a great introduction to a film, as drums start things off and soon give way to both a reverbtastic steel guitar and a wild chant of the title by the band members.

The percussion and keyboards evoke a spooky feel in “Leopard Man,” as do varying vocals which describe the villainous subject of the song. In fact, the whole band gets in on the action when it comes to warning us of the Leopard Man, who seems more like a super villain than a member of the Leopard Society to me. “Sufferin’ Bastard,” a tribute to (and history of) the drink of the same name, has a rock feel. If you thought mummies would get a mention due to the drink’s origins in Cairo, you’re right! Soft percussion, guiros and a steel guitar set the mood for “Mai Tais in the Moonlight,” where a couple sing of a tasty Polynesian picnic in the moonlight, along with how each drink effects the woman. “I Carry a Tiki Torch For You,” in which a lovestruck singer demonstrates how not to pick up someone you fancy at a bar (Tiki or otherwise), has the feel of a subdued B-52’s song with a tropical touch. In sharp contrast, “Head Shrinker” is much darker, (well, as dark as the Devils can get) where drums and chanting back several people commenting on a shrunken head. I never thought roast pork would make a good multi-faceted metaphor for love, but the fast, rockabilly tune that is “(You Got Me) Stuck like a Luau Pig” showed me otherwise. Guiros (an exotica standard) make an appearance in “Tiki Boots” among the soft ‘n slow percussion and guitar work. The closing of Tiki bars and their subsequent replacement with more “mainstream” establishments is all too common these days. “False Idols Put a Curse on You” uses organ work, percussion and guitars to weave a tale of the terrible fate suffered by those who try to just that, something I imagine many a Tiki enthusiast secretly wishes for in their darkest moments. “Brontosaurus Stomp” is an excellent cover of the Piltdown Men’s classic ditty, in which drums filling in for the footfalls of a dancing dinosaur. Finally, “Ding Dong Devils Theme II” closes out the album (and this review) out with a continuation of the opening track.

My advice to hardcore Tiki enthusiasts is to think of the group as the musical equivalent of American-made “Polynesian” creations like crab rangoons and rumaki: not technically exotica in the strictest sense, but is still inspired by it (and still wonderful). Unlike the subject of my previous installment in the Freaky Tiki Surf-ari, Tassels, Mai-Tais & Mischief is a factory-pressed CD release. They “put the hula in your hula hoop” and “strum ukeleles until their fingers hurt”…they’re the Ding Dong Devils!

Bad Behavior has blocked 677 access attempts in the last 7 days.