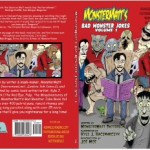 Having contributed to GdL16 in the past, we were pleasantly surprised to get word that Monstermatt Patterson’s first book, “Monstermatt’s Bad Monster Jokes Vol.1”, found a new publisher and will be released by Pill Hill Press on Septermber 21st.

Over 400 bad monster jokes, BAD MONSTER JOKES VOL.1 will be released with additional content than the first run. It’ll be a great addition to your 2011 Halloween preparation, in case you want to add a bad joke “trick” to your Halloween “treats.”  From the press release:

Monstermatt has written over one thousand bad monster jokes,and this first volume gives you a sizable introduction to the humor that resides within.The marriage of the jokes to Kyle Kaczmarczyk’s insightful illustrations,are what has fans waiting for more!

According to duo,the book is  acting as an introduction to the horror genre for newcomers, while entertaining those already familiar with it. Jokes and illustrations about Frankenstein and Dracula, to jokes about “The Manitou” and “Basket Case”, even “The Human Centipede”, are turning many a newcomer into a horror buff.

Word has it, for better or worse, that Volumes 2 and 3 of Monstermatt’s over 1,000 bad joke repertoire are being written. So you might as well buy as many copies of Vol.1 as you can to get your immune system up. Soon, Monstermatt’s jokes will be all over the world and you don’t want to be caught with your guard down.