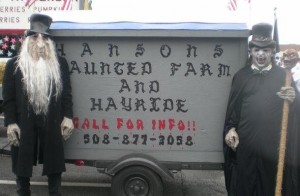 Although I wasn’t able to visit any haunted attractions last year, thankfully that is not the case this year.

When it comes to haunted attractions in Massachusetts, Middlesex County is desolate and Hanson’s Haunted Farm seems to he only “real” haunted attraction in the area. Seriously. After years of online research, the only other permanent haunted attraction in the area I was able to find was a yard haunt in Marlborough and I recently heard rumors of an elementary school in the area that allegedly does a haunted house, but could find no references to it online. Occasionally another haunt would show up, only to vanish the following year. Sadly, I always found out about said haunts the year they failed to return. My theory is that most of the people in that area have somehow failed to realize that Spooky World has long since moved away from Berlin, MA and feel it’s pointless to try to compete with them. In fact, I’ve found that this attitude towards any particularly successful business is quite prevalent throughout the area. In short, Hanson’s Farm is the only game in town.

Hanson’s Farm was founded in 1908 and is currently operated by the family’s 5th generation. While I do not know for sure how long they have been running haunted farm and hayride, I did overhear one of people in front of me commenting on how he had been visiting it for the past 10 years! I should also note how their founding date is referenced in the haunted hayride as an injoke (but I won’t spoil it by telling you how). If at all possible, you should pick up some of their fresh fruits and vegetables, as they’re delicious and usually much bigger than what you’d get at a supermarket. When you approach the farm, be sure to note that parking for the event is across from the farm itself. Although you might see a line in front of the haunted house, you have to buy tickets in the farm store (you’ll recognize it since all the lights are on). While there, be sure to keep an eye out for free goodies, like discount coupons for Party City (formerly iParty).

The haunted farm/house is actually an open-air maze of sorts made from wooden fences. The Hanson’s Farm crew very cleverly set it up so that you can’t see directly into the haunt while waiting in front of the entryway. They also have the first scare positioned in such a way that you can (usually) hear the screams of its victims not too long after they enter, which nicely builds suspense and anticipation amongst those waiting in line. Quite frankly, I’m surprised nobody took advantage of the haunt’s fence-based construction to get an extra scare by jumping up and screaming while customers passed by on the other side. There are plenty of clever scares here, with actors popping out right in front of you, waiting in unexpected areas, following you and even one who yells that he’s going to get you long before you meet up with him. While while waiting in line for the haunted hayride after completing the maze, I overheard him leading the entire haunt in singing the Freddy Krueger song. That must have been pretty freaky for every customer inside at the time. If your name is spoken while you wait in line, you’d better believe the monsters will make things personal. Very few of them do the old “pretend to be a dummy and later come to life trick,” although there are plenty of static dummies inside to help keep you guessing. There are also some still displays, such as a cannibal cookout and a skeleton in the gallows.

After exiting the haunt, you’re herded into a line for the haunted hayride. Colored lights provide an interesting atmosphere and you can occasionally see actors leaving the haunt after their shift ends (or even venturing out into the area the hayride is held in). One actor in particular, a scary-looking gentleman in a beat-up trenchcoat and fedora, made sure to wander close by the hay wagon to spook people before departing. The two wagons used in the hayride utilize a cage-style wagon like the one seen here rather than the usual wooden wagon I’m used to. That said, I was pleasantly surprised to find that this did not cause any major visibility problems when it came to the scares. Speaking of which, I think you’ll have the best experience by sitting on the left side of the wagon, possibly towards the end. A lot of the scares and scenes seemed to favor that side, although the hayride was designed to try and offer a much of the same scares on both sides as possible. That said, the position I was in (toward the center on the right side) had its perks and I was able to freely look around to take in as much of the scares as I could. While much of the area is wide open fields, the Hanson family has used several tricks to cover for that fact. In addition to the various buildings (both regular farm stuff and setups built for the haunted hayride) dotting the landscape, some scenes are hidden in darkness until hidden lights turn on. That said, there are a couple of times where you can see lighted areas ahead, along with light from neighboring houses, but I didn’t find it to be too much of an issue. It wouldn’t surprise me if, in the future, they try blocking the houses and the distant upcoming scenes out of view with larges scarecrows and the like. There’s only a scant few parts where monsters jump out of nowhere, everything else involves a scene of some kind, like a cemetery and spooky shack. And when they do leap out at the wagon, they go the extra mile and constantly attack it with weapons! There were a few areas that would have benefited from having some monsters jump out at you, such as the “Egor” section that had things like a giant pumpkin with a hole in it and an idling car, but nothing happened while we went through it! Speaking of going the extra mile, I was shocked that numerous scenes used real flames! There were some seemingly unintentional surprises too, like the giant puddle we had to drive through, in addition to the huge bump that nearly threw the girl next to me out the door! The ending featured a great return to some aspects of earlier scenes in the hayride, along with adding some new material. On the way out, don’t forget to check out the volunteer sign-up sheet on a table to the left. If it wasn’t for transportation and scheduling issues, I definitely would have signed up.

As you can imagine from that last sentence, the haunt has a large volunteer staff, which might explain why some of the creatures (especially toward the end of the hayride) were of the “person in regular clothes wearing a mask” variety. While I understand the difficulty in having enough costumes that can fit a variety of shapes and sizes, it would have been preferable if the monsters wore hooded robes or all black. While street clothes can work on a chainsaw maniac or a zombie, it doesn’t work for all characters. Similarly, gloves are a must for most characters. If you’re trying to convince me you’re a stuffed dummy instead of an actor, showing your bare hands makes it a bit hard to swallow. While in the maze, I also caught a few actors not wearing their masks, which is a big no-no. Thankfully, there were very few props that didn’t compare up with rest of the ones used in the haunt and, overall, both haunts were fantastic.

Despite its little-to-no competition, Hanson’s Haunted Farm and Hayride has not rested on its laurels and phoned in its haunted attractions. Given how the cost works out to about $7 per attraction for adults, it’s a great deal and you’ll definitely get your money’s worth. I understand that in both haunts, some scenes change and others are retained for the next year, which means you’ll never experience them the exact same way when you visit in future years. So if you’re in the area, make sure to visit!

Final verdict: 4 skulls out of 5 (for the total experience)

UPDATE: Hanson’s Farm now has two alternate websites online. Also, the yard haunt mentioned above has become a full-fledged haunted attraction, so be sure to visit both attractions if you get the chance. You won’t regret it!

Special thanks to Hanson’s Farm for the use of the image!