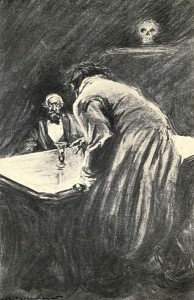 What better way to get into the Halloween season than by reading scary stories? Our first selection is Robert Louis Stevenson’s classic Strange Case of Dr Jekyll and Mr Hyde (which is the source of the above image). He also wrote “The Body Snatcher,” which was later adapted into the classic Val Lewton movie of the same name.

What is the the strange secret of “The Room in the Tower” by E.F. Benson?

Although better known for The Lost World and his Sherlock Holmes stories, Arthur Conan Doyle was no slouch in the horror department. “The Horror of the Heights,” “The Terror of Blue John Gap” and “Lot No. 249” are great examples of this.

Montague Rhodes James, often known simply as “M.R. James,” is considered to be the master of ghost stories in Britain. After reading “Oh Whistle, and I’ll Come to You My Lad” and “Count Magnus,” I think you’ll agree.

William Mudford’s “The Iron Shroud” (aka “Italian Revenge”) is an interesting tale of torture that supposedly influenced Edgar Allan Poe’s “The Pit and the Pendulum.” Wikipedia also notes that it was a major part of an old Popular Mechanics article about torture chambers!

Similarly, “The Air Serpent” by Will A. Page was referenced in an issue of Eerie as an example of real folklore!

Wardon Allan Curtis’ “The Monster of Lake LaMetrie” is a bizarre tale involving a brain transplant and an Elasmosaurus! If you ever read The League of Extraordinary Gentleman and wondered what all the references to a talking lake monster were about, then you definitely need to read this.

“In Kropfsberg Keep” by Ralph Adams Cram is one of my favorite ghost stories, which is about two young thrill-seekers in Germany who spend the night in a haunted castle in the hopes of seeing the hanging ghost of the deceased owner.

“The Haunters and the Haunted” (aka “The House and the Brain”) is notable both due to its author, Baron Edward Bulwer-Lytton (who coined the phrase “It was a dark and stormy night”), and because it has one of the most bizarre endings in the history of horror literature.

Fans of H.P. Lovecraft will no doubt be interested in Elizabeth Bear’s “Shoggoths in Bloom.” Interestingly enough, it won the 2009 Hugo Award for Best Novelette.

The Invisible Man isn’t the only invisible character in the world of horror. Guy de Maupassant’s “The Horla” and Ambrose Bierce’s “The Damned Thing” both deal with monsters that can’t be seen with the naked eye. What adds to the creepy factor of “The Horla” is that it was written while its author’s mental state was suffering due to his contracting syphilis.

Although better known for his musical and artistic work with Nox Arcana, Joseph Vargo is also a talented author. The Amazon preview for The Legend of Darklore Manor and Other Tales of Terror (a tie-in with the album of the same name) features two stories, “The Coroner” and “Black Heart.” Although the first one was co-written with Joseph Iorillo, the second story is pure Vargo.

Back before he wrote Under The Dome, Stephen King was toying with the idea of trapped people in an unpublished story called “The Cannibals.” In order to help promote the release of Under The Dome, he released his original attempt at the story online.

For more tales of terror, check out these classic Gravedigger’s Local 16 articles:

Storytime!
Tales of Cthulhu
A Study In Emerald
Have I got a story for you…