Full Moon has seen fit to release ten titles from Charles Band’s early days: Auditions, The Best of Sex and Violence, Dreamaniac, Famous T&A, Filmgore, Mutant Hunt, Necropolis, Savage Island, White Slave and Zombiethon. The reason why this collection of both theatrical and direct-to-video release is labeled “Grindhouse” will be revealed later, but first here’s a look at three of the films: 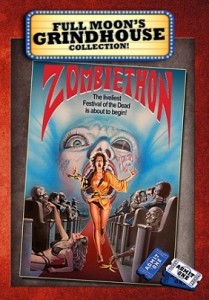 Zombiethon is a collection of clips from Zombie, Zombie Lake, Oasis of the Zombies, Fear, The Invisible Dead, A Virgin Among The Living Dead and The Astro-Zombies interspersed with original sequences featuring zombies chasing people into a zombie-filled theater playing the clips. The back cover mentions White Zombie, but no clips from that are present in this (or the original VHS version). The seemingly unrestored VHS quality transfer admittedly does help capture the “Grindhouse” look of the films, although the fulscreen transfer doesn’t. There’s some print damage and the occasional shifting colors, but it’s definitely watchable. While it mostly shows condensed “only the best parts” (and thus chock-full of spoilers) versions of the films (reminding this reviewer of 8mm releases by both Castle and Ken films), there is one point where only a single lengthy clip from A Virgin Among The Living Dead (aka Christine, Princess of Eroticism) is shown. I think that’s for the best, as the film does start to drag by that point and the film in question is easily the worst zombie film I’ve ever seen.

The original zombie effects, created by Joe Reader and Dr. David Lady, are neat-looking and appropriately match the film’s somewhat comedic tone. I particularly liked the armored cyborg zombie. Zombiethon does cheat at times, as Fear (aka Murder Syndrome) only has a single shot of a zombie and The Invisible Dead (aka Dr. Orloff’s Invisible Monster) doesn’t actually feature any zombies, only an invisible gorilla! Otherwise, Zombiethon is a fun way to spend a little over an hour. 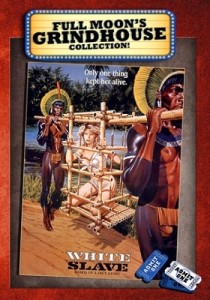 White Slave claims to be based on a true story, but, given my inability to find any information about Catherine Miles and the story and screenplay credit, I find that claim very suspect. In any case, the film is about the ordeals Catherine Miles had to go through in a South American headhunter village after her parents were brutally murdered during a family boat trip. Stripped and humiliated by the tribe, Catherine has to endure graphic slaughter, (unsimulated) animal fights, attempted rape and wars with a rival tribe of cannibals all while trying to escape. The fullscreen transfer has plenty of print damage and video glitches over its roughly hour and a half runtime, along and a few audio issues but it’s honestly not the worst transfer I’ve ever seen. Although no cannibalism is shown, the film is clearly trying to ape everything included in the likes of Cannibal Holocaust and Cannibal Ferox, right down to the nudity and use of stock footage. Presumably this is why it is known as Cannibal Holocaust II in some markets. Speaking of which, there are some moments where the color appears to be incredibly faded, which I suspect is due to the age of the stock footage used. While not as gory as others in the genre, the gore scenes are fairly over the top and is only fairly fakey. Sleaze enthusiasts should enjoy this one. 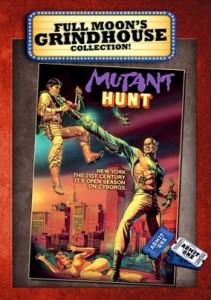 In Mutant Hunt, the evil owner of a corporation uses serum to make cyborgs into violent killers. How are cyborgs mutants? Well, it turns out the serum causes deformities and…well, that’s the best explanation we’re going to get. In any case, the cyborgs get loose and go on a rampage, all while the sister of their creator has to avoid capture and find the one man who can stop them: Matt Riker, mercenary. Mutant Hunt is a must-see for all fans of cheesy 80’s films. This one has it all, hilarious “futuristic” clothing, martial arts brawls, bad (but cool) special effects, goofy music and casual references to things like the “space shuttle sex murders!” What’s not to love? The fullscreen VHS quality transfer has only minor print damage and is the least problematic transfer when compared to the other two films. In short, it’s 73 minutes of unintentional comedy gold.

That said, the print of the film MGM uses for cable and VOD showings is far superior to this. I have also heard rumblings of a similarly improved Zombiethon print from MGM! What gives? Interestingly enough, White Slave is available on DVD from both Bloody Earth Films and Media Blasters (under the name Amazonia: The Catherine Miles Story). I can’t comment on the quality of those transfers, though.

All the films have chapter stops, but no chapter selection menu. The extras are all the same on each disc, many of which are exactly the same as the ones found on Killer Eye: Halloween Haunt. There’s the ad for hauntedcasinos.com, along with the “Grindhouse Promo” and trailers for Killer Eye: Halloween Haunt, Evil Bong 3: The Wrath of Bong, The Gingerdead Man 3: Saturday Night Cleaver, Killjoy 3, Puppet Master: Axis of Evil and Skull Heads.

The only new extra is the “Charles Band Grindhouse Intro,” an informative eight minute discussion of the origin of the Grindhouse name (Band says it fits the grittier 70’s/80’s films, but I also think it’s a handy way of explaining the less-than-stellar A/V quality), the origins of the compilation films and provides some details on the filming of Savage Island It’s great quality and widescreen, and there’s not much else to say.

Of the three, I enjoyed Zombiethon and Mutant Hunt the most. It’ll be very interesting to see whether or not we’ll be seeing more of the Full Moon Grindhouse Collection.

Bad Behavior has blocked 1023 access attempts in the last 7 days.