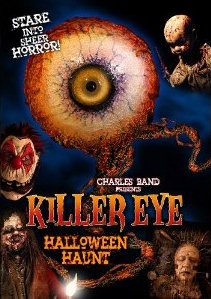 It was supposed to be a night of spooky fun. Jenna had invited her friends over to help set up her family’s annual haunted house and watch movies. But a combination of occult forces from her mother’s working crystal ball and some of her pals dancing suggestively in front of said ball have somehow brought one of the haunt’s props, a replica of the titular character from Full Moon’s The Killer Eye, to life. Now the girls are hunted down one by one, with the eye alternately attempting to impregnate or kill them. Can they resist the living movie monster or is the planet doomed to be a real horror flick?

I must admit, I was very surprised to see The Killer Eye get a sequel. As far as I’m concerned, it was an embarrassingly cheap movie from the time when Full Moon was suffering from serious financial woes that (in my experience) was best known by many for how the box art recycled themes from the Wizard Video release of Headless Eyes. Truth be told, I suspect that the sequel was made to take advantage of the Eye’s power to mind control/arouse women into removing their clothes, given how the cast is made of entirely of beautiful women and there’s wall-to-wall nudity. I found it interesting how the Killer Eye prop looked more realistic before it came to life. In all fairness though, the living eye prop from this film was light years ahead of the one used in the original (which can be seen countless times due to use of clips from the original playing on a TV). While several spooky haunted house props feature prominently on the cover art, they were thankfully not brought to the life in the film itself. The film also has tons of blatant injokes and plugs for Full Moon films, like the characters discussing Evil Bong and characters donning masks of Killjoy and the Gingerdead Man! That all said, it’s definitely a better movie than the original.

Full Moon’s DVD presents the film in a beautiful widescreen transfer, aside from the occasionally shimmering in the background at times. The audio is clear and while there are chapter stops, there is sadly no chapter selection menu. This could be a player issue, but I found that hitting “Root Menu” on my remote did not work properly at any point on the DVD. As the film is just barely over an hour long, Full Moon has seen fit to cram in a big selection of extras. In addition to the ad for hauntedcasinos.com at the beginning, there’s the Grindhouse Promo Trailer, Far Out Youtube Videos and Full Moon trailers. The Grindhouse Promo is a roughly three minute trailer for Full Moon’s Grindhouse Collection, which features ten films from Charles Band’s past. The fullscreen clips are all windowboxed and are of old VHS quality. I found it interesting how, in addition to pointing out when celebrities appeared in the films (usually prior to “making it”), they saw fit to put black bars over the nude scenes. Given that this was not the case in the releases themselves (and not the case in the main feature), it seems like an odd decision.

The “Far Out Youtube Videos” consist of A Cult Influence, My Super Ex Grudge, The Raven and Roid Rage. The first film packs tons of information (along with cool artwork and film clips) into its just under 10 minute running time. The mini-documentary’s narrator analyzes just what makes a film a cult film by interviewing everyone from the owners of places like the Hyaena Gallery and Eddie Brant’s Saturday Matinee, but also people involved in the cult film business. Although shot on video, the quality is very nice (save for a few instances). Sadly, the film is obviously cropped to appear widescreen.

My Super Ex Grudge is a hilarious parody of Ju-on: The Grudge wherein a man pays the price for dumping Kayako. It packs a lot into its five minute runtime, including a must-see end credit sequence and references to various female horror icons. It’s also SOV, but not obnoxiously so. The Raven and Roid Rage are fairly quick trailers for two upcoming films, with the amazingly awesome ad for the story of a killer hemarroid being my favorite of the two.

The trailers are for Killer Eye: Halloween Haunt, Evil Bong 3: The Wrath of Bong, The Gingerdead Man 3: Saturday Night Cleaver, Killjoy 3, Puppet Master: Axis of Evil and Skull Heads. All of said trailers are widescreen and of good quality. Interestingly enough, the trailer for the main program seems to indicate that the killer eye is from the 8th dimension (as was the case in the original film), rather than some mystical force imitating the movie monster.

I’ve felt for some time that Full Moon has switched its target audience from older movie fans to a younger male demographic and this film has confirmed that to me. The overt references to smoking weed and the female nudity that make up most of the plot made this very clear to me. Don’t get me wrong, Full Moon does still support other viewers, it just seems to me that they’ve change. One last thought: When you get right down to it, it’s simply ridiculous that an eyeball-looking creature would be sexually attracted to human women. It’s like a human being going to another dimension and wanting to impregnate some Lovecraftian monstrosity with little human beings for eyes.