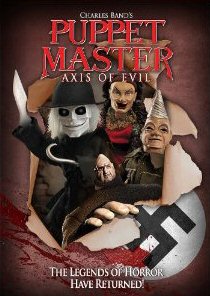 Flashing back to the beginning of the original Puppet Master, we see two Nazis enter the Bodega Bay Inn in 1939. Their mission? To capture Andre Toulon in order to obtain his method of bringing puppets to life. Toulon manages to foil them by taking his own life and hiding his puppets. However, said puppets are discovered by the owner’s injured nephew and he ends up running into the Nazis again. You see, said Nazis are meeting up with some Japanese contacts hiding in Chinatown in order to destroy a nearby manufacturing plant and one of them is posing as an American worker at said plant (where Danny’s girlfriend works). After discovering the secret of bringing the puppets to life, Danny’s attempt at monitoring the Axis forces accidentally results in the Nazis learning of Toulon’s creations. After killing his family and kidnapping his girlfriend to lure him out, Danny prepares for the fight of his life. Although not eligible for military service, he does have command of one of the most lethal armies around: Blade, Tunneler and the rest of Toulon’s creations.

After the poorly-received Puppet Master: The Legacy and (the apparently non-canon) Puppet Master vs. Demonic Toys, Full Moon was clearly trying to recreate what made Puppet Master III such a hit. David DeCoteau was tapped to direct, the film was set during World War II and a new puppet was going to be introduced. Sadly, the resulting film is only of interest to the most diehard of diehard fans of the series and has an infuriating Pirates of the Caribbean II-style non-ending. I wanted to love this movie, I really did. But sadly, the end product made that impossible.

Why? Well, besides the terrible acting there’s the cheap sets, (mostly) terrible puppet effects and awful writing. For example, how can Danny immediately find a secret hiding place the Nazis were unaware of and why doesn’t he revive all of the puppets he finds? Oh, and his choice of puppet when he needs to do a little surveillance/attack mission? Jester. Although I’m a fan of that character, it should be obvious that he rarely does anything combat-related and is the wrong choice for the job. Then again, considering that Danny immediately deduced a puppet was alive when it moved (rather than assume it’s a vintage automaton), I probably shouldn’t expect intelligent decisions from him. I also found it hilarious that a leech that’s been chewed up can instantly kill someone. Aside for few shots of Blade that live up to standard set by the original series, most of the puppets seem a bit “off.” I know the series will never be quite the same without David Allen, but come on! The new puppet, Ninja, is pretty bland for the most part and, in my opinion, looks like he’s made from Crayola Model Magic. While the attempt to tie the film with the events of the first is pretty cool, the film stock doesn’t quite match and I foresee more continuity errors being spawned as a result of this.

While the audio was fine, there were some visual issues with the widescreen transfer that may or may not be due to the player I was using. Most of the scenes had a subdued color scheme and seemed a bit saturated at times. It was jarring to see the traditional glowing green fluid that animates the puppets appearing as a dull yellow (although it looked normal in the trailers shown on other Full Moon DVDs I’ve reviewed). While the image was clear, it often made certain flaws worse. I really shouldn’t be able to point out the uneven globs of makeup on a character’s face or count all the fold marks on a flag decorating a wall.

Thankfully, there’s a nice selection of extras. First is “The Making of Evil,” a collection of 13 videos showing the film being made in China. Originally shown on Youtube, these informative videos clock in at well over an hour in total. That said, I prefer the similar videos showcased in Killjoy 3. Next is “No Strings Attached,” the behind-the-scenes featurette from the original release of Puppet Master. For a more in-depth look at this segment, please see my review of the first movie. Finally, there’s trailers for every canon installment of the franchise, which makes the lack of similar extras on the Subspecies Blu-Ray even more puzzling. I should note that, according to this, the special features are “not 1080i resolution, but 480p” resolution.

So, unless you’re planning on a Mystery Science Theater 3000-style commentary session with friends or are a series completist, I advise you to stick with the classic Puppet Master films. If you absolutely must own it, then I recommend the release that bundles it with the first film, along with some other goodies. Here’s hoping that any future installments will be a major improvement.