If ever I am to find a wife, have a kid and somehow raise them right that they make it to college, one of the fist bits of passing advice I will provide is that “hot sauce makes most bland shit palatable.” It’s true. During the tenure of tortilla trips and microwaved ramen noodles, the application of the concoction made life a little bit more interesting. When living in my first apartment and I needed to make a batch of Kraft mac & cheese, a few shakes made it seems for a moment that I wasn’t eating highly processed wheat detritus.

I didn’t grow up in a highly cultured environment, menu wise. That was not a fault of the family, mind you. Simply put, the backwoods of where I developed didn’t have a wide cuisine available.  A google search showed that only recently did an Indian restaurant open up in a neighboring town. It didn’t help that the Strange household wasn’t that rich. Iceberg lettuce and Chef Boyardee was more of an economic choice than one of taste. After relocating to the backwoods from the desert, we carried over a love of broke-southwest cooking so hotsauce became a staple. The poison of choice was Arizona Gunslinger for the longest time, though the Father Strange has, as of last switched over to Two Flaming Arrows. And now, I think I’ll make the transition over to one of Haunted Hotsauce’s trademark products. 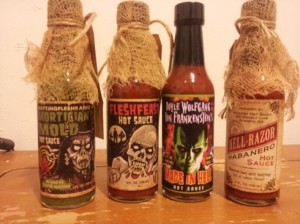 I have to say that on presentation alone, Haunted Hotsauce has earned my business. When I retrieved the package from the local Post Office, I was treated to the above selection of four sauces, a roll of parchment with a special proclamation, some eyeball bubblegum and other delights in the packaging that made me smile. And I didn’t order the advance packaging, which comes in a handmade wooden casket (with includes mausoleum moss and maggots!)

I ordered a bottle of Mortician’s Mold and Fleshfeast 1, since they’re towards the lower end of the heat scale. I’m not someone who looks to eat the hottest stuff alive in suicide-by-food attempts with shit that is on parr with pepper spray. Seriously, I don’t understand why people keep breeding these insanity peppers, especially since the latest round of ‘hot peppers that kill’ have come from lily white Europeans. I’m comfortable with myself that I don’t need to inflict neurological damage when trying to eat a taco. Dummkopf.

The Undertaker, probably looking for a new client, included a bottle of Doyle’s Made In Hell and what I can only assume is a lifetime’s supply of Hell Razor, the hottest product available on HauntedHotsauce.com. A hearty thanks goes out for these two bottles, though at this point I haven’t opened them because I had no milk in the home. Once procuring a couple gallons or so, I will crack the bottle open on them and follow up this review. If I knock up the aforementioned hypothetical wife with that hypothetical child, I don’t have a bottle of champagne (‘popping corks,’ indeed) but I do have these bottles of hotsauce for a special occasion. Until then, Doyle Von Frankenstein continues to stare at me, daring me. 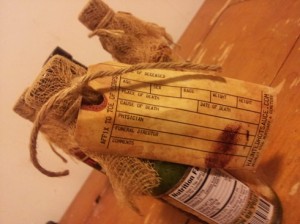 Each of the products from Haunted Hotsauce, save the Doyle sauce, came with a toe-tag and a death shroud. It’s a lovely touch that, even if you don’t opt for the handmade coffin, makes each bottle a gift and an experience. Plus, when you’re opening up a new bottle for the first time, it’s kind of cool to think that you’re getting closer to death. Or, it’s terribly frightening. Either or. 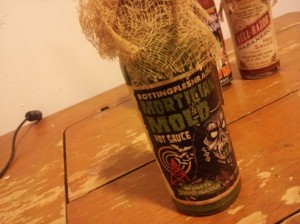 The least hot item available is RottingFleshRadio.com’s Mortician’s Mold, which is pretty misleading since the damn sauce carries a kick to it. This isn’t weak, but it won’t kill you immediately.

Take a look at this picture: 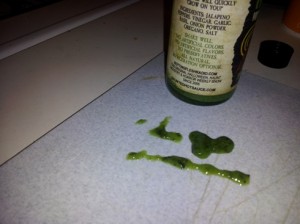 This stuff is GREEN and it’s not due to some artificial coloring and flavors. ALL NATURAL INGREDIENTS so this is pure damn green hell here. Now, if you can see those bits of darker spots? Flavor. You can tell with all the sauces, even just by looking at them through the bottle, that this is some quality food product full of robust flavor. I’m not bullshitting you.

See, when running out of some decent hot sauce, I’ve relied a lot on Texas Pete’s pepper sauce. Pepper Sauce, much like Tabasco, is vinegar with flavor. A lot of cheap-ass brands of ‘hot sauce’ list Tabasco as an ingredient. That’s kind of an indicator that someone skipped out on the quality. Not so with the Haunted Hotsauce. The Mortician’s Mold is a full flavored sauce. Very tasty. It’s not just jalapeno, as I could taste the garlic and onion. It’s a good blend and has some magical powers. No fooling – I screwed up some chili by adding more meat than expected, creating a sloggy stew. Some dash of the Mortician’s Mold brought that meal back from the dead.

Flavor over fire, any day. 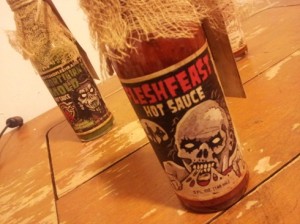 The original sauce that sprung the whole business, Fleshfeast, is cayenne based whereas Mortician’s Mold is jalapeno. The taste is different, of course, but the effect is similar – a robust flavor that has a strong kick that doesn’t overwhelm. There are two higher levels – Fleshfeast 2 and Fleshfeast 3 – that are higher in the heat index. But the basic level here that I tasted was strong enough to smart. But there wasn’t a bad aftertaste by those who rely heavily on vinegar or have a bad mix of ingredients. This was a tasty sauce, great for everyday use. I’ve busted it out on popcorn and the thickness of the sauce makes it look like the snack is splattered in blood. Very appropriate and delicious.

This is my new go-to hotsauce. It’s a great mix of flavor and heat that make life much better.

Head over to HauntedHotsauce.com and pick up a couple bottles for yourself. It’s a not a huge conglomerate but a very small business that I’m happy to support. If you’re throwing a party, these are great condiments to have and double-so if you’re a horror fiend. Do it. You won’t regret it.

Thanks goes out again for the additional review bottles of Doyle’s Made In Hell and Hell Razor. Look for a comprehensive review of the two later sauces probably sometime around Monday, February 27th. That’s if, y’know, I’m still alive by then.