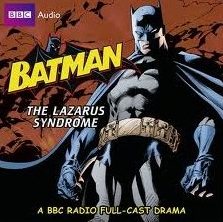 [Author’s note: This was originally supposed to be part of a review series focusing on superheroes and their connections various aspects of death and horror. Sadly, things did not go according to plan and all but this release fell through.]

Death is a major part of the Batman mythos. In addition to the character being inspired by an “old dark house” film featuring a killer in a bat-like outfit in real life, the death of his parents created him and fuels him to this day in the comic books. Let’s not forget that several of his sidekicks have either died, seemingly died or had at least one parent die. As is often the case with superheroes, the writing staff could not resist the temptation to (seemingly) kill Batman off. While I imagine that it made for a good sales gimmick at times, a lot of the time used the hero’s “death” was used to explore its effects on various characters in both Gotham City and/or the DC universe. In addition to the comic books’ “Going Sane” and “Batman RIP” storylines, the subject has also been explored in an episode of Batman: The Animated Series, a line of trading cards and even an installment of Batman’s decades-long audio career.

Rumors are sweeping Gotham City that Batman is dead after an explosion in Crime Alley. While Commissioner Gordon tries to reassure the populace that everything is under control, he gets an audio cassette that has a message from Batman. According to the tape, Gordon would only be receiving it if Batman dies and reveals his secret identity! But when he heads over to Wayne Manor to investigate, he is shocked to see that Bruce Wayne is alive and has no idea about any sort of tape! Things get worse in private, as Wayne coldly announces his plans to both end his career as Batman and liquidate the majority of Wayne Enterprises. To complicate things further, an injured Batman wakes up in an unknown location. Can Gordon, his daughter (aka Batgirl) and Batman piece everything together before the imposter’s plans are completed?

Conceived as a way of celebrating Batman’s 50th anniversary in 1989 (and presumably as a way to capitalize on Tim Burton’s Batman movie), Batman: The Lazarus Syndrome originally aired on BBC Radio 4. Dirk Maggs, famed for his “audio movie” approach to audio dramas, was selected to produce (and help write) this special radio play. The writing is well done for most part, although it does suffer from some minor weaknesses in the plot. Alfred and Dick Grayson are oddly helpless when it comes to dealing with the fake Bruce Wayne and never even entertain the possibility that he might be an imposter! It’s also pretty easy to figure out who the villain behind it all is, so the listener spends much of the 43 minute running time impatiently waiting for the characters to reach the same conclusion. There are plenty of references to past Batman storylines, both in the form of brief references and more fleshed-out flashbacks and explanations. original story and a “Batman 101” course for casual fans and those new to the world of Batman. Oddly enough, Batman is barely in this production, spending most of his time recovering until the final showdown. That said, the use of flashbacks by other characters nicely hint at his development, with memories of Batman early in his career feature him with a much chipper 60’s Batman-style hero rather than the grim, gritty Batman in the story’s “present day” setting.

Personally, I didn’t care for the voice they used for Batman and many of the voices for certain characters seem miscast to me. The less said about young Bruce Wayne and “Hispanic” gang members, the better. That said, I did enjoy the Commissioner Gordon and most of the female characters gave amazing performances and Michael Gough was perfectly cast as Alfred (Gough also portrayed Alfred from Batman to Batman & Robin ). Although I will admit that it does add to the “audio movie” feel, the opening fight sequence seems like a less than ideal place to start and suffers from some cheesy sound effects. Aside from some fighting and a few direct references to death, you could get away with letting children listen to this (although I advise adults to either listen to it ahead of time or listen along with their kids). Judging from what I’ve read online, Dirk Maggs’ later production Batman: Knightfall gets rave reviews and Batman: The Lazarus Syndrome is seen as more of a warm-up.

In addition to reissuing this once-neglected part of Batman’s radio history, AudioGo has gone the extra mile by remastering it. I should also note that this edition comes with new cover art to replace the original’s somewhat dated artwork. Surprisingly, this single-disc release is packaged in a cardboard box with a 3 panel cardboard slipcase. They also offer a “Value Priced Collection” packaging it with Maggs’ Superman: On Trial. From what I can tell from online reviews, it’s a combination of original story and documentary wherein Lex Luthor manages to get Superman put on trial for interfering in humanity’s business and several people, both fictional and real, have to testify on Superman’s behalf. Batman also appears in it, played by both Bob Sessions (who portrays Batman in all of Maggs’ audio work) and Adam West. It’s complicated and you’ll have to listen to it to figure out what’s going on. Like the subject of this review, it was created to promote Superman’s 50th anniversary in the 80’s and is often thought of as a warm up to the much more popularly-received Superman: Doomsday and Beyond (aka Superman Lives).