For those who are searching for unique horror items, one can’t beat Etsy.com. Each Tuesday, Gravedigger’s Local 16 aims to highlight one seller. If you’re looking to spruce up your look, redecorate your sanctorum or get a gift for that special something in your life, Etsy.com is your place for spooky econo.] 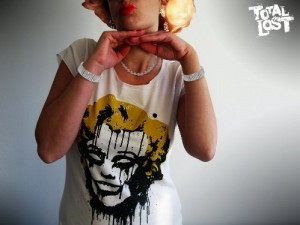 If you grew into adolescence during that period, there was a horrible trend of black t-shirts with white text on the front, usually broadcasting some witty saying. ‘The voices in my head tell me things’ or ‘Extinction can’t come fast enough.’ These shirts were a blight upon the land and remnants of this plague can still be found at fading Old Glory outlets and a few Hot Topics –or worse, Spencer’s Gifts—found at your local mall.

It wasn’t until the death of the 90’s (occurring sometime in 2001) that the nostalgia t-shirt, pre-weathered as if it were sincerely from the 70’s or 80’s, appeared at the top of the t-shirt pyramid. A new predator, just as invasive and devastating as the prior one, now roams about. At first, there was the idea of wearing a Jolly Green Giants ringer tee as a lark.

“Oh, just for shits and giggles. ‘Ho Ho Ho,’ right?” you might have heard someone say as justification for their purchase. From there, no brand or intellectual property was too obscure or too obnoxious to be bought, repackaged and sold back to us. This was hipness, some comfort in the IDEA of nostalgia even if, frankly, those buying the shirts never experienced the advertising mascots or cartoon characters firsthand when they were new. See a 23 year old wearing a Mr. Clean or a Scrubbing Bubbles t-shirt and you KNOW they’re frauding it up, right in front of you. That kid wasn’t FUNCTIONING or AWARE of these brands but yet displays them out of some mindless reflex.

It’s not bad. It’s no worse than kids wearing South Park t-shirts twenty years ago. It is evidence that no matter what time you were raised or how old you are, it is ESSENTIAL to have a healthy, discriminating eye when it comes to t-shirt. Or else you’ll end up with a closet full of Tazmanian Devils and T-ShirtHell.com rejects you’ll eventually try to dump at GoodWill.

Thankfully, there exists clever minds with good fashion making shirts for you to consider. One of these shops is Total Lost. 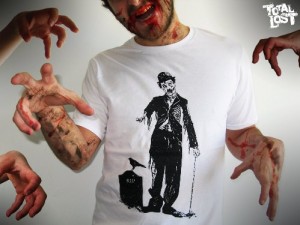 Why Total Lost picked Charlie Chaplin to zombify is up for debate. Could it be the Little Tramp’s tenure as an acrobatic talent with physical comedy is now ironically reduced through mortification? Could the passing resemblance to Poe and/or Hitler somehow factor in the spookiness? It’s not entirely clear and that’s slightly refreshing. It’s not Chuck Norris or Abraham Lincoln and thank goodness for that. 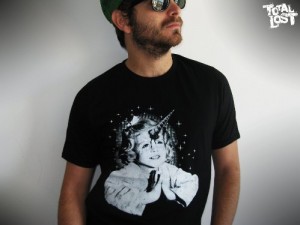 The accompanying line is “Sometimes I wish I were a unicorn” and thus, this hilarious bit of black+white gore can now be yours. Are unicorns passé now? We think we’ve passed the unicorn peak. Are we ready to move on or can we start wearing this in an anti-unicorn movement? It’s crazy. You better jump on this before it’s too late. 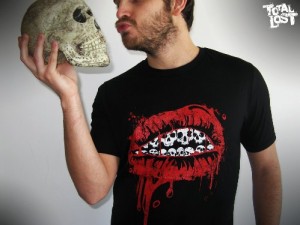 Designs like this from Total Lost are timeless, though. It’s a wonderful arrangement of visceral details in something that’s going to be hot (fashion wise, not material wise. It’s 100% cotton. It breathes) for decades to come. Plus, with the ink that Total Lost uses, the color will last longer than you. This is one of their best shirts and should be on your body this summer, fall and what you wear when they finally bury you, six feet down. 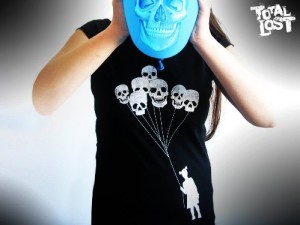 Little girls are creepy. You can’t really deny that. Every horror movie that involves an otherworldly, little girl is at least 14% more creepy than without. The Shining. Nightmare on Elm Street. Matilda. All are disturbing movies and you can wear that horror ON YOUR BODY. HOW INSANE IS THAT? 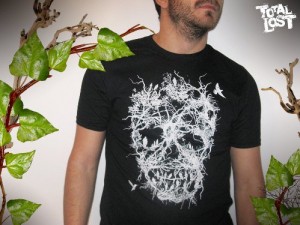 It’s turning springtime for the northern hemisphere, meaning that it’s fall somewhere. It’s always autumn somewhere. ALWAYS. But if you are either experiencing the leaves falling down to your feet, dead and gone, or just want to get a jump on things, this is the shirt you will buy today. A great, haunting pattern that is ready to say “I am a fan of the season where everything DIES.”

You should also be a fan of Total Lost. Find them on Facebook and at their Etsy Site. Buy, wear, be aware and be back here next week for another Tuesday uEtsy.