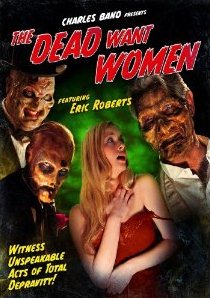 The year is 1927. Silent film starlet Rose Pettigrew is celebrating the completion of her latest film. During a celebratory orgy with some of her closest celebrity friends, she gets the news that talkies are taking over and her voice has gotten her bounced from all the studios. Instead of doing the smart thing and forming her studio using her wealth, she gets upset and takes it out on her friends. With a gun. Then she kills herself. Flash forward to today, where two friends/business partners Reese and Dani are trying to get the mansion cleaned up to impress a wealthy potential buyer. Little do they know that Rose’s friends aren’t as dead as one might think…

I’ll admit it, this film fooled me. When I first saw the cover, The Dead Want Women I immediately assumed it was a zombie movie. After all, the makeup jobs on the cover looked like what you’d see in a zombie film and like the first two zombie films from Full Moon, the word “Dead” is featured in the title. However, watching the film shows that the villainous actors are clearly supposed to be ghosts. Granted, they’re zombie-looking ghosts (and are even referred to as such in the “Making Of” segment), but they are ghosts none the less and I had to completely rework my original introduction to this article. And while it wasn’t a completely awful film that existed only to feature nudity and sex scenes like I had first guessed, it was still incredibly bad and did go out of its way to show nude women. Seriously, one of the participants from the orgy who spends the majority of her screen time naked (and without the rotting makeup that the other ghosts have).

While the film thankfully drops the “the location the protagonists are currently in has been magically sealed shut” trope that has been used many times in recent Full Moon films, it unfortunately opts to have the two leads be simply too stupid to leave until it’s too late. Granted, I suppose this behavior makes sense for people who try to tidy up an entire mansion a few hours before the buyer is scheduled to arrive, but still. Would you stick around a mansion after a friend wakes you up screaming about being attacked by three men? Guess what Reese and Dani opt to do. It’s not a spoiler or anything, as their acting intelligent in any way would keep the movie from happening at all. I also found it hard to get into the movie since, despite all we hear about Rose’s voice keeping her out of the talkies, it isn’t bad. Considering her smoking habit in the film, they really should have gone for a much nastier raspy voice. The makeup and computer effects are both disappointingly bad. I know it’s a low budget movie, but I had never seen a Full Moon film where the skin around the actor’s eyes was clearly visible in a make-up job until I watched this. Thankfully, there are some enjoyable touches here and there. The horror film star character Erik Burke is an amusing reference to both the Phantom of the Opera and the Burke and Hare murders the character Tubby Fitzgerald is a reference to Fatty Arbuckle. That said, he acts like more of a Curly Howard clone than Arbuckle. Eric Roberts gives the film some much-needed class in his portrayal as a Western star, although his presence here is surprising. I know that films like DOA: Dead or Alive and Sharktopus aren’t quality cinema by any means, but this seems like a comedown for him. On the plus side, it barely runs over an hour not counting the credits. The audio’s great, but the video does suffer from some minor shimmering at points. Thankfully, the widescreen transfer doesn’t suffer from any other issues.

As usual, Full Moon has included chapter stops but left out a chapter menu of any kind. The special features include a trailer for the film, a Full Moon trailer collection and a behind-the-scenes featurette. The trailer for the film is widescreen and of excellent quality, while the other Full Moon trailers are a mixed bag. Said trailers consist of DevilDolls, Killjoy’s Revenge, Skull Heads, Evil Bong 3: The Wrath of Bong, Killer Eye: Halloween Haunt, Goobers, Shandar: The Shrunken City and the same fullscreen promo ad for Full Moon’s “Haunted Casino” line of merchandise featured on the DVD for the movie of the same name. DevilDolls appears to be a quickie anthology film made from stitching together footage from Ragdoll, Doll Graveyard and Demonic Toys with brief computer generated transition scenes. While widescreen, the quality of the footage depends on what scenes from what films are playing. Killjoy’s Revenge is simply Killjoy 3 with a new title and as you’d expect, the trailer is exactly the same as the Killjoy 3 trailer seen on countless Full Moon DVDs (save for the title). The trailers for Skull Heads, Evil Bong 3: The Wrath of Bong, Killer Eye: Halloween Haunt, are the same widescreen trailers that have been seen on many of the Full Moon DVDs reviewed here and are of the same quality. The trailer for Goobers is fullscreen, which makes sense as this simply the trailer for the 90’s kiddie film Mystery Monsters with a new title, as is the case with Shandar: The Shrunken City (really The Shrunken City). The age of the films is extremely obvious due to the image quality. I also noticed that playing the trailer for those films results in the trailer playing over and over again until the viewer hits their “Root Menu” button. Why all the retitlings? My best guess is that it has to do with Full Moon selling titles to Redbox. The new titles are needed either to make a sequel seem more like a standalone film and to quickly pump out “new” releases for kiosk services to snap up. I suspect this is also the reason for the creation of DevilDolls as well.

The behind-the-scenes featurette clocks in a little over 15 minutes and packs in a lot of bloopers and raw footage. Everyone but Eric Roberts is featured, although Roberts is discussed by the others. They also talk about Charles Band. A LOT. Although one of them jokes about the level of butt-kissing going on, it’s still incredibly blatant. When they aren’t discussing those two, they do offer some insights as to their performance and what got them into acting. Similar to the making of segment for Killoy 3, the actress who spent the bulk of the film without any clothes on gets to appear fully clothed to discuss the experience. Among the interesting things we learn are that she had to wear a merkin and is trying to break out of the adult film industry. Sadly, there are occasional audio glitches and the audio levels are either very soft or very loud depending on the segment. Similarly, several sequences are very grainy and the interviews have particularly soft image quality to them. There’s even some bad interference at the end as well.

Oddly enough, it turns out my assumption about the film being a zombie movie wasn’t too far off the mark. Why? Because Full Moon is preparing their third zombie movie: Zombies vs. Strippers. I’m not kidding…

Bad Behavior has blocked 567 access attempts in the last 7 days.