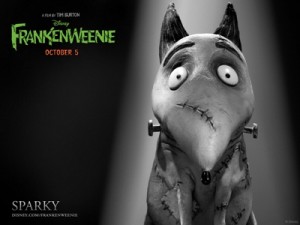 It’s unfortunate but I think I don’t hate Tim Burton.

I used to. Sorta. Hate is a strong word. But from 2005 up to last year, I could loathe Burton like everyone else, pointing out the obvious cracks in his career, bemoaning the “unoriginal thoughts” and “repetitive casting” of the same troupe of actors. I could and I did, with gleeful aplomb that I was in the right. Now, a year after ‘Dark Shadows’ came and went without doing much of anything, I find myself not hating Tim Burton. That’s probably a shame. I find myself feeling ambivalent and that might be even worse than if I were to hate him.

This thought all stems from standing in line at a chain sandwich shop that had decided, in its health-conscious way, to offer up reusable bags featuring the characters of the upcoming ‘Frankenweenie’ movie as a concept of a ‘kid’s toy.’ Whereas your burger giants will saddle some piece of Chinese plastic that does a trick or seems a miniature version of a real toy, this business had decided that kids really want manageable luggage options. While looking at the characters of Victor, Sparkie and Sparkie’s love interest, a black poodle with a beehive similar to that of Elsa Lanchester in ‘The Bride of Frankenstein,’ I realized that I didn’t hate Tim Burton anymore.

I tried to. Since then, I’ve tried to find fault with him making a stop-motion animated feature film based on a half-an-hour short he originally produced nearly thirty years ago. Phrases like “painfully recursive” and “mining your past  seemed to pop up and lure me thinking that after the five consecutive critically panned though financially lucrative films (all of which involved Johnny Depp, Helena Bonham Carter and in some cases, screenwriter John August, composer Danny Elfman and vampire Christopher Lee), Burton might be going a bit ‘desperate.’

The hate isn’t taking. Perhaps, I think, ‘desperate’ isn’t the adjective needed, but ‘safe.’ It appears that Burton is trying to get out of a rut, I’ll grant him that. Five consecutive movies that haven’t captured the magic of ‘Beetlejuice’ or the excitement of ‘Edward Scissorhands’ or the sheer fun of ‘Pee-Wee’s Big Adventure’ could be jarring to anyone. Maybe he figured it was time he did something different? It’s unfortunate but even as he achieves a success by not casting Depp or his wife in the movie, he falls back on the same bit of security.

The image of Sparky, the dog of ‘Frankenweenie,’  is of that of the dog from ‘Family Dog,’ the bizarre animated show spun off of an ‘Amazing Stories’ episode Burton worked on. It’s a stop-motion feature, much like ‘A Nightmare Before Christmas’ and though there is no Depp or Bonham-Carter in sight, the cast is made up of people who have worked with Burton before.  Catherine O’Hara, Winona Ryder, Martin Landau, and Martin Short all are involved in ‘Frankenweenie,’ all elements of Burton’s past prior to Depp/Bonham-Carter. Only Martin Landau has connection to the Depp/Burton era, acting as Bela Lugosi in Burton’s historic fictional film ‘Ed Wood.’ Is Danny Elfman doing the score? Do you have to even ask?

And yet, despite this evidence that Burton is not growing as an artist and has once again found a way to stay safely inside his boundaries, I don’t feel anything. I actually would like to see the movie, if only curious at the stop motion effects. It will be interested to compare it with the recently released ‘ParaNorman,’ another horror-themed stop-motion picture from Laika studios, whose prior release, ‘Coraline,’ was helmed by  Henry Selick, the director of ‘A Nightmare Before Christmas.’ Whereas Burton seems content to staying within himself, those who he has worked with don’t seem so complacent.

All these dour remarks about the movie are done not out of malice but out of habit. I’m apathetic towards anything Burton has done because it seems he’s perfectly fine recycling himself until he’s dead. He doesn’t seem ready to do another ‘Big Fish’ or even something outlandish like ‘Mars Attacks!’ ever again. Though confounded and slightly derivative as it was, even his ‘Planet of the Apes’ movie was something different.

But different hasn’t really sold a lot of merchandise at Hot Topic. How many ‘Mars Attacks!’ t-shirts are sold next to the Jack Skellington items? This is a sincere question – I haven’t been in a Hot Topic in years.

I think I’ve become comfortable with Tim Burton staying in his niche since he’s perfectly happy staying in it himself. You can’t be upset at a pig in shit if that’s what makes the animal happy.  Perhaps this means I won’t get agitated when Zack Synder uses slow motion, when Michael Bay blows something up or when Wes Anderson casts Bill Murray in his soon-to-be announced movie, alongside Jason Schwartzman and two of the three Wilson brothers.

Bad Behavior has blocked 809 access attempts in the last 7 days.