Even More Tricks and Treats

Checking On The Mainstream

or Strange Jason Goes to NYComicCon 2012

I went to the 2012 New York Comic Con and came home with a third hand. 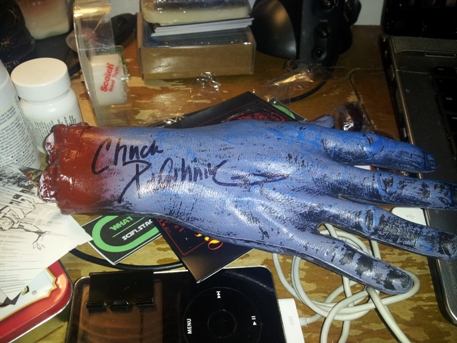 ‘Half-way’ would be the way I would best describe how I threw myself into NYCC. Out of the three days available for me and my companion, The 13th Doctor, we visited twice. We missed the Sir Terry Pratchett panel and forewent his autograph session when fans started lining up for it ninety minutes ahead of time. I resolved to skip the Evil Dead panel on Saturday in lieu of a sandwich and some sanity. We did catch a few panels, but made more connections with the artists in both the Alley and part of the Show Room on the third floor.

The Javits center in NYC is large, perhaps best described as ‘voluminous.’ It accommodated the thousands of people who attended all the panels and showings that took place on the three floors of the center. Artist’s Alley was arranged well with enough space for everyone to walk through. I regret not giving my card to more horror/spooky comics, and there were plenty. The Show Floor on the third level had multiple booths selling video games, television channels, comics and merch. Capcom. Marvel. DC. Lego. Nintendo. Plus, vendors selling everything you could possibly need or buy anyway if you didn’t. My alter-ego was able to pass out some cards and learn of some people. Here’s hoping they yield results.

The negative effect of the Javits space is that the sound collects. B Hall was a wide hall filled with two stages, the gaming area, the Autograph Arena and enough spare floor space for the 501st to conduct ‘Shoot a Trooper’ as well as a live Quidditch demonstration. Not to mention the hall is situated in the middle of foot traffic. Trying to hear the panel of actors read through ‘Kill Shakespeare’ was hell. But it was fun to have Chuck Palahniuk’s “Cannibal” story float about the people lining up for Carrie Fisher’s autograph.

Pahalniuk’s reading would end Saturday for me and the 13th Doctor. Thanks to her, I was able to score a free copy of ‘The Damned,’ Chuck’s latest book as well as an autographed severed hand. Before the reading, after it and during the Q&A session, Chuck and his assistant tossed out arms, legs and hands to the crowd. They were each signed. Seems Chuck offered his hand to The 13th Doctor, but she turned it down and gave it to me.

I only do well with large amounts of people when they’re in cemeteries. The crowd at NYCC was too above-the-ground for me. It was still good to go and see where the mind of popular culture was currently pointed.

The last comic book I bought was a Giant-Size collection of the House of Mystery that DC put out. 500 black and white pages for twenty dollars. That might have been Christmas, 2007. I was on my way out of my comic phase, putting myself on a path towards this life of Gravediggers and podcasts. The point of going to NYCC this year wasn’t a case of jumping back into the pool headfirst. The culture of the nerd/geek, once perceived as the fringe, has permeated deeply into the mainstream. NYCC was a way to check in on the geek culture while its hot and to keep an updated perspective. I wouldn’t think the ‘Person of Interest’ panel would nearly fill the huge room it took place in but it did. I knew people would line up for ‘The Walking Dead’ panel but not starting at 11am for a 6pm showing.

This is the growing majority. It was a good visit.

Bad Behavior has blocked 1875 access attempts in the last 7 days.