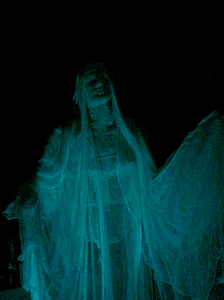 The Flying Crank Ghost is one of the most effective props you can have at a haunted attraction. It not only looks incredible, but it also has an air of mystery as to how it’s accomplished. You can tell that it’s great just from the picture above, but even that can’t do it justice. Let’s see one in action:

Invented by Doug Ferguson of Phantasmechanics, the Flying Crank Ghost (or as it’s commonly referred to, the “FCG”) made a big splash in the haunting community during the mid-to-late 90’s. Naturally, many people built their own versions and made variations on the concept. One person even made a small version of one using Legos! I’ve also seen a budget version called “Chee Po’s Flying Crank Ghost” that uses oscillating fans to operate it and one creative haunter who used a miniature version of the FCG setup to power a small alien prop. There’s even a “Dangling Crank Spider” floating around out there!

Even the traditional “wig head and cheesecloth” marionette was altered to great effect, giving way to light up eyes and concepts like headless ghosts and creepy spectres. Although originally designed as a puppet for a LARP event, I think this prop would make a killer FCG variant. My personal favorite variation isn’t even technically a Flying Crank Ghost. Instead, it’s a wearable puppet designed to look and move like a FCG. Then when visitors dismiss it as just being an animated prop, the operator lunges out at them for a great scare. This works best if it’s done in a room that housed an actual FCG in previous years. Another greeat way to get some extra mileage out of a Flying Crank Ghost is to combine it with the “Pepper’s Ghost” effect to create a moving ethereal image. Imagine looking into a seemingly empty space, only to have a moving ghost materialize into view!

While far from obscure, there’s still enough unfamiliarity with the FCG among the general public that makes it far more effective than the kinds of props that got used by everyone and their brother after low cost versions appeared on the market. Sure, it’s very well known among haunters and Halloween enthusiasts, but your average person is a different story. I’m positive that at least a few of you reading this had never even heard of the concept before, let alone seen one in action. Even if they suspect they know how it works, they’ll probably imagine that it’s far more complex than it really is. Kind of like all the people out there who think the “Pepper’s Ghost” effect is actually a hologram. What few premade versions there are out there are either solely available through online retailers known only by hardcore Halloween buffs or as stripped down versions that are such (in my opinion) pale imitations of the FCG that many might not realize what it’s based on.

I suspect the other reason for its lack of overexposure is its method of overhead operation. Unless you’re willing to drill holes in the ceiling, you’re going to have to construct a frame of some kind to hang it on. Depending on where you plan on displaying your creation, the use of a frame might also require the building of a crypt or mausoleum. Not everyone has the time or storage space necessary for such an endeavor. But hopefully you do!

I personally feel that the Flying Crank Ghost isn’t nearly as complicated as one might think and is a very worthwhile addition to your haunted attraction or Halloween display. You’re practically guaranteed to be the talk of the town if you build one. In addition to all the links I’ve provided above, there are plenty of other tutorials out there to help you.