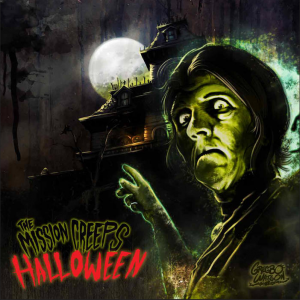 For those of you who missed my first article about The Mission Creeps, I’ll explain. Although well-known for their particular brand of dark surf music, it’s not unusual for them to switch genres and styles several times over the course of a single album. Their newest release, Halloween, is no exception. It “only” has nine tracks, but I can guarantee that both the length and quality of said tracks more than make up for the relatively small number of tracks

“Halloween (Theme)” kicks things of nicely with howling wind and a distorted voice that lead us into this musical tribute to the best holiday ever. Not only that, but the catchy guitar work and wailing backing vocals kick all sorts of ass. “Witches” has a kind of a dancey, somewhat Twilight Zone-like feel to it and introduces a technique that reoccurs several times over the course of the album: the use of two distorted voices repeating a selection of creepy phrases. In fact, “Dragging the Body” demonstrates this nicely as one voice orders someone to “drag this body to my laboratory” while a robot voice says “I’m the servant” over a theremin. While other horror bands are content to only sample horror movies, the Mission Creeps set themselves apart by creatively using actual recordings from a Southern Arizona Ghost and Paranormal Society investigation of the Oliver House & Hotel in Bisbee, Arizona in the next track. “The Plum Room (with Sounds from a Real Ghost Investigation)” refers to the hotel’s infamous “Plum Room” and features some great light guitar and drum work. “Space Probed” showcases both the band’s dark surf skills and distorted versions of our two favorite spooky voices. Said voices are at their best in “The Butcher,” where the more authorative one issues commands like “Move along, America is hungry,” “Stun the animal” and “Bring me my cleaver” (to name only a few) and the secondary voice sounds like a demonic Err that adds its own comments on the matter. The sheer bizarreness makes one almost forget about the excellent guitar and drum work. Although we hear cows mooing, some of the commentary (and this Wondershowzen-esque music video) imply that humans are actually on the menu.

The final song, “Cross Over,” has a rather electronic feel to it due to the “boop boop” music that plays while the singer says “You need to cross over.” Although this is the final song, it’s not the final track. Given that the album is devoted to Halloween, it makes perfect sense to include a scary story. “Shadow: A Parable (Edgar Allan Poe: 1835)” features the spooky tale of an encounter with a ghostly being in a room being read by a deep voiced male narrator, with eerie backing music and wind effects softly playing as well. The final track is another Halloween staple: spooky sound effects! That’s right “Land of the Departed (Haunted House Soundtrack)” is a half hour soundscape full of ghostly moans, thunder, creaking doors, snakes, cats and more! It’s like an upgraded version of those spooky sounds CDs you can find everywhere this year and its running time makes it perfect for looping (especially if you play it while playing out candy tonight).

In short, this album is a must-have for fans of great music and Halloween chills. You can enjoy the music all year round while saving the other tracks for use in October. In fact, I wouldn’t mind hearing more ghost stories and soundscapes from the Mission Creeps either! You can also read more about the creation of this album by reading this article on the matter.

I have always shared a music video in every past Halloween countdown and this year is no exception. So, direct from the official Mission Creeps Youtube channel comes the group’s video for “Halloween (Theme)”: