The year was 2008. As Gravedigger’s Local 16 was in its early stages, Strange Jason and I were in constant communication about fodder for the Halloween countdown. So when Jason found out about a contest about making Jack O’Lanterns from things other than pumpkins, we immediately agreed that I had to enter. Originally, I was going to puncture a face in an empty soup can, but that plan ran into a snag when the can opener I needed for the project went missing. But things got back on track after a quick search of the house turned up an empty pizza box and a bulk box of Lean Pockets. Sadly, I didn’t win the contest (let alone get honorable mention). I did, however, throw up all the pictures onto my Myspace page as part of a Halloween special and eventually forgot about them due to both the development of Gravedigger’s Local 16 and the fading popularity of that particular social network.

It wasn’t until recently that I remembered the pictures and made the decision to share them with you. Now these former Myspace exclusives are available to the general public for the first time, along with a look at their creation. 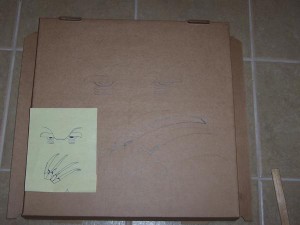 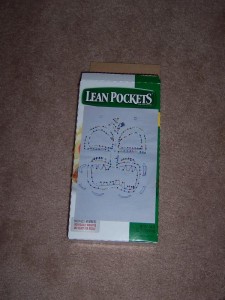 Jason had previously shown me a few pumpkin stencil websites before he learned about the contest, which inspired me to go that route rather than do something with a traditional Jack O’Lantern face. But since they were all pay sites, I opted to just design my own stencils.

Yeah, I said “stencils.” I was torn between doing a design that showcased my my love of Tiki and another based on Freddy Krueger. Naturally I decided to do both. The rules never said anything about having two submissions in the same picture and the person running it never answered my email asking for clarification. So I grabbed some scrap paper (which was ironically left over from an abandoned Tiki project of mine) and got to work.

I can’t say the designs were wholly original. The Tiki one was made from a combination of features from various Tikis I found online and I think the Freddy one was inspired by elements from two different Freddy images that I thought looked cool. Sadly, I’ve long since forgotten the exact URLs for the images that inspired me. As you can see, I had to draw a larger version of the Freddy design on the pizza box while the Tiki lantern’s size allowed me to do the traditional “pins poked through the design sheet” method. Doing this made me realize that if I doubled up on the amount of pins stuck in the design, I could give my Tiki a “tribal” look. 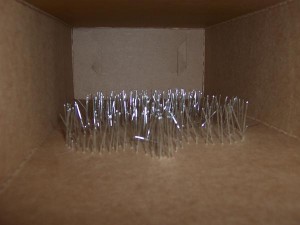 Needless to say, I used an entire package of pins to obtain this effect. I can’t even remember how many bent pins I either threw out or attempted to reuse before throwing them out. You had better believe those pins did double duty on the Freddy box as well. Speaking of which, let’s look at the finished product: 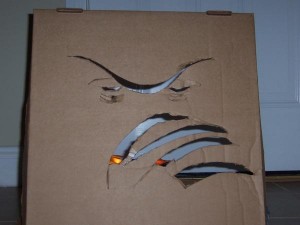 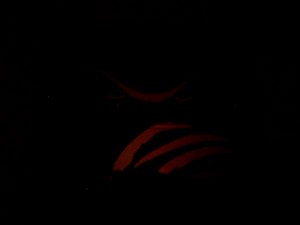 I don’t know about you, but I think this turned out great despite the roughness of the cuts due to my only having some scissors and a butcher knife to work with. I suspect things would have turned out even better if I had any X-Acto knives. Some of the glove detailing was lost in translation and I had to widen the brow to get the lighting effect to show up on camera. Candles were out of the question due to the flammable nature of the boxes and my alternate lighting methods were limited due to the size and shape of the boxes. The night shot shown here was achieved with a miniature faux fire unit positioned behind the pizza box. Said unit can also be partially seen in the daylight shot as well. 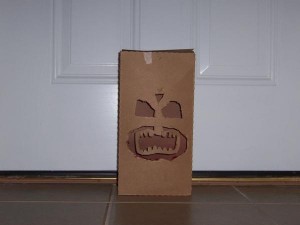 The carving job was much rougher on the Tiki lantern. In fact, I had to skip out on some of the planned details shown in the sketch that’s pictured earlier in the article. I also had to turn the box inside out to both enhance the lighting and make it look more like wood. 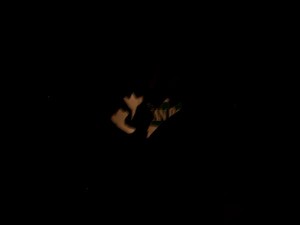 Here’s what I thought would be my secret weapon in the contest: A trio of small ghosts carved in the back of the lantern that were positioned well over the face on the front. The idea was to have the light source project an ethereal image on the wall behind the lantern in addition to lighting the face. The idea was “borrowed” from the sample section of one of the pumpkin stencil pay sites Jason had shown me. Sadly, the position of the ghosts and the light didn’t quite work. Using a regular flashlight would project the ghosts but make the face look “off” while the faux flames lit only the face and not the ghosts. But since you could easily see the fake fire, I opted for covering the flashlight with red cling wrap. It also made for a better look in the night shots of the Tiki lantern. 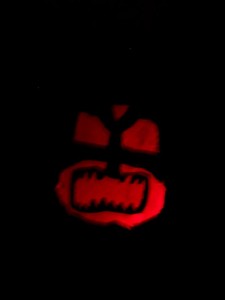 Although the tribal detailing looked amazing in real life, all attempts at capturing it in a picture failed miserably. It’s a shame that the planned thin line around the Tiki’s mouth eventually morphed into a huge gap due to the carving issues I mentioned earlier. 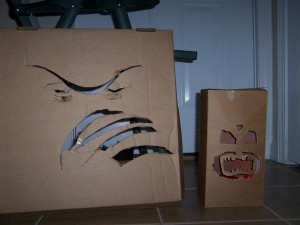 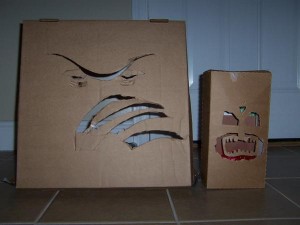 As you can see in the above pictures, I changed the light source for the Freddy lantern. Although the fake flames looked great, using a flashlight let me pick up more of the detailing on the box. Since my spare flashlight is a huge Maglite, I had to play around with its distance from the box. As you can see, I had initially attempted to keep the box propped up on a chair while positioning the light as far behind it as possible before settling on another method in order to get the desired effect. I was also pleased to see how the different color lighting also helped contrast the two lanterns. 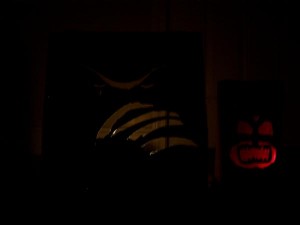 Sadly, I no longer have either lantern. The pizza box had a huge grease stain on the back that made any plans of keeping the lantern impossible. I did hold on to the Tiki lantern for awhile, but the tape holding the inside out box together kept coming loose. It too became a donation to the recycling bin after I got sick of patching it over and over again. If I had to do it all over again, I’d pick a somewhat smaller box for the Tiki lantern (and lower the position of the ghosts on back) in order to get a better lighting effect. I’d also pick up one of those cheap battery operated pumpkin lights as well. As for Freddy, I’d use a stain-free (possibly unused) pizza box so I could keep in in storage for future use. The flat shape not only makes it easy to store, but makes it easy to prop up in a window so that all people will see is a glowing face in a darkened window. As I wouldn’t have to worry about winning any contests this time around, I’d keep the original (but sadly unphotographed) thin slit of a brow shown in my original sketch. I’d also invest in some better carving tools so my designs would be more precise…