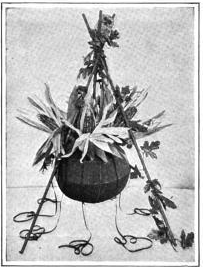 Although the obscure slasher Home Sweet Home took place on Turkey Day, the best known Thanksgiving-related horror movie was a little “gem” called Blood Freak. While the holiday doesn’t play a role in the plot, its focus on a turkey-headed monster guaranteed that the film would be forever associated with it. Thanks to deadenddrivein, you can see the trailer for it below:

Maybe it’s due to the fake trailer for a Thanksgiving-themed horror movie from Grindhouse, but Thanksgiving-themed horror has started growing in recent years. In addition to the film ThanksKilling taking away the “only movie featuring a turkey monster” claim to fame from Blood Freak (although it still is the only Christian anti-drug movie to feature one), Florin Nicoara has authored a horror comedy ebook called Gobble Gobble featuring a mutant turkey beast going on a rampage on Thanksgiving! Said ebook has a free preview available in that link as well. If that isn’t enough for you, check out this episode of Traumatic Cinematic devoted to ThanksKilling (complete with an interview with one of the actors).

Finally, here’s a look back at all of my previous Thanksgiving celebrations here at Gravedigger’s Local 16:

Bad Behavior has blocked 711 access attempts in the last 7 days.