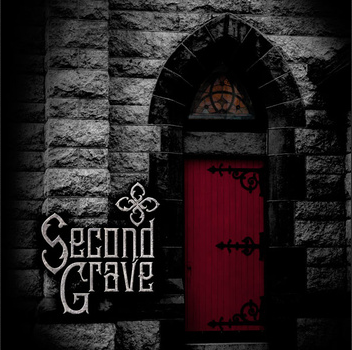 The story of Second Grave begins with a simple conversation. Chuck Ferreira was speaking with fellow musician Krista Van Guilder and offered his skills as a drummer if she ever wanted to team up for a future project. Although it took awhile for that time to come, she did take him up on his offer. Since their vision required more than just a drummer and a frontwoman/guitarist could provide, both guitarist Chris Drzal (who previously worked with Krista in Obsidian Halo) and bassist Dave Gein were also recruited and Second Grave was born. Despite the band being fairly new (They made their first appearance in August 2012), they’re far from inexperienced. Krista Van Guilder also performed with Warhorse and Lucubro, Chuck Ferreira played in Nodscene, Chris Drzal was part of Suckapunch and Dave Gein put the “Gein” in “Gein and the Graverobbers” in addition to his current work in Black Pyramid!

“Great opening” best describes “Through the Red Door,” both in terms of starting the album and the song’s actual opening. The whispering wind effect at the beginning (and end) is very atmospheric and works extremely well with the echoing guitar work. But although that track is great, it’s actually “Covet” that acts as an introduction to the group’s style. After a moody soft opening and instrumental buildup, everything revs up as a prelude to Van Guilder’s effective vocals. “Mountains of Madness” is one of my favorite tracks, thanks to it being both catchy and apocalyptic. Everything is perfect in this-the drums, the guitars and the vocals (throaty growls thrown in for good measure towards the end). I especially appreciate how it manages to capture the feel of Lovecraft’s work without resorting to Mythos name-dropping.

Soft guitars get the spotlight in the instrumental track “Salvation,” which starts off “folksy” and then takes on a medieval ballad feel. Its calm and soothing nature makes it both short but sweet and a musical palate cleanser. “Soul Extinction” is another favorite of mine. As you can hear for yourself above, everything is just right (at least by my standards) and there’s an amazing vocal performance to boot. In “Divide and Conquer,” the percussion seems to be star of the opening. Although some might find the low key guitar work during the song’s midway slowdown to at odds with the rest of the track’s heavy tone, I think that the contrast not only works, but also adds some distinctive flavor the the track. In other words, it’s the perfect closing to the album.

My experience with metal is admittedly limited; I’m only familiar with Thor, Dethklok and a handful of other bands. As you can expect, the seemingly endless amount of subgenres of metal are largely a mystery to me. But if Second Grave represents what doom metal is like, then sign me up for more!

Second Grave has made one hell of a first impression in their self-titled debut album. As an EP, this “only” has
six tracks and runs a little over a half hour. But believe me, you’re getting more than your money’s worth here. The majority of the tracks are rather lengthy (but never overstay their welcome) and you’re sure to find something you’ll like. What else can I say? It good. Me like. You buy. NOW.

But Second Grave isn’t going to rest on their laurels and has lots of plans for 2013. They are going to play with bands like Pilgrim, Lord Fowl, Gozu and Black Thai, in addition to opening for Castle when they tour through New England. They’ve also scheduled to play at the Stoner Hand of Doom festival and have plans for both a vinyl LP release and a follow-up album later in the year. So keep on eye on this band; I see great things in their future.

Special thanks to Second Grave for use of the image!