“A Lot Of Art Is Ditch Digging.” Beauty Is Embarassing

Have A Happy Valenslime’s Day! 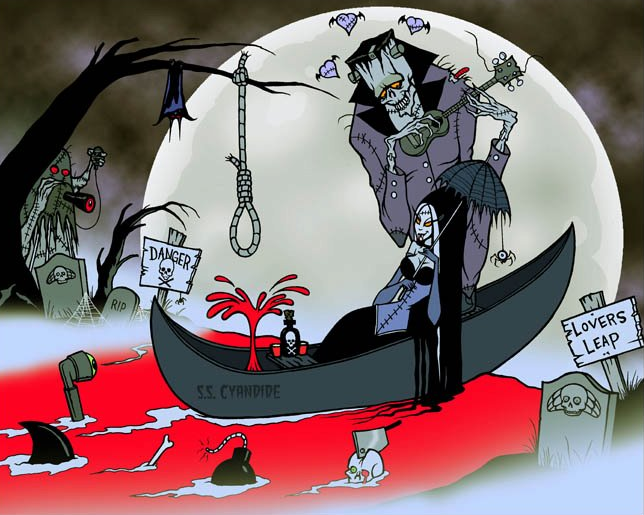 The above spooky Valentine’s Day image is the work of one Eric Pigors. Being a horror fan, you’ve probably come across his work online at some point. In fact, readers of this site should easily recognize his work from the cover of Gore Galore’s Sounds of Gore sampler CD. However, chances are that you (and non-horror fans) have seen his work countless times without realizing it. That’s because he’s been involved in the animation industry for many years, doing work in both television and feature films. His most recent assignment (as of this writing) was a stint on The Looney Tunes Show. Hopefully, his next one will be the dream job that lets him showcase his wonderfully unique Toxic Toons (named for an incident involving a can of spray paint).

I highly recommend that you check out his official website to see more of his above-mentioned works. In addition to all of the great images, he also offers tons of merchandise including (but not limited to) shirts, stickers, calendars, masks and even Valentine’s Day cards! Although his annual Valentine’s specials are all sold out until next year, you can still console yourself for missing out by joining the Secret Society of Fiends Klub.

Special thanks to Eric Pigors for use of the image!

Bad Behavior has blocked 1116 access attempts in the last 7 days.