Funded and Beyond: The Phenomenauts and crowd-funding issues.

For Your Consideration…Dr. Gangrene for the 2013 Rondo Awards

For Your Consideration, Dr. Gangrene in the following categories: 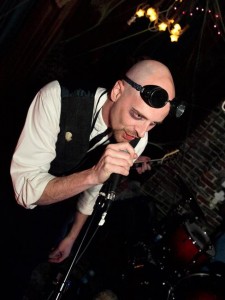 For nearly fifteen years, Dr. Gangrene has been a fixture in both the local horror scene in Nashville, Tennessee but also on the national scale, through self-syndicating his program and by adapting quickly to the Internet. His efforts proved fruitful, as 2011 left a hard act to follow for Dr. Gangrene. He started up Dr. Gangrene Presents, returning to a half-hour format, much like how his first show, Chiller Theater, was when it debuted. He was nominated for three local Emmys, for his Halloween special with Penny Dreadful, A Dreadful Hallowgrene Special, as well as for his ‘Go Green with Dr. Gangrene’ which incorporated horror elements in a public campaign to raise awareness about simple things one can do to improve the environment. He threw together the Horror Hootenanny, an event capping the Nashville Zombie Walk, and ended the year by appearing in the funny pages as a character in the Dick Tracy comic strip. 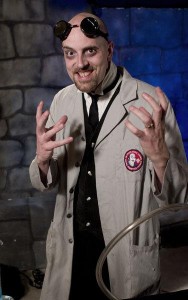 Not one to rest on his laurels, Dr. Gangrene took to 2012 headfirst. Dr. Gangrene and his crew produced an epic number of episodes of Dr. Gangrene Presents, ultimately wrapping up his current tenure as a television horror host. An audio foray had him conducting interviews with the likes of Ari Lehman, Jon Mikl Thor, Dee Syder, Dead Dick Hammer and more for Dr. Gangrene’s Metal Morgue, for the 6’+ podcast. 2012 saw Dr. Gangrene’s analytical mind take to the printed page. Always one to pen his ideas at his popular website, his ideas can be read in The Doctor Is In-SANE, regularly found in Scary Monsters Magazine. 2012 saw another instance of the Horror Hootenanny, where Forbidden Dimension returned to the US for the first time in what seemed like forever, thanks to the organizational efforts of Dr. Gangrene.

For Dr. Gangrene Presents, he could easily be considered a winner for Category 22, Favorite Horror Host. For his writing for both The Doctor Is In-Sane and his articles in Scary Monsters Magazine, he surely would be deserving to win in Category 15, Best Magazine Column. Even for maintaining an informative and constantly updated website, he could win another Rondo for Category 18, Best Website.

It would be sensible that Dr. Gangrene would be awarded one of these Rondos. He certainly has earned them. He would also have earned Monster Kid of the Year, for his cumulative efforts but also for the fact that Dr. Gangrene is an appreciative fan at heart. For 2012, he spearheaded the campaign to have Morgus the Magnificent inducted into the Hall of Fame and this year, he has nominated Count Gore De Vol, famed horror host who pioneered the way for people like Dr. Gangrene. Dr. Gangrene would not nominate himself for either the Monster Kid of the Year award or for the Hall of Fame, as he would (and has in the past) nominate people he think are much more deserving of the spotlight than him.

Dr. Gangrene is a man of many talents, all of which have been put to celebrate the culture of horror movies, of monsters and of weirdos both on and off the silver screen. In additional to being a personality of film, television and stage, Dr. Gangrene, or Larry Underwood, is a highly talented artist. His skills can be seen in both his digital and painted works. He has always pushed himself to not be constrained by one medium. So far, 2013 has seen Larry Underwood publish two short stories in his ’13 in 13’ series, currently available on Amazon.

For the 2012 Rondos, consider Dr. Gangrene for the above categories. Awarding him a Rondo would show gratitude for his efforts and offer encouragement for the future. The scene needs more ambitious supporters like Dr. Gangrene and one way to ensure that is those who put forth the effort receive their deserved recognition.

*While Dr. Gangrene was not behind the creation of 6’+, his participation in it during 2012 is one of the main reasons why it was a banner year for GdL16’s companion podcast. But, more on 6’+’s nomination later this week.

Bad Behavior has blocked 2376 access attempts in the last 7 days.