Funded and Beyond: The Phenomenauts and crowd-funding issues.

For Your Consideration, Tom Bagley in Category 35 – Monster Kid Hall of Fame

Professionally, Tom Bagley has been involved in the world of monsters for twenty-five years, both as a professional illustrator and, as Jackson Phibes, the front man of the legendary cult horror punk band, Forbidden Dimension.

Back in 1988, Jackson Phibes started up Forbidden Dimension as his prior project, Color Me Psycho, was ending. Taking up the horror mantle, Forbidden Dimension has continued to exist for a quarter of a century, with its most recent release, The Golden Age of Lazers, coming out last year.

If twenty-five years of fronting a horror rock band isn’t enough, Tom Bagley has flourished as an artist whose style is unique and instant recognizable. He has provided artwork for bands like Calabrese, Man…or Astro-Man?, GWAR, Chixdigit!, The Benders, Servotron, and more. In addition to this, Tom continues to illustrate a cavalcade of creatures, showing his love for the horror genre. With a noted taste in films both well-known and obscure, Tom has been a grand ambassador for the horror genre. 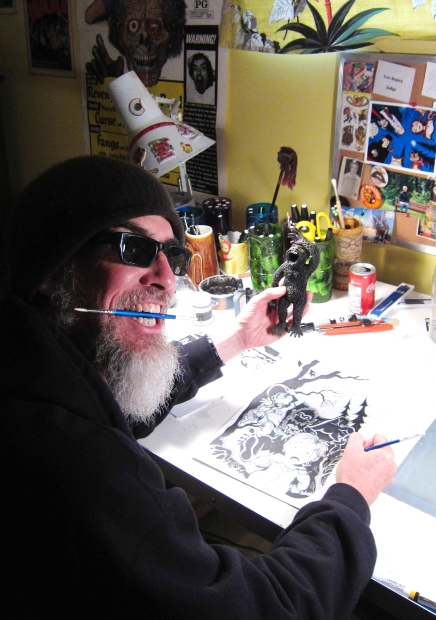 Furthermore, Tom has been a good representation of a ‘Monster kid,’ someone who truly loves monsters and horror movies. He has remained humble and really grounded, finding ways he can give back to the horror community. His artwork and music has celebrated a lot of the forgotten stars of horror, sci-fi and all that lies in between. For 2013, Tom Bagley should receive recognition of his work and efforts, even if just to say ‘thank you’ for all the years of dedicated service.

In this, the silver anniversary of Forbidden Dimension and of him professionally giving himself to art, Tom Bagley is worthy for entrant in the Monster Kid Hall of Fame. The community-aspect of the Rondos, how winners are those voted in, is why the awards matter. It’s not a case of a small group deciding which is better, based on subjective taste. Instead, it’s a way for those who enjoy a piece of work to have it receive the kudos thought to be forthcoming. This goes double for the Hall of Fame, since there is no nomination short-list. Simply, it’s a case for those fans of monsters and horror to organize and promote someone they think has earned a moment, a single moment, of gratitude.

For your consideration, in the category of the 2013 Monster Kid Hall of Fame, please vote for Tom “Jackson Phibles” Bagley.

For further information about Jackson Phibes/Tom Bagley, listen to Episode 40 of 6’+ (“Into The October Country”) where Dr. Gangrene interviews him before the 2012 Horror Hootenanny, featuring Forbidden Dimension’s first stateside appearance in years.

Bad Behavior has blocked 1916 access attempts in the last 7 days.