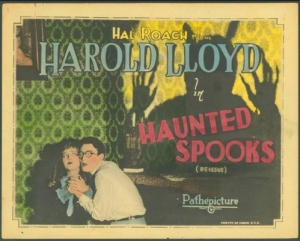 Haunted Spooks is the classic story of boy meets girl, boy loses girl, boy meets other girl and immediately weds her so she can receive her inheritance, boy gets girl despite her scheming relatives dressing up like ghosts to scare them off.

Despite some similarities in subject matter this film has with Buster Keaton’s The Haunted House (I should note that Haunted Spooks came out a year before Keaton’s film), I personally feel that this film is funnier. While Keaton’s movie dragged at times, none of the jokes here do. When Harold Lloyd’s character is trying to get permission to marry a woman he’s in love with, the gags come at a fast and furious pace and they all naturally fit the setting without becoming repetitive. But Keaton definitely has the advantage when it comes to the sheer number of ghosts and creepy creatures that appear in his film compared to the handful of people in sheets (and a few cases of mistaken identity) in Lloyd’s. One of said ghosts uses the bizarre “ghost with ears” design that was rather popular back in the day and still occasionally pops up in modern times (such as in Stephen Mooser’s Secrets of Scary Fun).

Sadly, the fun is somewhat spoiled by the film’s racist depiction of its black characters. In addition to an offensive caricature in the film’s illustrated intertitles (along with the cringe-worthy decision to depict their dialogue in “dialect”), they’re all portrayed as servants who become very “comically” frightened and bug-eyed over the very idea of ghosts. It’s a small consolation that these characters play a very small part in the film as a whole.

Haunted Spooks is also notable for being the first film to be released after Harold Lloyd’s being injured during a publicity shoot in the summer of 1919. He was in the process of filming Haunted Spooks at the time and had stopped to pose for some publicity pictures on set. What was thought to be a harmless prop bomb was fetched for Lloyd to pose with (although no bombs appear in the movie). However, it was actually a working smoke bomb and went off when he lit a cigarette with it. The explosion cost him the thumb and forefinger of his right hand and nearly ended his career. A special prosthetic glove was made to conceal the injury from his fans. Why? Because it was feared that they would worry about the dangers of his stunts rather than laugh at his onscreen antics. Filming resumed after he recovered and Haunted Spooks was released the following year. All of his movies made after this focused less and less on physical humor.

Being only 25 minutes long, the film has only surfaced on video a few times. The best of these releases was its inclusion in the “The Harold Lloyd Comedy Collection” DVD boxset, the transfer of which is also available in the much less expensive “The Harold Lloyd Comedy Collection Volume 3” DVD. Even though the film has been remastered, I was never able to spot any telltale signs of the glove (a true testament to the director and maker of the glove). I don’t know if this will make any sense, but I feel that Haunted Spooks is the funnier comedy while The Haunted House is the funnier haunted house-based comedy. As much as I enjoyed the film (and its insight as to why Christopher Reeve based his portrayal of Clark Kent in the Superman film series on Harold Lloyd’s screen persona), I’m also torn about recommending this otherwise hilarious film due to its use of racial stereotypes. I’ll leave that decision up to you (but will vouch for the rest of the film being good).