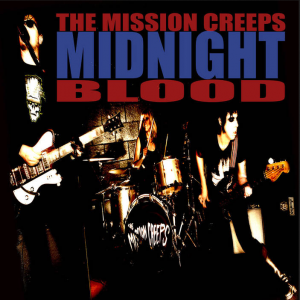 For fans of the Mission Creeps, the release of Midnight Blood has been greatly anticipated. Considering how it was initially teased with the inclusion of this album’s title track as a special bonus with some editions of their album Halloween, it’s been quite the wait. But you know what? The wait was well worth it.

For those who love how the group utilizes multiple musical styles in their work won’t be disappointed by this album, with several tracks having a definite “alternative” feel. However their original surf influence still bubbles up to the surface from time to time. One such example is “Igor’s Mind,” whose opening definitely has a rolicking surf feel. I enjoyed the lyrics’ having cinema’s most famous assistant reflecting on his life. It took me a couple of listens to catch this, but the line about him being blind in one eye is a direct reference to the original version of the character…named “Fritz.” Fritz first appeared in the stage adaptation of Frankenstein, which was the basis for the famous Universal movie. How did Fritz become Igor over the years? Well, that’s a long, complicated story. Since my praises for “That Kind of Man” and “Skeletons” are of the very short “I like it” variety, let’s skip to the album’s titular track. “Midnight Blood” has what I like to call a weighty intro. It’s too fast to be called plodding yet at the same time too slow to be considered speedy. I like it and it suits the rest of the song’s tone nicely.

“Johnny Cash” is a wonderful tribute to the master that perfectly captures his style. It’s also appropriate, given that both Cash’s and the Mission Creeps’ work often shifts across numerous genres and has lots of crossover appeal. Cash was clearly a huge influence on this album, as the distinctive feel demonstrated here shows up on several other tracks in the album. In fact, a few such touches can be heard on the rockin’ track “She’s My Witch.” “Hand on the Rail” simply has to be heard to be truly appreciated and the similarly great “Keep the Dirty Side Down” is a reference to CB radio slang, which also might be a reference to how Cash was known to chat with fans via the CB radio on his tour bus). As crazy as this may sound, “Can’t Find Any Brains” has a a sort of laid back intensity to its tale of a zombie on the prowl, which starts softly and soon cranks things up. Finally, “Any Good Zombie” closes things out with a very catchy hybrid of surf and the alt rock feel heard on most of the album. I particularly like this track’s official music video (which uses a technique similar to what Alfred Hitchcock used in Rope). In short, it’s a great end to a great album.

After having reviewed three of their albums, I feel pretty confident in saying you can never go wrong with the Mission Creeps. I’m already eagerly awaiting their next album…