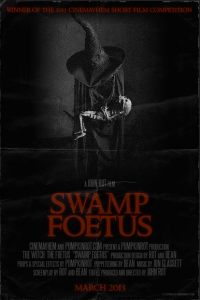 Like any Halloween enthusiast, I’m a huge fan of Pumpkinrot. I love the creepy, distinctive look of his props and keen eye for setting up (and photographing) great scenes. So when I found out the man behind that website had made a short film, I was ecstatic. Even moreso when I learned it had won the 2013 CineMayhem short film competition and was available for free download.

Swamp Foetus has no dialogue whatsoever and instead opts to use only its music and beautiful cinematography to tell its story. This is an extremely effective choice, which builds a sense of mystery and unease about the doings of its protagonist. The theme offers many chills and yet also brought to mind many memories of long walks home during a cool October evening. The costume and props in the film definitely stand out on their own while at the same time stay true to the spirit of his older work. In fact, I could see touches of his 2009 “Field Witch” display in it.

According to an email I received from the man behind Pumpkinrot, the film originally went into production in 2010 as “Swamp Fetus” but he changed the spelling to “Foetus” after hearing about Poppy Z. Brite’s short story collection Swamp Foetus (also known as Wormwood) as both a tribute to the author and because it added an extra touch of class to the title.

The Pumpkinrot blog also has a wealth of information about the making of Swamp Foetus. In addition to recounting the filming experience with his wife, he also reveals there how the excellent poster was created by Guy Miller from House Bloodthorn and his history of collaborating with the film’s composer.

But enough of my going on and on about the film. You can find the download link here, along with an awesome photo galleries from Swamp Foetus and his 2011 home haunt utilizing some material from the film.

Since the movie is a little over seven minutes in length, I’m going to do what I did the last time this series featured a non-feature length film: share a bunch of other short films! Thankfully, Pumpkinrot has several other Halloween videos available. Fans of Swamp Foetus will be especially interested in Halloween 2008 Burning Smile Remix and 2009’s The Corn Witch, which had original scores prepared for them by John Glassett.

Speaking of Mr. Glassett, you can download the theme to the film for free here. You can also read his comments about creating it at his official website.

Special thanks to Rot for use of the image!

Bad Behavior has blocked 946 access attempts in the last 7 days.