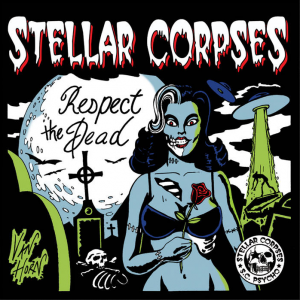 Taking their name from the astronomical term for dead stars, Stellar Corpses first appeared on the Santa Cruz music scene in 2005. Drawing from a wide range of musical inspirations including (but not limited to) Black Flag, Social Distortion, Black Sabbath, The Misfits, Sepultura and Elvis, they’ve developed a very distinctive style and large fanbase to boot. The members of Stellar Corpses are:

The description that best defines the overall feel of Respect The Dead is a mix punk and psychobilly with a few samples sprinkled in for good measure. In fact, “Respect the Dead” kicks things off with one from Return of the Living Dead Part II before transitioning into a fast-paced rockin’ guitar intro. Likewise, the extremely catchy “Cemetery Man” pays tribute to the movie of the same name through its title, lyrics and and excerpts from the film. “Stalking After Midnight” is particularly fascinating to me. It starts off sounding like an old timey country song about a lonely cowpoke looking for love and then BAM! Suddenly the soft guitars rev up and the singer’s voice changes as he sings about his evil motivation for the search. “Dr. Plainfield” is a twisted tune devoted to Ed Gein which features fast paced guitars and excellent drum work (as always) while all my notes about “Pieces of You” are just the word “YES” over and over again.

Things close out with “Leave a Stellar Corpse”, which says “Live fast, die young, leave a Stellar Corpse!” It’s a clever reference to how the light we see from some stars in the sky has taken so long to reach Earth that the star is actually dead by the time we see it. But despite that, we can still see its brilliance in the night. This theme is clearly important to the Stellar Corpse, as it shows up in their later works. According to the lead guitarist/vocalist, “Music is everything to me. It’s my lifeblood. I need to hear it, learn it, write it, record it and perform it live, or I will surely die. I’ve had so many different jobs and I couldn’t stand any of them. Music is the one passion that has kept me completely enthralled non stop every day since I got my first guitar. Society tells you to get a job, but people on their deathbeds always say to follow your heart. We follow our hearts no matter what.” So while a superficial glance at the lyrics might make one think the group is endorsing reckless behavior, what they’re really saying is to follow your dreams.

After years of touring the West Coast, Stellar Corpses has since expanded to performing all across America (and even in Europe). In fact, the subject of today’s review was specifically chosen to help expose the band to the rest of the nation. The idea clearly worked, as they’ve released two more albums since then and are currently in the midst of a 2013 tour. Although this EP is a little over 14 minutes in length, it still packs in a lot of great music. The songs have enough in common so that you can easily determine whether or not you’ll like the band’s output, but at the same time varied enough that the songs never come off as clones of each other. All in all, it’s the perfect introduction to the Stellar Corpses.

I might not know a lot about psychobilly, but I know what I like and I LOVE this. Rest assured that you’ll definitely be seeing more of these guys here at Gravedigger’s Local 16. In the meantime, head on over to their website and join the mailing list to get a free song download!

Special thanks to Stellar Corpses for use of the image!

Bad Behavior has blocked 675 access attempts in the last 7 days.