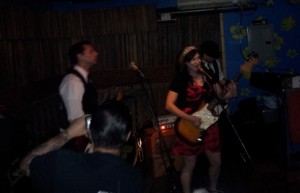 Over the weekend, I was able to catch The Evil Streaks (Weird Jon wrote an excellent travelogue about his trip to see them) at Otto’s Shrunken Head. Always a joy, they were an excellent sight. One of the gents in the audience was wearing a Kings Of Nuthin’ t-shirt. In fact, you can see the back of his head in the shitty picture I took with my cell phone.

The guy is behind Sailor Grave Photography, by the way. He does good work.

So, the Kings of Nuthin’ – I had no idea who these guys were until I saw In Memoriam notices for Torr Skoog, founder and frontman for band, start to pop up. I won’t say that I’m suddenly the biggest Kings Of Nuthin’ fan but it’s clear from whom I’ve talked to that 1) they were awesome live and 2) it sucks that no one is going to see them perform ever again.

A lot of good artists I’ve discovered after a member has died. Frank Zappa. The Cramps. Numerous punk bands and film makers and writers. The first time I hear about someone is usually when their death notice breaks into my everyday life because that’s usually the first and only time that some of these fringe, outsider artists ever get any mainstream recognition. Artists. Thinkers. Writers. They live away from the main stage where the bulk of the audience (call it the mainstream, the general populous) and they do their own thing for a smaller, albeit more dedicated, following. But, when they pass, the MC of the night usually cuts into the cartoon or the opening act’s set to say that those weirdos that most of the world have ignored are now gone and never will be seen again.

Most of the time, these notices are shrugged off and to no surprise. If the majority of the eyes weren’t looking over where those weird performers once were, they certainly aren’t looking now. But, occasionally, there are a few people like myself who catch sight of the negative space, of the void now left. And we often find out a lot of what we missed. It’s a sadness that is not mourning of the artist’s death but a frustration that our ignorance of this individual kept us from enjoying them while they’re alive.

However, one of the greatest aspects of art is that its power often is greater than that of its creator. Whereas the artist will die, art continues on in its place. Art has the potential to reach and affect someone centuries after a person’s death. People are still moved by Bach, Mozart, Stravinsky and more and forever will be. For those of us who discover these artists because of their deaths, we can’t ever say ‘we were there’ but we can go on and have the art be an influence. I may never see the Kings of Nuthin’ play, but I can use their music as an influence, either to write, draw, paint or create or just to keep myself going to the end of the next work day.

The reoccurring trend of discovering someone after they’re dead is one of the main reasons I’ve gotten into this small sliver of horror business. I wasn’t a monster kid but I was always hanging out with dead people, either with their music, movies or books. It’s a slight explanation of why I’m here. When the Obituary acts like your Hit Parade, you’re going to end up creepy and weird.

Still, it’s good to go out and see live music once in a while, so make sure you do so. Catch The Evil Streaks. They’re going on tour soon. And if you haven’t yet, check out Kings Of Nuthin’.