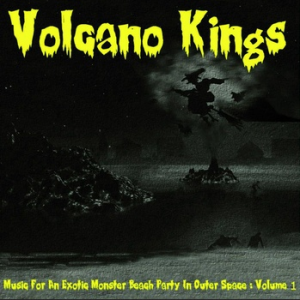 The Rhode Island-based Volcano Kings have one of most intriguing musical styles I’ve ever encountered. Although plenty of the bands I’ve reviewed here cite surf, spy and film western music as influences, only these guys also factor in stuff like prog rock, blues, jazz and industrial music. The Volcano Kings are:

Although founded in 2007, their first release was the Mechanical Beast EP in 2010. It admittedly has very little to do with horror, but the heavy industrial surf feel utilized for much of the album is very moody and hints at the things to come in the subject of today’s review. 2012 was an especially productive year for them, as it saw the release of their soundtrack for the short thriller Trash Day, 11 Ways to Avoid Death in Trash Can City and the subject of this review: Music For An Exotic Monster Beach Party in Outer Space: Volume 1.

“Calling UFO Pork Pie No. 9” sets the tone for rest of album with its horror movie-style organ introduction, opening narration that humorously captures the over-the-top feel of old film trailers and amazing guitar work. There’s also great organ and drum work to be found here. “Space Warp to Zombie Cougar Planet” offers Ghastly Ones-style guitar work and space effects while the light (but eerie) organ work and wailing wind that start off “The Purple and Pink Polka Dot Carnival of Doom” quickly transitions into faster-paced guitars and percussion. In true evil circus style, it slows down for a woozy take on the tune, along with some evil clown laughter thrown in for some good measure. “Vampire Cheerleaders on Crack” reminds me of the surf classic “Miserlou” at some points and “Dracula’s Cadillac” musically conveys the feel of cruising down a road, which is aided by special guest drummer “Uncle” Bob Ferreira (who also performs on the later track “Jungle Terror”). Well, at least until things come to a stop when we hear crashing sound effects. This happens twice during the track and although it’s amusing, I can’t help but wish they included a version where the music is uninterrupted. The last crash has Dracula speak by cleverly using a clip from Lugosi’s “Pull the string” speech in Glen or Glenda to avoid having to pay Universal for the rights to use something from Dracula.

“Drunken Cougars on the Moon” conjures up a sense of slight drunkenness thanks to its slower paced guitars, theremin and work clacking percussion. Its howling wind sound effects lead us into “King Kolasa,” whose theremin and low, slow guitar work create a very serious tone. The groaning voices, soft cymbal strikes and multiple guitar are used to great effect. Said groaning voices return in “Jungle Terror!,” along with plenty of bird and assorted animal calls. I enjoyed its organ work and catchy rock feel. “Theremin A’ Go-Go!” definitely lives up to its name. If you’re a fan of Satan’s Pilgrims, then you’ll absolutely love this track.

The spooky organ-based introduction of “Night of the Crazed Wolf-Woman From Planet Narg” reminds me of an old time radio show, as does the echo-y voice of the narrator. This sequel of sorts to “Drunken Cougars on the Moon” is very low key and features slow paced guitars and clacking percussion. “Zombie Lounge” is an excellent fusion of exotica and surf, with bats and monsters roaring replacing the standard bird calls. The drums and percussion really get to shine here, especially the maracas. Cymbals and drums also get to stand out in “The Creeper,” whose opening scream kicks off some fast paced surf music and energetic piano work. Both the music and the performance by guest vocalists Ron Bergeron and Yvonne Navedo give this the feel of an old school swing song. “Surfing on Blood and Brains” has a soft, relaxing opening with maracas and plenty of sound effects (along with some moody trumpet work) while “Whoooooaaaaah Uncle Bob! It’s a Robot Invasion!” revs things up with Elektro the robot samples and metallic clanking paired with their usual mix of guitars and drums. The extremely catchy “Natives of Transylvania” seems to have an exotica influence, especially due to its focus on drums and maracas. “All Aboard The Hell Train!” starts off with slow, reverby guitars and extra light percussion, only to pick up the pace just like a train and “Surfing on Chainsaws” offers a great, fast-paced blend of drums, organ and guitars. It’s almost frightening how both “Do The Transylvania Twerk!” and “Hypno-Walk” capture the spirit of Frankie Stein and his Ghouls so perfectly. They both have a bouncy, almost cartoonish feel to them coupled with spooky sound effects. The use of a harmonica in “Hypno-Walk” is particularly interesting.

While the band does draw upon a variety of musical influences, the album does stay true to the classic surf feel and is a definite must-have for any fans of horror surf. To date, the Volcano Kings have only revisited the world of horror/sci-fi with the track “Robot Battle Pit 2050” from their 2013 release Night Life. Said release, along with their Corrupt City Blues EP, focuses more on other b-movie genres and also comes highly recommended from me. Here’s hoping that we get a second volume at some point in the near future!

Special thanks to Volcano Kings for use of the image!