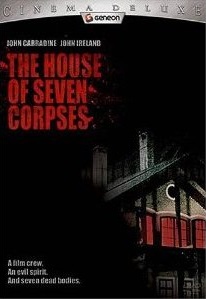 A film crew shooting a low budget movie at a mansion with a history of violent deaths happening in it. With tensions already on the rise due to shooting woes and an overbearing director, things only get worse when mysterious happenings start complicating matters. Could the use of an authentic occult ritual in part of the film be to blame?

Sounds like a great setup for a horror movie, doesn’t it? With great performances by John Carradine, John Ireland, and Faith Domergue (in her final horror role, no less) and spooky atmosphere, it seems like a guaranteed good time. Too bad it’s all squandered on an overly long movie with a hopelessly muddled script. I defy you to make sense of the ending. The film and its advertising seem to hint at the antagonist being undead (but fail to provide any solid explanation for their behavior) but the writer’s official explanation is completely different and has almost no relationship to what we see onscreen! When the movie within a movie’s zombie looks better than the “real” one, you have a huge problem on your hands. It found it particularly hilarious that when the “real” zombie approaches a crew member, the guy in question immediately screams in horror instead of assuming it’s another crew member playing a joke. I also have my doubts about the evil-sounding incantations in the film were actually from the Tibetan Book of the Dead as shown in the film.

I simply can’t understand all the love for this film seems to have online. Yes, the Utah Governor’s Mansion is a cool location and the music is appropriately eerie, but that doesn’t make up for the mess that we get onscreen. Oh, and said music? Most of it is just stock music from The Outer Limits. If you want great music, writing and chills, just watch that series instead!

Although Severin Films recently released this in a Blu-ray/DVD combo pack, my review is based on Geneon’s bargain bin DVD release of the film. Geneon’s release admittedly doesn’t have any extras, menus, or chapter stops! Sadly renting was not an option for me and I can sleep easy knowing I wasted very little of my money on this dud. Apparently this release was just a port of Image’s previous release of the film, which offered an open matte transfer but left the tinting out of the day-for-night shots. On the plus side, the audio was perfectly fine. That link also provides more details on the Severin release, which I can only recommend if you either are one of the people who somehow love this movie or if it turns out the commentary track explains the various plot holes. I’d love to know who was responsible for the fate of Cleon the cat. And even then, only rent this so that the sting of wasting 90 minutes on this mess will be minimized (and make sure to pick up something else that you’re sure to enjoy, because you’re going to need it).

I should also note that, despite all of the past films I’ve reviewed here are in the public domain, I have yet to see any solid proof that this film is PD. I’ve heard people speculate that is the case due to it appearing numerous times on TV and it appearing as part of a budget DVD line, but those are hardly solid arguments. I’ve done a little digging at copyright.gov, which seems to reveal that the film’s copyright was renewed. Just search via registration number for “RE0000861290” and you’ll see what I’m talking about.

Bad Behavior has blocked 2381 access attempts in the last 7 days.