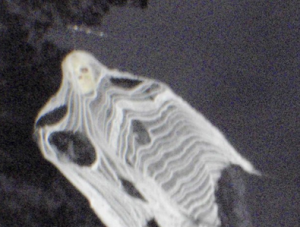 Although Scott Axworthy created what he called the “ghost flight system” in 1988, it was dubbed as the “Axworthy Flying Ghost” (sometimes known as the “Axeworthy Flying Ghost”) when he posted it on the Halloween-L mailing list in 1995. The name’s popularity was only rivaled by that of the prop itself. After all, what haunter could resist the idea of a ghost flying around their yard like the one in this video:

As you can imagine, there are numerous Axworthy tutorials available online, with several having made modifications to the system’s design in order to make it easier and less expensive to build.

There are also several variants of the system that don’t limit themselves to a ghost. In addition to this double ghost setup, the design has also been used to create flying UFOs and even a swarm of bats using this design based around “flying bat” toys. Someone even created an alternative to the Axworthy Flying Ghost, but the original still reigns supreme.

As was the case with the Flying Crank Ghost, a simplified (and scaled-down) version was eventually released in stores. Also like the Flying Crank Ghost, the seeming amount of work needed to create one has prevented it from being better well known outside the Halloween and haunt enthusiast circles. I’ve personally noticed how the basic concept seems to be better understood by the general public thanks to the wider availability of the stripped-down commercial version. But as the video shown earlier demonstrates, building one is well worth the effort and is sure to wow your neighbors.

Special thanks to Jeff Preischel for use of the image!

Bad Behavior has blocked 733 access attempts in the last 7 days.