Creating A Home Haunt For Less Than $100

(or, how I tried to incorporate the NYCC and Welcome To Night Vale into a pun-title for this post.)

One of the more odd yearly October traditions in a city full of celebratory nonsense, the New York City Comic Con kicks off tonight or tomorrow or Friday, depending on what passes you bought. I went last year and though the experience was a positive one, I have no desire to repeat it.

Horror has a stronger presence in these comic-conventions that what I would have thought, but it’s not surprising. Comic book fans and horror buffs have a lot of cross-over, like punk and metal. It doesn’t hurt that there’s a new wave of popularity with television series American Horror Story, The Walking Dead, Hannibal and more. Plus, we’re still feeling the overall mainstreaming of monster movies over the last two decades. 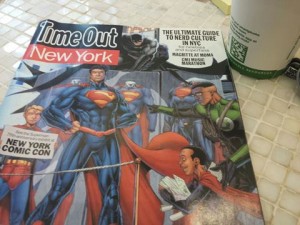 Last year had a gigantic The Walking Dead panel that had people lined up for hours, as well as a rare signing by Terry Pratchett and an appearance of Bruce Campbell to announce the (eventually disappointing) Evil Dead remake. The Walking Dead make a return and this year features Max Brooks talking about his comic line, a screening of Zombie Night with Darryl Hannah, Kevin Eastman talking zombie animals –wait, The Soska Sisters directed See No Evil 2 from WWE studios? Huh. They have a panel on Sunday if you’re interested (if you’re a masochist.)

As always, there’s something for everyone at this massive convention which means there’s a lot of crap with some good stuff in between. One of the events being held is a member of The Thrilling Adventure Hour corporation is interviewing the creators of Welcome To Night Vale, a podcast everyone in the world but me has known about for a while. A twice-monthly half-hour show, it’s a public radio events program from Night Vale, a desert town “where all conspiracies are true.” Being that my iPod shat the bed about a year ago, I haven’t used iTunes so I couldn’t see that it’s the second most popular podcast, second only to the NPR podcast. And it’s the most downloaded of all time or something. It’s popular.  Here’s the panel listing:

Welcome to Night Vale, a scripted podcast in the form of community radio from a creepy desert town, went in a single year from a quiet launch to the #1 podcast on iTunes in 7 different countries. Ben Blacker of The Thrilling Adventure Hour and the Nerdist Writers Panel talks with the creative team behind Night Vale about where the show came from, where it’s going, and what it’s like trying to make a podcast far outside of the usual format.

It’s a free show so you can catch up on all the past episodes. I’ve got it loaded up. Both the above Time Out New York and the AV Club today mentioned Welcome To Night Vale so I suspect it’s one of those alien mental germs disguising itself as a popular idea. I think Warren Ellis made a meme an alien invasion. Someone did. Maybe Welcome To Night Vale is like the last Sutter Kane book of In The Mouth of Madness. Someone better take an axe to your head. Either way, it might be a decent companion piece to your Halloween listening. Find out everything here.