Music to Haunt By: Attrition 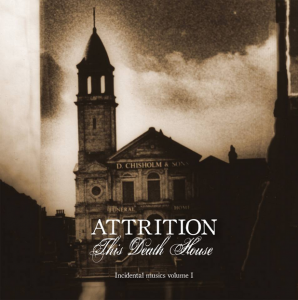 Most of the artists I discuss for “Music to Haunt By” are known primarily for making music specifically intended for use during the Halloween season, but this article is an interesting change of pace. Renowned around the music world for their pioneering work in the electronica, darkwave and industrial genres, the UK-based Attrition has naturally received much praise over the decades. Founded in 1980 by Martin Bowes, the original lineup teamed him with his brother Chris and Julia Niblock. That same year, Ashley Niblock (Julia’s brother) replaced Chris and a drum machine was added to the mix. The rest is (well-documented) history. But rather than cover the works that made them famous, I’m going all the way back to their very first album.

This Death House was originally supposed to be the soundtrack for the role-playing game “Death House.” As the game was never released, the album was retitled and released as a standalone cassette in 1982 under Alan Rider’s Adventures in Reality label (who is also the group’s live visuals engineer). So although the album has only two tracks, each of them is over 22 minutes long!

“Crawling” starts off with a dark and foreboding opening that sets the tone for the rest of the track. There’s electro touches, wailing wind and various noises which remind me of malfunctioning machinery. I found it to be perfect in terms of how neither the music or effects overtakes the other. It’s unnerving enough to use with a variety of settings, but the machine-sounding parts (and really spacey noises about 11 minutes in) makes me think this is perfect for a mad scientist’s lab or an alien-themed room (in a haunt that’s not entirely devoted to aliens). Imagine entering a crashed spaceship and wandering through dimly-lit rooms filled with aliens in stasis capsules, specimen jars and the remains of abduction victims. Did I neglect to mention how some of said victims aren’t quite dead yet? You might even discover that some other extraterrestrial being is the reason the ship crashed…and is now after you. You can even modify some non-alien haunt effects to add some extra scares and encounters with cocoon victims. I can see using this to create a surprise encounter in a room full of alien eggs by replacing the spider with one of these.

“Dead of night” has a lower key opening that slowly builds up. Although more musical than the last track, there’s plenty of effects like pounding, wooshing wind and a police siren-like noises at points. It’s hardy to truly describe it, but it somehow creeps out the listener by making them not sure of what is going on (or what will happen in the future). I can easily see this being used in a haunted factory, vortex tunnel or even in a room where visitors have walk over a bottomless pit (parts of the track might subconsciously make people think of falling).

This Death House is striking effective and foreshadows the band’s future sound (and success). It’s no wonder that it’s been remastered and rereleased the way it has over the years. Home haunters (or those who just want something eerie to play while handing out candy on Halloween) will appreciate how the length of the tracks make them extremely well-suited for looping. Interestingly enough, Attrition has also created soundtracks for films, the most recent one being the horror film G.H.O.S.T.

On a final note, I should explain that the sample from “Crawling” at the top of this review is actually from the album Esoteria: 1982 – 2004. Said album is a great way to get a feel for Attrition, as it offers both dark ambient tracks that are perfect for haunting and great music for general listening. A quick look through the band’s output on Bandcamp shows that many albums either fall into one of those categories or combine the two.

UPDATE: Technical issues are temporarily keeping me from posting the streaming sample track, but I hope to have the issue resolved soon.

Special thanks to Attrition for use of the image!